Kevin is responsible for this special Part 4 report on the Gamo Rocket IGT .177 breakbarrel. He pointed out that I didn’t give the rifle enough of a chance to excel in the accuracy test, and several of you agreed. Even Edith chimed in when she read Kevin’s comment. In light of the leniency I have shown the recently tested Hatsan springers, this is certainly true. I won’t change my normal way of reviewing airguns, but in this instance I can see that it makes good sense to try other pellets in this rifle.

It takes a long time to shoot a 10-shot group, so I resolved to shoot just 5 shots per pellet and see where that left me. If the five were reasonably close, I would complete the group with the other 5 shots.

First up was Kevin’s favorite, and a pellet I’ve found to be accurate in a variety of air rifles — the JSB Exact RS dome, which weighs 7.33 grains. I was prepared to be surprised by the accuracy, but RS domes delivered 5 shots into 1.29 inches at 25 yards. So I stopped shooting them. I remembered that the lighter pellets did worse in this rifle in the last test, so next I tried the heavyweight Beeman Kodiak pellet.

Five JSB Exact RS pellets went into 1.29 inches at 25 yards. No reason to keep shooting them. 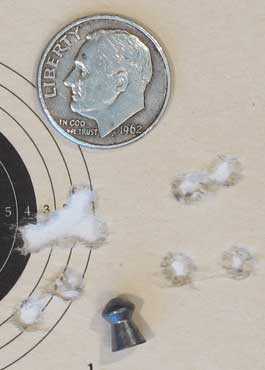 Kodiaks gave me this group. Six of the 10 shots are nicely grouped, but 4 others open the group considerably. This 10-shot group measures 1.257 inches between centers. The smaller group of 6 measures 0.635 inches.

This group made me wonder if I was being consistent enough with the Rocket IGT. Did I “season” the bore with enough pellets before shooting the group? I actually didn’t season it at all, but the fact that the last Kodiaks are as wide of the large group as the first one makes me think seasoning isn’t important here.

Was I holding the gun as carefully as I should be? That was a real concern. I hadn’t put a scope level on the gun, but was I completely relaxing and then shifting the crosshairs back to the target like I should?

Bottom line, I wanted to see another group of Kodiaks. That would perhaps tell me what I needed to know. 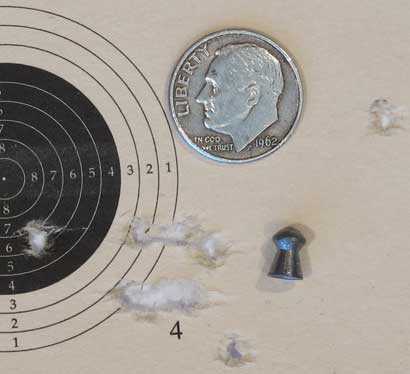 Ten more Kodiaks went into this group that measures 1.906 inches between centers. Eight of those pellets went into 0.784 inches — a group size that I think represents the true accuracy potential of the Rocket IGT.

The second group is very revealing. I tried just as hard to shoot well as I had with all the groups before, and there were no called fliers, but you can see from this group that some pellets didn’t want to play along. That tells me I’m probably not doing something consistently, and it’s affecting the results.

I tried one final group of 10 Crosman Premier heavies, just to see what another heavy pellet might do. This time, the 10-shot group was better than both groups of Kodiaks; but at 0.984 inches, it wasn’t as good as I’d hoped. The openness of this group makes me think that this is perhaps not the pellet for the Rocket IGT.

What now?
I’m not going to give the Rocket IGT a fifth test. I think I did all I could to allow it to shine.

You may not realize it, but it takes a LOT of time to shoot the absolute best you can. It takes me about 5 minutes per shot when I’m really working the artillery hold. I wanted to do this for this rifle because I saw potential trying to peek through.

I shoot hundreds of different air rifles every year and never have the chance to get familiar with any of them. An owner who has just one rifle can, over time, become so familiar with that rifle that he can better than I have. But if I do take the time to settle in for each shot and if I do remove all of the accuracy-destroying variables, we get to see what this or any spring rifle can really do. As this was it.