Today’s blog is a result of several blog reader comments about the BSA Scorpion 1200 SE PCP air rifle I started reviewing for you several days ago. Reader Lee asked if there was any advantage to the higher fill pressure, and J-F followed up with a couple comments of his own. I find this to be an excellent question since it touches the core of precharged pneumatic operations. I thought I’d start a discussion of the impact that fill pressure has on precharged operations.

The modern precharged pneumatic air rifle was built by Daystate in 1980. It was a .22-caliber rifle called the Huntsman that was roughly based on a dart gun Daystate was making for game management. When I got into precharged guns in 1995, I bought a used Huntsman Mk II and was surprised that the maximum fill pressure was only about 2,500 psi. I discovered that by shooting the rifle over the chronograph, which in the olden days was the only way to do it. Nobody published any data on the number of shots a gun got, and this blog was still a decade in the future. At that pressure, I got 30 good shots at 12 foot-pounds. But that raises a good question. What do I mean by a good shot?

What is a good shot?
This is a huge precharged topic and a grand area of misunderstanding. What is meant by a good shot? When I say it, I mean a shot that falls within a tight band of consistent velocity that will enable me to shoot great groups at 50 yards. Regular readers of this blog know what I mean by great groups, but for the newer readers I would define a great group at 10 shots inside a group that measures 0.75 inches between the centers of the 2 shots farthest apart. To me, that would be great at 50 yards.

But when many shooters talk about good shots, they mean that the pellet still comes out the end of the barrel. They’re standing in their backyards. They don’t own a chronograph. To them a good shot is when they pull the trigger and something comes out the end that has the little hole in it. If it also happens to hit the tin can they’re shooting at, it’s a great shot. Yes, people do think this way — even the owners of $1,500 super-dooper PCPs. In fact, there’s good evidence that more people think like this than those who agree with my definition.

So, the more universally accepted definition of a good shot is one that launches a pellet from the airgun. That being the case, there’s a big misunderstanding when it comes to the number of good shots a particular airgun may have. Manufacturers have trended toward publishing the number of shots that will result in the way most shooters define them, while I have always published the number of shots that fall within a tight velocity band. Both numbers are correct, but they don’t tell the same story. I’m going to be sensitive to this difference in the future, and I’ll probably expand my velocity testing of PCPs to accommodate the two definitions when I feel it’s necessary.

Back to the title question
So, what does higher fill pressure give you? Do you get more shots on a fill? Well, which definition are you using? If you use my narrow-velocity-band definition, then the answer is probably no. All a higher fill pressure does is move the starting and ending air pressure levels higher. You may have to fill to 3,365 psi and shoot until the velocity variation exceeds 30 f.p.s., which leaves you with 2,600 psi remaining in the reservoir.

But if you use the broader definition that as long as the pellet comes out of the muzzle the shot is good, then a higher fill pressure will give more shots. You can probably keep right on shooting until there’s only 800 psi remaining in the reservoir, and the shot count will more than double. Of course, the velocity may vary by over 700 f.p.s. from start to finish; but to the guy rolling cans in his backyard, that makes no difference. He begins to sense his gun needs a fill when he starts seeing the pellets in flight and notices how they arc slowly toward the target. I sense a need to refill when my 50-yard, 10-shot, three-quarter-inch groups expand to more than an inch!

Okay — let’s say you understand that there’s a large difference between my definition of what constitutes a good shot and the more generally accepted definition. What should you do about it?

To answer that, you have to ask yourself what it is you want to do with an airgun. Do you want to pursue the ultimate in precision? If so, you probably want to use some variation of my definition of what makes a good shot. The reason for variation is you may not shoot at 50 yards. You may shoot only at 35 yards. If that’s the case, you can accept a wider velocity variation than I. That will give you a few more shots per fill than I get.

Or are you trying to shoot good groups at 100 yards? In that case, you’re probably going to be more critical than I am about velocity variation. You’ll get even fewer shots per fill than I do.

But if you’re just out for a good time with your airgun and your targets are big enough to provide some leeway on where they’re hit, you could care less about the velocity spread. You just want to fill your gun and start shooting. You don’t stop until you can no longer hit what you’re aiming at.

Two categories of precharged valves
Given the discussion above, I see precharged valves falling into 2 categories. The first category is a valve that holds back the air until it’s knocked open. When that happens, it lets the air out as long as it remains open. We call this a knock-open valve. A valve like this gives its most powerful shot as the first shot, then the velocity starts to drop in nearly a straight line. Start to finish, the velocity is always dropping as the shot count increases.

Many of the Korean precharged guns have this type of valve. I remember the old Career 707 lever-action rifles would drop velocity in a straight line from the first shot to the last.

The other category of valve is one that’s balanced to operate within a certain pressure range. By balanced, I mean the following. The weight of the valve return spring is adjusted to compliment the weight of the striker, the power of the striker spring and the length of the striker stroke. The size of the valve seat, which determines the size of the air passage out of the valve, is adjusted to compliment the return spring strength, striker spring strength, striker weight and the length of the striker stroke. You could call a valve like this a “balanced valve” since all these considerations have been balanced against each other. It operates the same way that a straight knock-open valve does, but in this case a lot of attention has been given to the individual firing components. There’s no formal definition for a balanced valve, but these are the considerations that are taken into account when that label is used.

When Crosman developed the Benjamin Discovery PCP air rifle in 2006, they had to carefully balance the valve to work at a fill pressure of 2,000 psi. They were working in unfamiliar territory; because at that time, 3,000 psi was a nearly universal PCP fill pressure. I’d given them a presentation of a PCP rifle that would operate on a lower fill pressure, and I used the USFT rifle made by Mac-1 Airguns as an example of what could be done. That rifle used 1,650 psi to get 55 good shots by my narrow-velocity definition. It did so because it has a huge air reservoir.

The Mac-1 USFT rifle uses low-pressure compressed air but gets a lot of shots that are very close to each other in velocity. It has a delicately balanced valve that uses the air from a very large reservoir.

As a second example, I also told Crosman about a .25-caliber air rifle made for me by Gary Barnes. That rifle operated on a fill pressure of just 600 psi, yet it got 10 shots that developed as much as 27 foot-pounds of energy. That rifle did what it did because it had a valve that remained open for a very long time, and it also had a barrel that was 32-3/4 inches long, which gave the compressed air a long time to push the pellet. 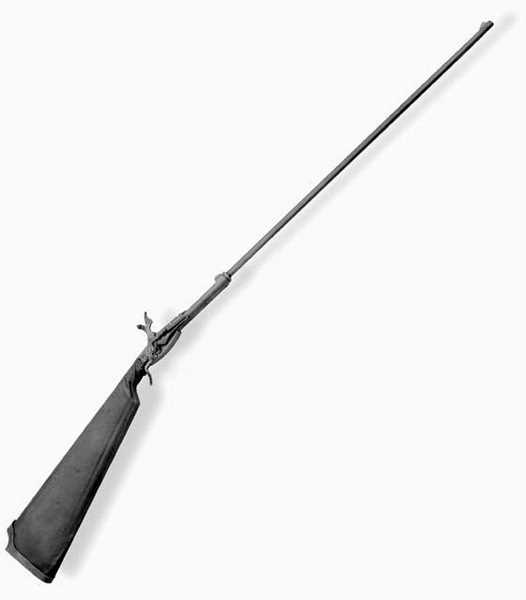 Gary Barnes made this outside lock air rifle in .25 caliber. It was a copy of an 18th century airgun lock whose parts were attached to the outside of the lock. 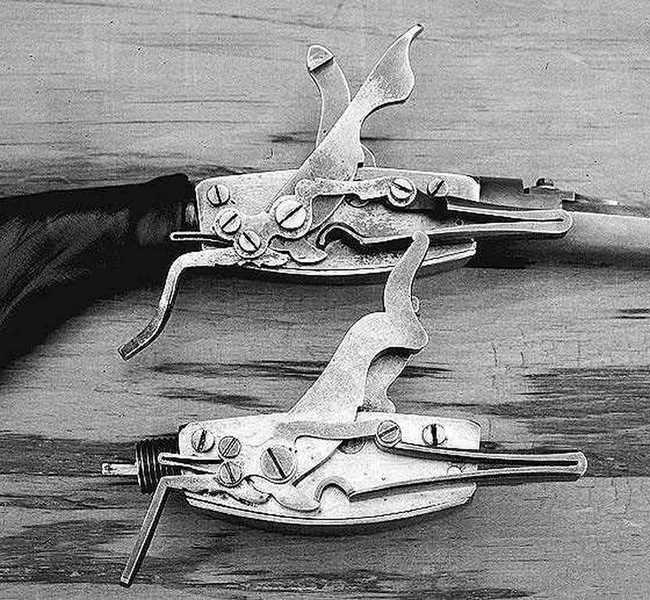 Gary Barnes made the rifle with the outside lock (shown at the top). The bottom lock is a genuine lock from the early 1700s that Barnes used as a model. The way the lock works, it holds the air valve open much longer than a traditional impact valve.

Crosman was amazed to discover that the lower air pressure idea really worked. In just 3 days, they built prototype .177- and .22-caliber rifles from their 2260 CO2 rifle. Once they had the concept down, they fully developed the idea into the rifle that we know today as the Discovery. To keep the retail price as low as possible, that rifle was hardwired with all the lessons they’d learned about air valves.

But one year later, they came out with the Benjamin Marauder, which allowed the owner to adjust the air flow, the striker spring tension and the striker stroke length. This put the capability to tune the gun into the user’s hands. And this report has given you the information you need to understand how it all works.

I will continue to test PCPs like the BSA Scorpion 1200 SE in the way that I always have, and I’ll keep telling you what kind of velocity spread I’m accepting for the shots I call good. But I’ll also shoot these rifles a lot longer, recording the velocities as I go. I’ll give you the data that most backyard shooters never have, nor seem to want. From that, we’ll get a much larger number of usable shots from a fill. And, to paraphrase the Fox News tagline, “I’ll report. You decide.”

35 thoughts on “Air pressure in a precharged pneumatic”