Today’s report is a guest blog from reader Fred from the Democratik People’s Republik of New Jersey. It came from his ingenuity in dealing with a need that arose in the field. I’ve linked it to the recent .177 Marauder reports because it seems to fit.

A number of factors led to this blog — the first being a scheduled benchrest .22 rifle competition my league was going to hold following our 25-yard bullseye competition. The second was, I believe, blog reader John. Or was it Mike? No matter. But whoever made the comment mentioned later in my report…thank you!

I had gone to the range several days ahead of the benchrest competition to sight in my .22 cal. Benjamin Marauder. For fun, I decided to take on the rimfire boys with my air rifle. It took roughly 6 pellets to get the scope sighted where I wanted. However, I could not see where pellet 7 landed. Two more shots and I was incredulous. The rifle had gone from hitting the 10 ring to missing the entire target paper and backer. At this point, I looked at the magazine and discovered it was not rotating to feed the next pellet. It was stuck after firing pellet 6. I assumed the internal spring had broken, so I packed up and went home discouraged. I didn’t have another .22-caliber Marauder magazine, so I might have to use my Ruger 10/22 for the competition.

However, I recalled John (?) mentioning in the blog comments that these magazines could come apart. At home, I carefully examined the magazine under magnifying glasses and saw that what I had believed to be a rivet in the center of the magazine was actually an Allen screw. 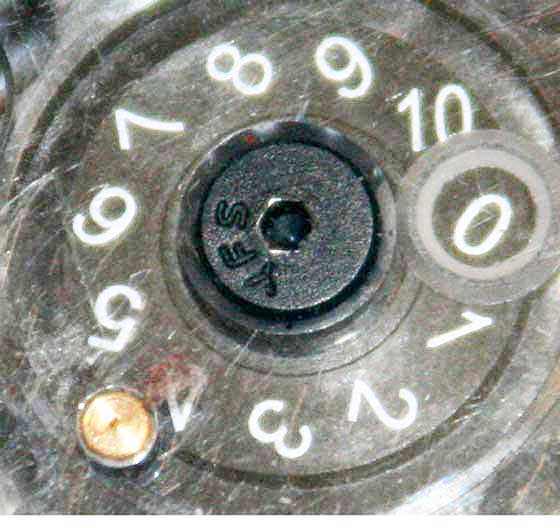 The Allen screw in the center holds the magazine together. I thought it was just a rivet that couldn’t be removed

A 1.5mm Allen wrench fit; after initial resistance, the screw was removed. 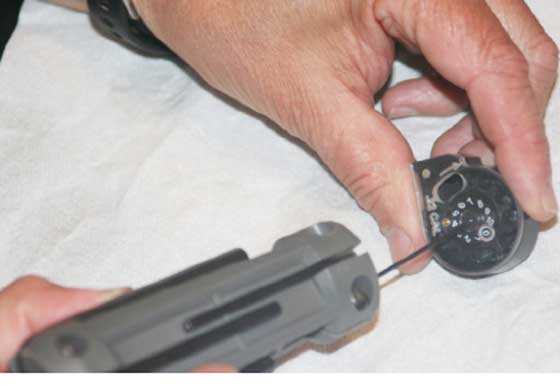 The first several turns met with resistance, then the screw turned freely. The resistance is by design, much like a lock nut, to prevent the screw from backing out.

The magazine is really an elegant engineering solution for the task of feeding pellets with a bolt action. It consists of 5 parts — an outer case, a coiled spring, the circular pellet holder, the clear plastic cover and the the screw that holds everything together. When I disassembled it, nothing appeared broken. 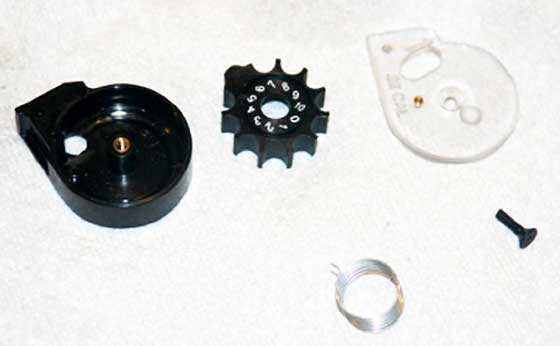 The five components of the Marauder magazine. Note the end of the spring that sticks out.

If you look very carefully at the coiled spring, you will note that the ends are different. While both ends are bent at 90 degrees, one is bent away from the coils while the other end is bent down to stick into a hole in the bottom of the magazine case.

One end of the spring is bent out at a 90-degree angle, while the other end (not visible here) is straight in line with the coils. This is the end that sticks into one of the holes in the bottom of the magazine case.

The end that you see in the above picture goes into one of three holes in the magazine case. Each hole gives a different amount of pre-load to the spring. 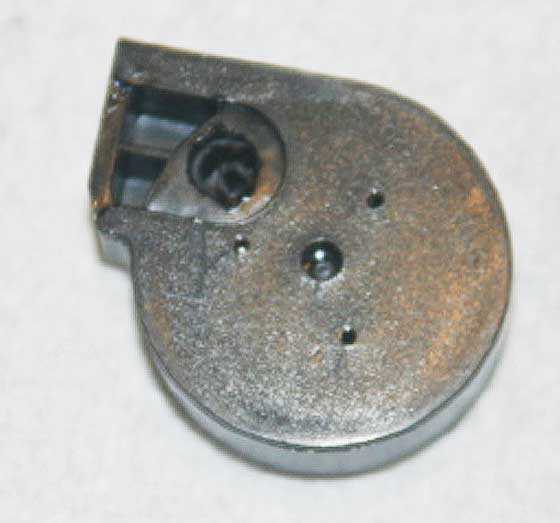 Those three holes at 9 o’clock, 1 o’clock and 5 o’clock (as arranged in this photo) give you a choice where to anchor the spring for increased pre-load. They go all the way through the magazine case.

I decided to insert the spring into the hole nearest the bottom of the case, next to the cutout that slides over the breech when the magazine is installed. In the above photo, that hole appears at the 9 o’clock position, and you can see the cutout that goes around the breech very clearly. 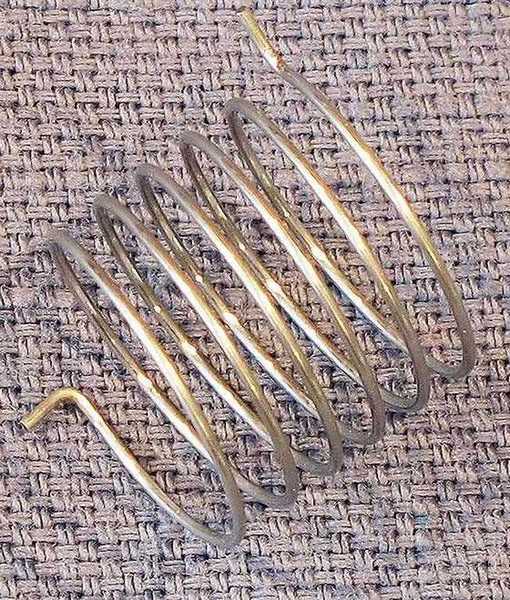 Here’s the magazine spring. Now you can see both ends. The end on the left goes into one of those holes in the bottom of the magazine case, and the end that sticks out on the right fits into the slot on the underside of the pellet holder.

The straight end of the spring that sticks out, away from the spring coils, goes into the slot in the underside of the pellet holder. It’s just a matter of approximating position of the holder’s slot to the spring and moving it back and forth until the spring end clicks in. You easily feel when it pops into the slot. 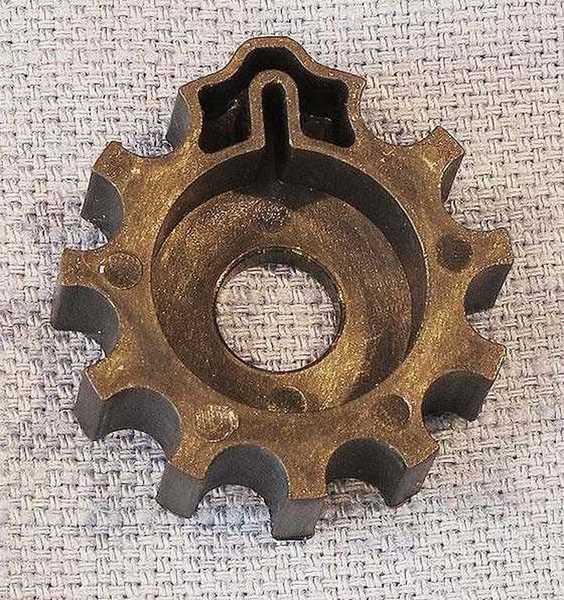 The end of the magazine spring that sticks out, away from the coils, fits into the slot on the underside of the pellet holder.

The pellet holder has a circular groove in it, and the brass pin of the cover moves in it. The groove is almost a complete circle, but the part that isn’t grooved allows the cover to rotate the pellet holder against the coiled spring when the magazine is loaded. 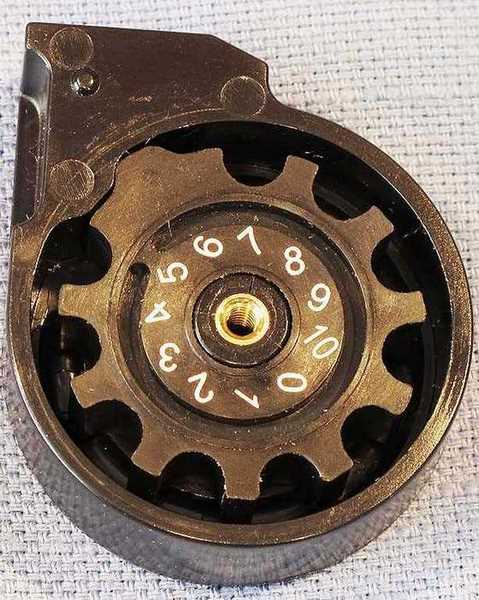 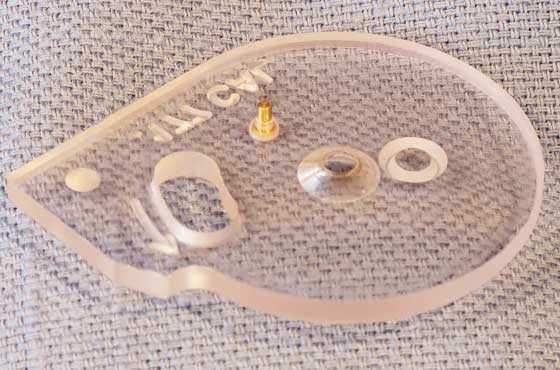 The small brass pin on the underside of the cover engages the circular groove in the pellet holder to turn it for loading. A .177-caliber magazine was used for this photo. 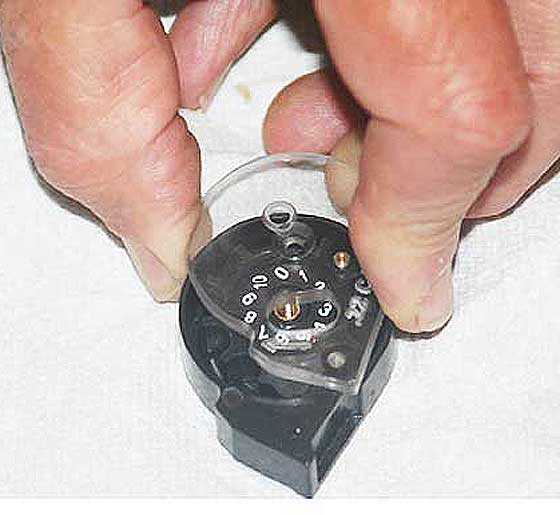 I slide the clear plastic cover over the pellet wheel to keep it in constant contact with the coil spring so the end of the spring would not come out from the notch on the underside of the pellet holder.

The secret of my feeding problem was now revealed. The screw that holds the cover should be tightened only enough to remove any excess slop between the clear plastic cover and the magazine case. Too much tightening and the cover binds the pellet holder, preventing it from turning. The screw has an interference fit so it won’t back out when you rotate the clear plastic cover to load. Lifting and rotating the cover 90 degrees and releasing, the cover now snapped back with authority — indicating the assembly screw was tight enough and the magazine spring was doing its job. I was now set for my benchrest competition.

If this procedure seems confusing, believe me — it clears up when you have the 5 parts of the magazine in your hand. I have given you all of the references you will need to assemble your own magazines, should you attempt this yourself.

[B.B.’s note: I disassembled and assembled my Marauder magazine several times following these instructions. They do work.]