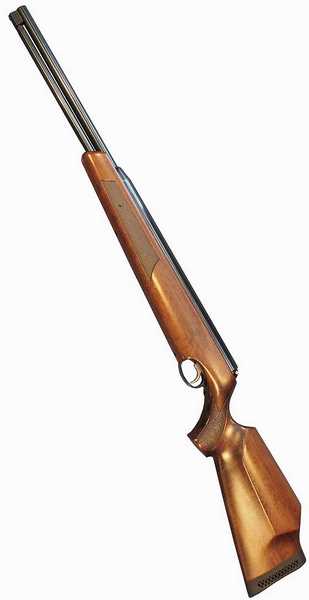 Yesterday, I shot the TX200 Mark III at 25 yards and discovered that it can shoot accurately when rested directly on a sandbag. Today, I’ll take the rifle to the range and shoot it again at 50 yards.

I decided to continue shooting with the rifle rested directly on the bag because it seems to work well, and also because I haven’t settled down yet. The bag-rested results should be a fair representation of what the rifle can do.

The day was dead calm throughout the test. Conditions were perfect for the rifle to do its best. But the results were most interesting and not what I expected.

H&N Baracuda Match
You will recall that, yesterday, I got the rifle sighted-in with the point of impact hitting about quarter-inch high and a half-inch to the left of the aim point. I left the scope setting where it was, so you could see what happened out at 50 yards. I’m shooting with the same H&N Baracuda Match pellets that were used yesterday. 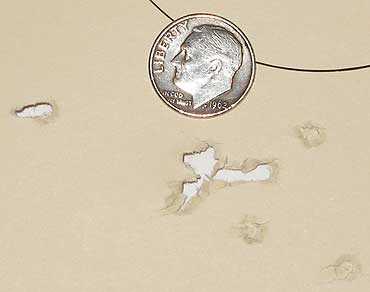 Ten H&N Baracuda Match pellets didn’t do very well at 50 yards. Yes, there’s the one pellet off to the left, but there are 3 more to the right of the main group. Group measures 2.2 inches between centers, with 9 pellets going into 1.199 inches.

The new point of impact (center of the group) is about 2-1/2 inches low and 1 inch to the left. This pellet dropped 2-3/4 inches, going from 25 yards out to 50 yards. The group is pretty large, measuring 2.2 inches between centers. It was shot 2 that strayed over to the left. The other 9 pellets are in 1.199 inches, or about one inch less. That’s still on the large side.

JSB Exact Heavy
Next up were JSB Exact Heavy pellets. They weigh 10.3 grains and are often the most accurate pellets in premium airguns. They certainly were this day, as the first 10 turned in a group measuring 1.042 inches. It was the best group of the day. 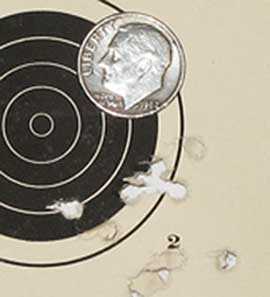 The other 2 groups I shot with the JSB Exact Heavy pellets were larger. One measured 1.289 inches, and the other measured 1.66 inches. I did adjust the scope between groups, but I was careful never to hit the aim point of the target bull. 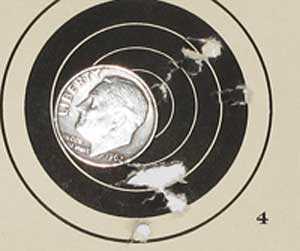 The second group of JSB Exacts measures 1.289 inches between centers. 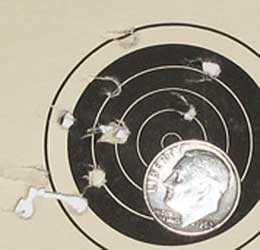 The third group of JSB Exacts measures 1.66 inches between centers.

Crosman Premier Heavy
Seeing that I’d given the JSB Heavys a fair chance, I then shot a group of 10.5-grain Crosman Premier Heavys. They made a 10-shot group measuring 1.365 inches between centers. Since its size is about in the middle of the 3 JSB groups, I think it’s safe to say this pellet is about as accurate as the JSB Exact Heavy. I’m not making any claims, though, because I don’t think I’ve done the TX200 Mark III justice in this test. 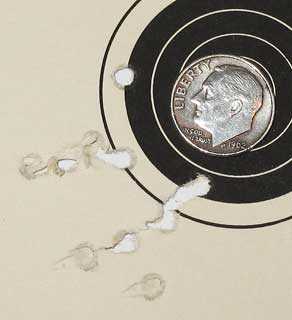 Ten Crosman Premier Heavys made this 1.365-inch group at 50 yards. That puts them on par with the JSBs.

The bottom line is that I’m not satisfied with these test results. I’ve seen this rifle do better, and I believe it still can — I just need to change something. I’ve never before shot a spring rifle directly off a sandbag at 50 yards, but I don’t think that’s the problem. I think I was using the wrong pellets.

Some observations
Remember at the beginning that I told you how far the group dropped when I went out to 50 yards with the 25-yard zero? I also shot the TX200 at 100 yards on this day. I didn’t shoot an entire group, just 3 JSB Exact Heavy pellets. I used the 50-yard zero after adjusting the scope at the range. The 3 pellets went into about 6 inches, but what’s really interesting is the fact that they struck the target more than 2 FEET below the aim point. Don’t let anyone kid you that shooting at 100 yards is simply double shooting at 50 yards. The transition out to 100 yards is very dramatic! I did this just as an aside to see what would happen. Well, I saw all right!

I also think by shooting only heavy pellets on this day that I hindered the TX200’s chances to shine. I want to rerun this 50-yard test with some lighter pellets that are known to be accurate. Someone asked me about that already, and I think it needs to be tested.

Finally, blog reader Tunnel Engineer asked me to try resting the TX on the sandbag close to the triggerguard and again out at the cocking slot. He wanted me to compare group sizes and point of impact with the 2 balance points. But the bag I use is very long and runs all the way from the triggerguard to the cocking slot, so I don’t see how I can do that.