The suggestion for this report came from blog readers ricka and Terd Ferguson, who both expressed concerns over the safety of precharged airguns. That’s safety…as in wondering if one can blow up!

It’s been a long time since I felt those same concerns, but I did at one time. Before I got my first PCP in 1995, I was quite concerned about keeping a scuba tank filled to 3,000 psi in my house. I’d seen the movie Jaws and was suitably impressed when the shark was blown up by a scuba tank at the end. So, these two readers are probably expressing the same concerns that hundreds of you share. I’d like to address those concerns in what I hope will be a straightforward series of reports that are easy to understand.

Do firearms blow up?
Veteran readers of this blog know the answer to that. Firearms do blow up, and I’ve shared at least one such personal story with you — my Nelson Lewis combination gun. I overloaded it and blew the percussion cap nipple out of the barrel! You can read that report here. In retrospect, it was my fault, so we can call that experience a stupident.

I’ve been involved in two other firearm blowups. One was caused by a rim failure in a .17 HM2 rimfire cartridge, and I’ve since come to find that this cartridge is known for that weakness. When it happened to me, shards of hot brass blew out the ejection port of the 10/22 clone I was testing for Shotgun News. One piece of brass cut my right arm and drew some blood; but aside from that and a lot of extra noise and smoke, no other damage was done. That event was out of my control, so it was an accident.

The other blowup was caused by a squibb round (one without gunpowder that drives the bullet into the barrel but not out again) in a Colt SAA revolver. I was firing very fast; and when the squibb happened, I was unable to stop before I thumbed off the next round. The revolver’s barrel was split lengthways when the second bullet hit the first one halfway down the barrel. That wasn’t an accident — it was a stupident.

Shooting a round into a bullet that was already lodged in the barrel burst this 7-1/2 inch Colt SAA barrel. The bullet was struck where the ejector housing screw was.

Do precharged airguns ever blow up?
Yes, they do. The causes are as random as they are with firearms, and the results range from sudden surprises all the way to death. The blog readers are entitled to a frank discussion of the kinds of accidents that can happen with precharged guns, and that’s what I’m about to give you.

When I bought my first precharged rifle—a Daystate Huntsman—and a brand new 80 cubic-foot aluminum scuba tank, I was properly awed. No, make that frightened. It was not unlike setting off my first charge of TNT in the Army! I respected the power potential of both that dive tank and the airgun I was filling.

Like any new thing, though, this awe and respect lasted only as long as it took me to become comfortable with the technology. If you do something enough times, the edge of respect starts to wear off—I don’t care what it is. It isn’t good when this occurs, but it’s human nature. Familiarity breeds contempt.

Boom!
And then it happened. My gun blew up! Okay, it wasn’t actually the rifle; it was the hose that connected the rifle to the scuba tank. And to be honest, it didn’t really blow up. The soft wall of the rubber hose ruptured, violently releasing compressed air. The tear in the hose wall was about one inch long, and the warning signs were there before it happened. The hose had developed a noticeable bulge at the point the blowout occurred. That should have told me that the reinforced fabric liner under the outside rubber was failing, but like I said—familiarity breeds contempt. And I didn’t want to stop shooting my airgun. I took a risk and the explosion happened.

I was standing in my basement when the hose blew. The noise sounded like a concussion grenade, although I’m quite sure it was nowhere near as loud or forceful. The blast loosened a storm of dust from the floor joists above my head; and my wife, whose office was right above me, jumped out of her seat.

The net result was no injury to me, beyond a bruised ego, and no physical damage to anything other than the now-ruined hose. I was momentarily stunned, and it took about 15 seconds before I regained my bearings, because Edith had already gotten to the basement before I turned off the tank’s air flow.

I shared my experience with other airgunners who were more acquainted with precharged airguns and was told I had been lucky the hose hadn’t broken off completely, whipping me violently before I could turn off the scuba tank’s valve. That was when I discovered that nearly everyone who uses precharged airguns has either had an incident like this happen to them or knows someone who’d had one.

Can this be avoided?
Can this kind of incident be avoided? Absolutely! There are several things you can do to keep this from happening. First, if you use microbore air hoses, the likelihood of blowouts is reduced — not eliminated, just reduced. Microbore hoses carry the same internal air pressure as regular hoses, but the surface against which the air presses is so much smaller that it reduces the amount of stress on the hose material. However, most microbore hoses are stiff and will eventually soften at the point at which they are bent. That’s usually up near the tank, where they come out of the tank’s air valve. You still have to watch for that, because when they soften, they also weaken at the same spot. The hose I have linked to in this report has springs on both ends to prevent this bending to a large extent — but you still have to look for it.

Another safety measure is to use a hose that has a braided steel sheath on the outside. This sheath keeps the rubber that’s underneath from expanding and blowing out. The hose that blew out on me was an early rubber Daystate hose that had just a 3,000 psi rating. It was rated for nearly the same pressure it worked at (2,500 psi), which isn’t good. The hoses with braided steel sheaths are rated much higher. 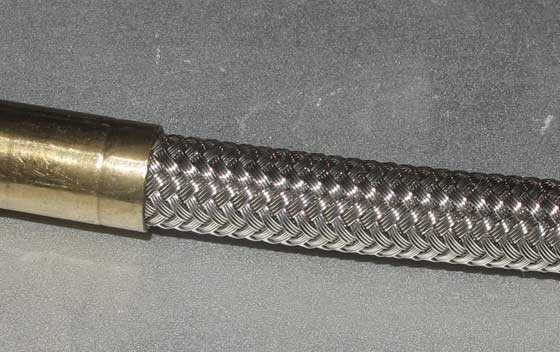 The stainless steel wire braiding on this air hose will prevent it from blowing out.

The most important safety measure is you! Examine your fill equipment every time you use it; and if you spot something like I did, you stop right away.

Another type of stupident
If you fail to fully connect the two halves of the Foster quick-disconnect coupling during a fill, the air pressure will disconnect it for you! It will be accompanied by a small explosion and often by the violent whipping of the air hose. Here’s another place where a microbore hose protects you because it doesn’t whip as much, plus it’s smaller, so it doesn’t hurt as much when you get hit. But the best thing is to never get hit at all. When you make the connection, listen for the click of the knurled ring on the larger female fitting as it snaps into position. That indicates that all the ball bearings inside the coupling are now safely inside the groove of the male fitting. 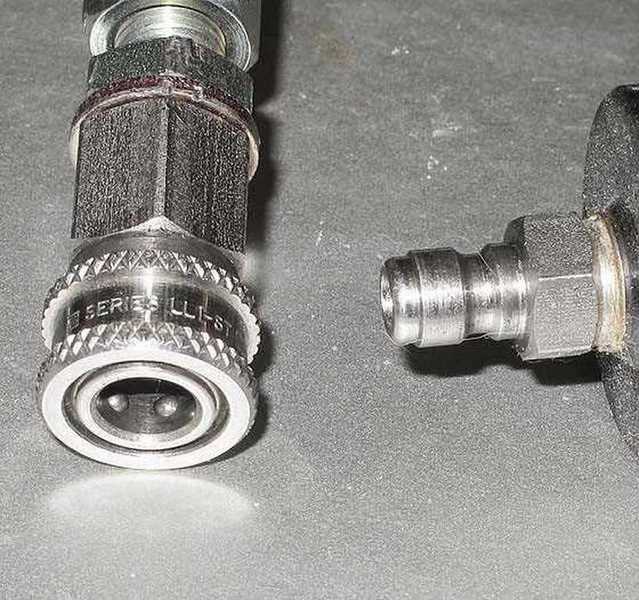 This female Foster fitting (left) has a spring-loaded collar that pulls back to allow the ball bearings to move outward. They go around the flat spot on the male fitting on the right, then the spring pushes them into the groove. They will hold the two fittings together under pressure, but only when the ball bearings are in the groove. It’s important to hear the two parts click together.

Summary
That is as far as I will go in this report. I know how important this information is for many of you, so I promise to come back to this quickly for part 2.

For now, however, I want to leave you with this thought. I’m being honest with you about the potential dangers that are present whenever precharged airguns are used. You have to keep an open mind about this because the things I’m presenting are not that common. They do happen and most of them can be prevented by the means and methods that we’ll discuss.

Operating a precharged airgun is no more dangerous than having a gas-fired hot water heater in your house or operating a lawn mower. There are things to be aware of; and if you follow the rules, no harm should come your way.

In 2009, I gave Pyramyd Air two articles about the basics of precharged pneumatics:

While I put a lot into both articles, there will be new things in this series of blog reports.

What’s the difference between a laser & a red dot?