A couple weeks ago we had several comments that said there are people who believe all pellets are the same, and it doesn’t matter what you shoot in your airgun. Then others chimed in and said the same is true for .22 rimfire ammo. Well, I started a test of .22 rimfire ammo last week and hope to finish it soon, but today I thought I’d start exploring the pellet side of the question.

Today was supposed to be a first look at the accuracy of the BSA Supersport SE; but for the first time that I can remember, I couldn’t get the open sights on target at 25 yards! I didn’t want to fool with the rifle for a long time, so I set it aside and picked up my super-accurate Beeman R8 Tyrolean. That’s a rifle I know I can count on.

My original plan was to buy .177 pellets from wally world and pit them against the best premium pellets I have; but since this was a last-minute test, I just selected some pellets from my supplies. I made this a Part 1 because I still intend doing what was planned.

Today, we’ll look at 4 pellets. Two are what I consider premium, though one of them is pointed and I usually don’t shoot pointed pellets for accuracy. That should be interesting.

The other 2 pellets are ones I actually bought at a discount store some time ago. They’re representative of what’s out there right now. One’s a wadcutter; but since I’m shooting indoors at 25 yards, I felt it might still do its best. The other is a pointed pellet that Crosman made for Remington several years ago. These 2 pellets are the ones I believe will not do well.

I shot the rifle at 25 yards rested directly on a sandbag, which I’ve determined works well for this gun. In the entire test, there were no called fliers.

Air Arms Falcon
The first pellet I tested was the Falcon from Air Arms. It’s made by JSB on dies owned by Air Arms, so there’s no equivalent JSB pellet. There are several that look similar, but testing shows they perform differently. Ten Falcons went into a group that measures 0.667 inches between centers. You can see a single pellet hole to the right of the main group. That was the third shot. Nine of the 10 pellets went into 0.399 inches. 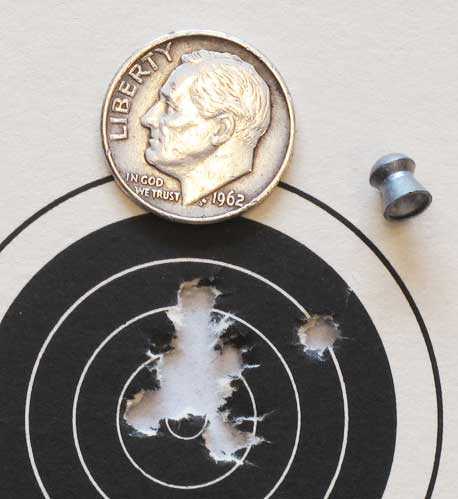 RWS Superpoints
I normally don’t recommend pointed pellets for accuracy; but 25 yards isn’t that far, and RWS pellets are certainly in the premium category. I didn’t expect RWS Superpoints to do as well as the Falcons…and they didn’t. But they were close! Ten made a group measuring 0.732 inches. Once again, one pellet was outside the main group, and 9 pellets went into 0.43 inches 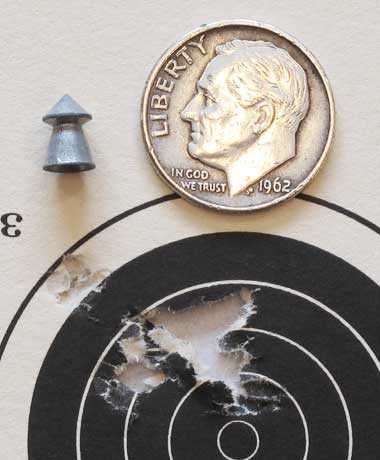 Now, it was time to test the 2 pellets in which I didn’t have any faith. I still tried as hard as possible to shoot the best group. Frankly, I’m surprised they did as well as they did!

Daisy Precision Max wadcutter
The next pellet was a older pellet I had that is similar to the Daisy Precision Max wadcutter — a flat-nosed target pellet. I didn’t expect it to do much, but 10 of them went into a group measuring 0.804 inches. And, to be fair, 9 of them are in 0.591 inches. While that’s not great for this particular rifle, it’s a lot better than I expected. 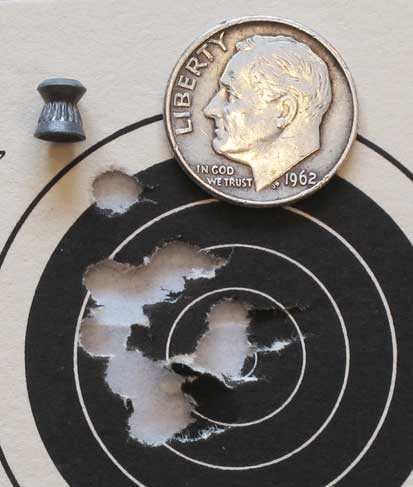 Ten Daisy Precision Max wadcutters made a larger group at 25 yards, but it wasn’t as big as I expected. This group measures 0.804 inches, with 9 pellets in 0.591 inches.

Remington pointed pellets
The last pellet I tried was one Remington sold for many years, but one that Crosman made. So, it has a sort of premium heritage, though the discount store pellets that Crosman sells (which is where I got this tin) are not normally as good as the ones they make for their cardboard boxes — by which I mean Premiers, of course. I didn’t know what to expect from these pellets. Ten went into 0.821 inches, which is better than I expected, and 8 of them went into a group that measures 0.402 inches. That’s hard to argue with. 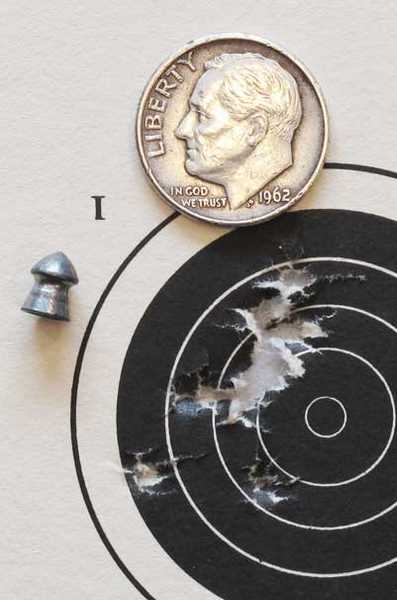 The results?
This test worked as expected, but it wasn’t as conclusive as I’d hoped it would be. Clearly, I need to look harder into these discount store pellets.

The Beeman R8 rifle is really an accurate platform that makes all these pellets look good. I think it’s a great testbed, but I won’t rule out trying the same test with a different rifle at a later date.

I could run the test at 50 yards, and the groups would all open up a lot — but that isn’t what I’m testing. Most airgunners don’t often shoot at 50 yards. I think 25 yards is more representative of what they do most of the time. I think I’ll just stick to the original plan of buying some representative pellets at a discount store and pitting them against the best premium pellets I have. 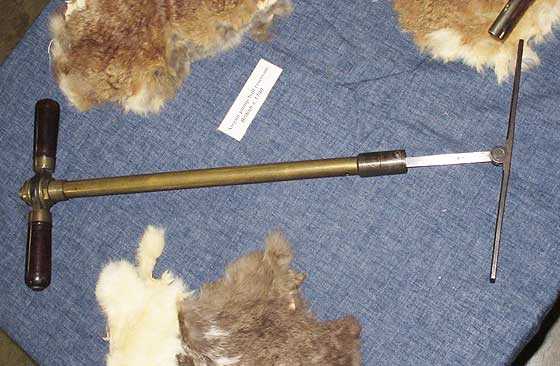