• What color temperatures mean
• Digital cameras changed everything
• Using light
• First, a look at the lights
• How the lights are used
• Light is a key element in photography


I’ve been asked several times to describe the kind of lighting I use to take my pictures. I’ll show you what I use. I’ll also discuss what to do and what not to do with incandescent lighting.

Today, I’m going to show you some uncropped pictures, so you can see what things look like before I clean them up. That may be the most instructive thing in this report.

Back when we used film, we bought our film in temperature ranges, too. There were cool (daylight) films and warm (tungsten) films, and we matched these to the light we expected to use. Sometimes, we had to correct the available lighting with filters. If we were using a warm (tungsten emulsion) film with tungsten (incandescent or indoor) lighting, the picture came out pretty close to what the eye saw — the whites looked white and so forth. But if we used tungsten film outdoors in daylight, everything tended to have a very bluish cast. And daylight films used in tungsten light tended to look yellowish-orange. We used gel filters over the lens to correct for this.

There are other types of light that cause problems, as well. Fluorescent lights cause a greenish cast to the image. Digital cameras usually have settings that can be selected to correct for the lighting — or you can set them on automatic and the camera’s software does all the work. I usually let the camera do the work unless I want a certain effect.

I will not get into reciprocity failure, which is the change in the film’s response to light the longer it remains exposed. I’m mentioning it only because we have several photographers reading the blog, and they may want to touch on the subject. Suffice to say that because film relies on chemistry, things are not as straightforward as I’m reporting. There are many subtleties to consider. Film photographers had to look at more than just the light source and the type of film being used; they also had to consider the exposure time and how that particular film changed as the exposure increased.

Digital cameras changed everything
Digital cameras changed the way all of this works because they have software to compensate for things like exposure time and color temperatures. As long as your camera is set to automatic, the computer is handling everything and you get the best image possible, meaning the image that’s the most neutral. But sometimes that’s not what you want. Sometimes, it’s important to see detail more than it is to see the correct color. Edith and I disagree on this all the time. I always go for maximum detail, with the result that you may see a black airgun with a golden or even whitish cast. She values color fidelity over detail and will correct my images to the right color at the expense of losing some finer points. [Note from Edith: I don’t see any reduction in finer points, so that means I’m right!]

Allow me to show you how this works. The following two images were taken with the same light, but different camera settings.

In this image, I let the camera filter the light for me by using the automatic setting. There was a little daylight coming through a window and a lot of reflected incandescent (tungsten) light shining on the subject. This is a neutral exposure.

For this exposure, I set the camera on daylight. It thought the light on the subject would be daylight; but since it was mostly tungsten, the image has a yellowish-orange cast. Same amount of the same light in the same position — just different camera settings.

But even at that, I can get finer details with a digital camera than I can with a film camera. And Edith can often correct the color balance in Photoshop, so we often both get what we want. I won’t get into that (correcting images) today, but we did look at it to some extent in the last report.

Reflected light is more diffuse. Like the light on an overcast day, reflected light seems to come from all directions and causes no shadows. It’s perfect for showing details. In fact, before I learned how to use interior lighting this way, I took most of my pictures outdoors on overcast days, or I took them on bright days, but in the shadows where sunlight couldn’t reach my subject. I’ll now show you how I use reflected light.

First, a look at the lights themselves
I use a Tota light. Tota is a brand name of the Lowel company that uses quartz bulbs of various strengths. I use 500-watt bulbs in mine, and they last for many years. The Tota light fixture has side reflectors called barn doors that allow me to concentrate or scatter the light as I choose. 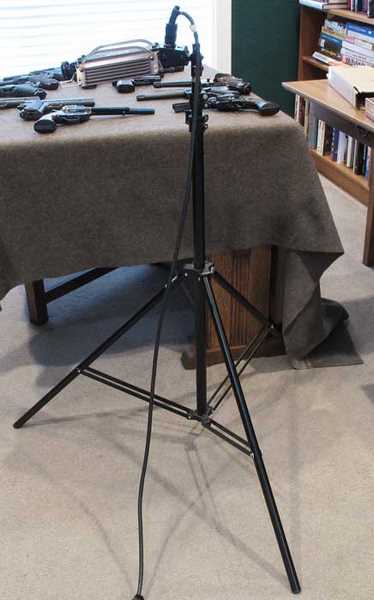 This is one Tota light fixture standing in front of a table full of guns. 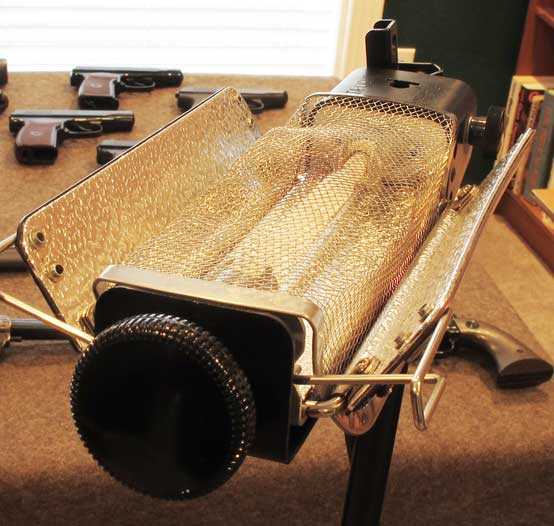 This is the Tota light fixture turned upside-down. It’s jointed to turn in all directions. The barn doors are the flaps on either side of the central fixture, and here they’re closed. There’s a screen over the bulb for safety in case of a bulb explosion. 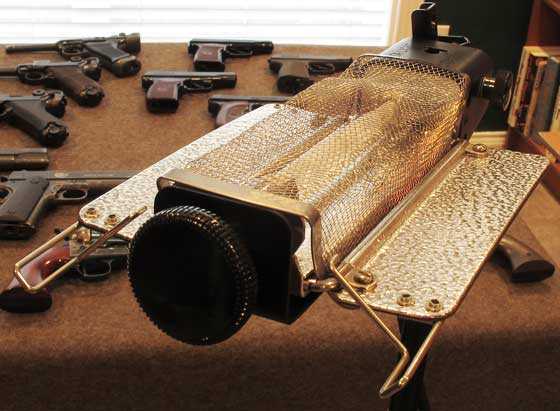 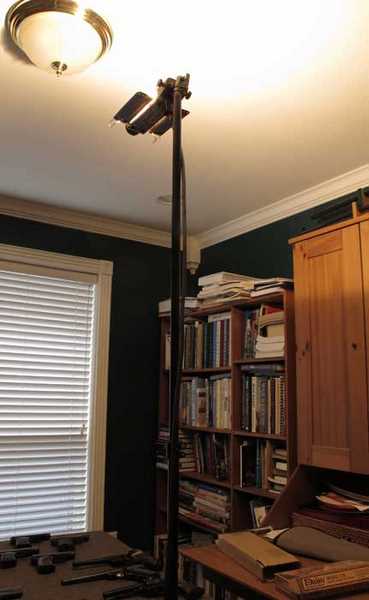 I have extended the Tota light to 7 feet and am bouncing it off the white ceiling. Objects on the floor below will receive scattered light from this. If I wanted the light on the subject to be even more diffuse I would not put the light fixture this close to the ceiling.

How the lights are used
I can use one, two and even three lights, though I’ve never used more than two in the 16 years I’ve been doing this. Since the light is scattered, you don’t need many sources. I normally use one light because it creates fewer problems.

Remember “painting with light,” which I wrote about in another 3-part photography series on this blog? That was a tip I described to you in 2008, where you use very little light over a long exposure to get light on all the places it’s needed. A small $10 tactical flashlight can do the work of $1000 worth of studio lighting, as long as time is factored in. I also showed you what specular highlights are in that report. You can do the same kinds of things with indirect lighting to enhance the effects. Let me show you what I mean.

In two of the next pictures I’m not cropping out anything. You’ll see my feet, the tripod’s feet and various other things in the frame, along with the subject. Several of you asked about this, so I thought I’d show it to you today. The point of the next photos is to show how you can paint with diffuse reflected light like a Tota light and make one light fixture do the work of many. These pictures were all taken using the reflected light you see in the last picture, above. 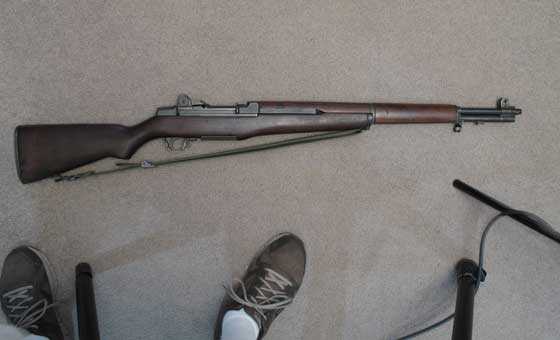 I’m using a single Tota light reflected off the ceiling for this shot. The Garand is illuminated more toward the front of the gun, leaving the butt dark and featureless. Those are my feet, the tripod’s feet and the Tota light’s feet in the image.

Here is that same image cropped, with the Tota light leg Photoshopped out. If this was going in a report, I might put the rifle on a 45-degree angle to make it larger, and knock out the background to make it stand out. But the butt would still be dark, and fixing it would take a lot more work. 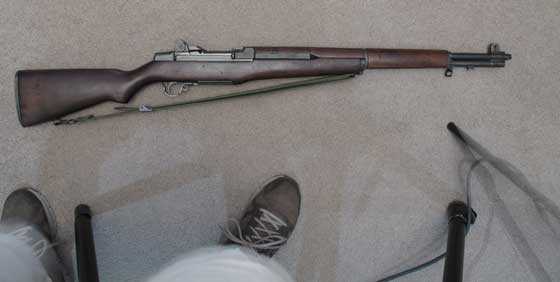 Same image but I moved the Tota light during the 1/2-second exposure. You can see the blur of my pants legs and the legs of the Tota light stand. The rifle is lit more evenly.

Here, I have cropped the photo with the more even light, and I’ve gotten rid of the Tota light stand’s leg. Notice the butt has some light on it in this image. This will need less work in Photoshop to look good.

I’ve shown you two images with subtle differences in this report. Because of the limitations of the internet (72 dots per inch resolution), I can’t show these differences in their finest detail. But if I were to make the rifle 13 inches long at 300 DPI for a magazine, you would see a much greater difference between the two photos.

Light is a key element in phtography
Product photography is the art of making things appear in images as though you’re seeing them in person. Light plays a huge role in this, and I hope today’s essay has shown you how you can use indirect lighting to your advantage. Tota lights are not expensive, but you can do everything I’ve shown here with common quartz shop lights that you buy at a hardware store.

One of the best images I ever saw that used this technique was of the interior of a dark church. The photographer went in at night when there was no light and simply opened his camera’s shutter. Then he walked around the room firing a camera strobe about a dozen times in different places. The resulting picture looks like the church is illuminated with dozens of bright lights that can’t be seen. The photographer painted that large room with light! 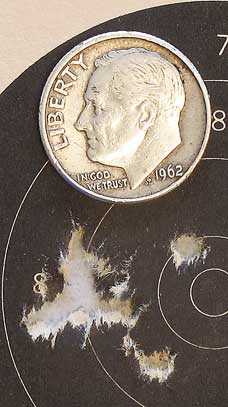 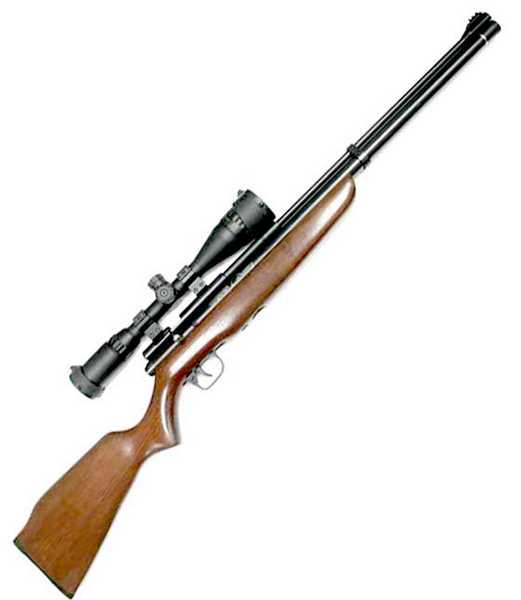