The Texan from AirForce Airguns is a .458 big bore to be reckoned with. The 4×32 scope and bipod are optional accessories.

Note: I just found out the scope is not included with the Texan. I’ve added a note to part 1, where I originally mentioned it was included.

Before I begin, I’m asking the organizers of airgun shows around the country to please send me their show information. Several readers have asked me for this information, and we need to publish it in a place everyone can find. The North Central Texas airgun show will be held at the Parker County Sportsman Club in Poolville, on Saturday, August 29. Send your airgun show info to [email protected].

Today, we’ll look at the AirForce Texan big bore rifle in closer detail. Part 1 was just an introduction to this interesting big bore. It stirred up a lot of interest, but after seeing all the other new big bores at the SHOT Show and listening to the conversations about them, I know I need to describe this one more precisely.

Power
First, let’s talk about power. Most big bore air rifles don’t produce more than 200 foot-pounds of muzzle energy, and a couple of them are closer to the 100 foot-pound mark. There’s nothing bad or wrong with that, except when people start using the term big bore indiscriminately — as though it defines power. Then, things get confused.

During our roundtable discussion while filming American Airgunner at the show, Jim Chapman said he would like to see the term “medium bore” used to describe those guns that are larger than .25 caliber but still have lower muzzle energies. He never specified what the power cutoff would be for that term.

I was opposed to that idea. My feeling is that the term big bore describes the bore size, only (all airguns with bores larger than .25 caliber are big bores), and the energy potential has to be addressed separately. I feel that trying to create special labels to categorize airguns gets us into trouble. It’s where confusing terms like “hard air” (a meaningless term for pellet and BB guns made up by those who also sell airsoft guns) come from, and it’s the reason why young people who are not shooters are calling bolt-action repeaters single-shots because something has to be done manually (working the bolt) before each shot.

I’m using the tern big bore for all airguns with calibers greater than .25. And the guns that shoot .257-caliber bullets (instead of diabolo pellets) fall into the big bore category for me.

The Texan produces a potential of more than 500 foot-pounds, depending on the bullet used. And, today, you’re going to see what a broad range of power a gun like this has. So, to understand what I’m talking about, we’ll define the gun by its power potential and forget the fact that it’s a .458 caliber. There are other .45-caliber air rifles that barely produce 200 foot-pounds. Anything I say about the Texan does not also hold true for them.

Air pressure
In Part 1, I told you the Texan is a remarkable new air rifle. Now, I’ll tell you exactly why. All other big bores that achieve 500 foot-pounds of muzzle energy and more use air at a pressure above 3,000 psi — except for the Quackenbush Long Action Outlaw. The Texan and the Outlaw, alone, are able to make 500 foot-pounds on just 3,000 psi.

If the whole truth is told, you can fill a Quackenbush rifle above 3,000 psi and get a little more energy from it. Not so with the Texan. The Texan has a carefully balanced valve that does not respond well to over-pressurization. In fact, I’m about to show you that the Texan’s powerplant has to be tuned to the specific weight bullets you’re shooting. When I used pressures above 3,000 psi in my testing, the initial velocities fell off. And don’t think that you can add weight to the striker to overcome this. The valve, itself, is very carefully balanced and will not respond positively to home gunsmithing.

But this isn’t a negative! You are getting more power from less air than any other big bore airgun on the market. I will show that today, as well. So, if you’re going to get a Texan, do so with the mindset that AirForce has done everything right up front, and all you have to do is follow their instructions.

The bullet weight tuner
Usually, my feature articles in Shotgun News are good because I have unlimited space to explain things in detail and show detailed closeup photos. But the article I wrote about the Texan was edited heavily and lost several key photos. The text explained what you’re about to see, but without the picture it didn’t make much sense.

The Texan has to be tuned or adjusted for the weight bullets you’ll be shooting. That’s because the valve takes the bullet weight into account in a way that may seem counterintuitive. Usually, when we think of more power in a pneumatic, we think of increasing the striker weight or the tension on the striker spring. But that’s exactly the wrong thing to do with a Texan! When you want to use a heavier bullet in the Texan, you need to DECREASE the striker spring tension. That’s because the heavier bullet remains inside the barrel longer, providing back pressure that also holds the valve open a little longer. 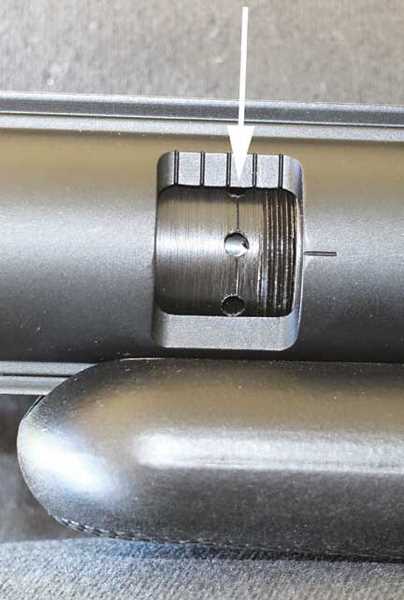 This wheel on the left side of the frame is for tuning the powerplant for various bullet weights. It’s not precise. AirForce left off the numbers because they don’t want people to obsess over certain settings. The marks are just for general reference. Read the text where I describe it.

You’ll notice that the bullet weight tuner has no numbers. It’s just a simple wheel with a few lines for reference. That’s because people tend to obsess over the exact settings on other AirForce guns, and they discuss them as if they’re absolute and carry over from one gun to another. You read about people arguing whether they should shoot an 18.1-grain pellet with a power wheel setting of 12.9, or 12.4, when the truth is that each gun is unique unto itself. What works for one rifle won’t work the same for another.

The Texan’s bullet tuner works in a similar way. It’s not really a power adjuster. It simply compensates for the length of time a specific (weight) bullet will remain in the barrel. You make large changes when shooting bullets of a different weight. Small changes on the wheel don’t really matter that much. I’ll explain more in future reports, but right now I’m going to talk about the bullets that were tested.

The bullets
I started shooting the Texan last July, when there was only one working prototype. As the months passed and small changes were made, the rifle’s performance also changed. AirForce experimented with many different lead bullets, barrel lengths and rifling twist rates — as well as some other projectiles like sabotted bullets and round balls. 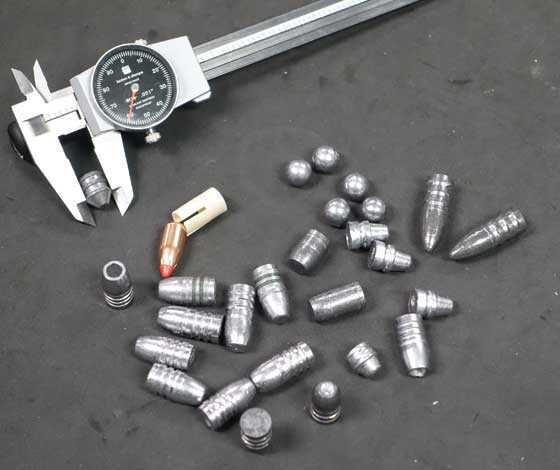 These are a few of the bullets AirForce used when testing the Texan.

About this same time, Johnny Hill, one of the owners of Tin Starr bullets in Weatherford, Texas, (817-594-8511 [email protected]) discovered AirForce airguns and became a dealer. Tin Starr is a company that makes lead bullets for cowboy action shooters, and Johnny asked me what bullets I thought might do well in the Texan. I thought the rifle should do well with a 405-grain slug, but Johnny thought that some pistol bullets might also do well if they were cast and sized as 0.458 instead of the 0.451/.452 size that pistol bullets usually are.

He made several custom molds and hand-cast several hundred pure lead bullets for my testing. Of the different shapes and weights he supplied, 4 stood out as extremely accurate in my test rifle. When I started testing, I thought my own cast 405-grain bullets might do the best, but mine are slightly harder than pure lead (mine are a hardness of 6, where pure lead is a 5). Tin Starr has discovered how to cast pure lead and still get bullets that are well filled out — something that’s supposed to be impossible. 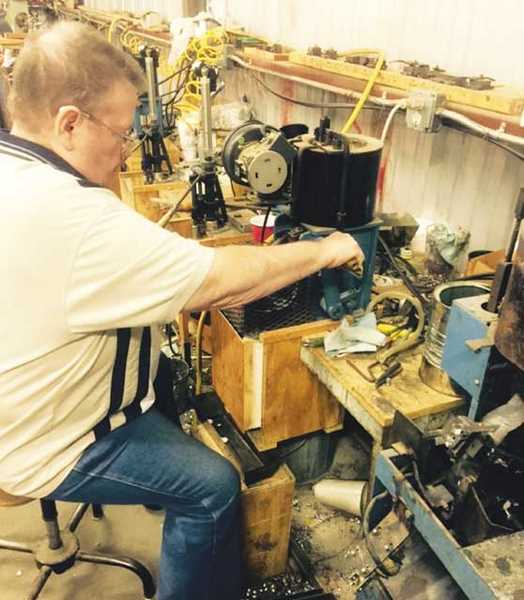 s
Several hundred custom bullets were hand cast and sized for my tests.

The three on the left are my 405-grain .458 bullets. Three 405s on the right are from Tin Starr. They are hollowbase bullets cast from pure lead.

As the test progressed, it became obvious that the Tin Starr pure lead bullets were the way to go. My 405, which does well in my Quackenbush rifle, could not stand up to the Tin Starr 405 hollowbase.

Using the bullet tuner
When I picked up the rifle from AirForce for my test in October, I was given a lesson in how the bullet tuner works. The engineer set up the rifle to work best with round balls, but he showed me the setting for heavier bullets. I was also shown how to uncock the rifle, which is surprisingly easy. You just open the cocking lever all the way, then return it about 3/4-inch so the safety can be taken off and pull the trigger. There’s not so much as a pop of air! The striker returns home, and the gun is uncocked.

Once I got to the range, I adjusted the bullet tuner for the 405-grain bullet first. I thought it would be the most accurate because it is in my Quackenbush. And, now, I am going to condense 3 or 4 trips to the range into a single table for you. But before I do, let me tell you about the big surprise I had when chronographing the bullets.

For some reason, I decided to chronograph the 215-grain semi-wadcutter first, so I filled the reservoir to 3,000 psi and fired through the chronograph. I got the following velocities.

After that, the velocities dropped off rapidly, but there are 6 powerful shots on a single charge of air! In later testing, I got slightly different numbers than these, but the 215-grain bullet averaged 880 f.p.s. (for the first 2 shots), for an astounding muzzle energy of nearly 370 foot-pounds.

Up to this point, I’d been shooting the Texan with just 2 shots per fill — the same as any other big bore in this power range. I really didn’t understand how the Texan performs until I shot this string. It showed me that, at least with these lighter bullets, the effective number of shots is really 6. What a difference that makes, because this bullet is perfect for whitetail deer.

However, when I tested the rifle for its maximum power, I used the best 2 shots per fill. That way, I’m testing it against all other big bores that get tested the same way. And I did confirm that, with the heavier bullets, 2 shots are all the useful full-power shots you get on a fill.

Maximum power
The following table was developed by tuning the rifle for each bullet weight. Only the first 2 shots froim each charge were used to make this table.

There’s much more to tell, and we’ll get to it in the next report. Until then, stay tuned!