Update on Edith
Edith was transferred back to the ICU because her oxygen level had dropped low. Her doctor ordered X-rays and a CAT scan to try to find out what is happening. The Guillain Barre Syndrome has been fully treated now, but here is the deal. The myelin sheaths on her nerves has been destroyed and hasn’t regenerated yet. With GBS it will do so, but it takes time. Imagine a complex electronic device that’s submerged in water all the time. Then the insulation get’s stripped off the wires. That’s what has happened to Edith.

They found large blood clots in her veins in the lungs, so she was fitted with a mask to force pure O2 into her lungs. They are worried that the clots may grow and obstruct her blood flow, so they put a clot filter in her inferior vena cava. And they are giving her blood thinners through the IV to keep the clots from growing. The next 48 hours are very critical to her.

Her brother is coming up from Houston to visit her this weekend, and of course I will see her every day. I will keep you informed.

I was going to publish a different report today, but Wednesday’s blog seemed to resonate with a lot of you. Something Duskwight said hit home the hardest for me. A scoped rifle doesn’t make you a sniper. Boy, is that profound! Let’s explore that topic this weekend.

“My son is an excellent baseball pitcher…

… and I think that makes him a good candidate to compete in air pistol at the Olympics.” Yes, someone actually once said that to Edith. It wasn’t that direct, of course, but it was that absurd. It’s similar to, “My four-year-old daughter listens to classical music all the time and I’m thinking of sending her to Juilliard to become a concert pianist.”

People love their kids and grandkids, but actual world-class talent isn’t that common. Yes, extreme application of study and practice can work wonders, but real talent is invaluable. Besides that — whoever said that man’s son wants to be an Olympic air pistol competitor? Maybe he wants to be a major-league baseball pitcher, instead. To which he might answer, “Oh, he’s too short for that. He’ll be good, but he’ll never make the majors. His arms are too short”

“I need a new airgun…

… because my field target/10 meter match score hasn’t improved in the past year.” And guess what, folks? It isn’t going to improve until you lose 30 lbs., stop drinking caffenated coffee, start walking/running/swimming 7 days a week and generally take better care of yourself. If you compete in air pistol there are also upper body exercises you need to start and stick with.

“What? I said I want to compete in field target — not run a marathon!”

Take a look at the winners of field target matches — not the local matches, but those who win the national and world matches. Do they look like they are out of shape? This is the reason shooters are also called athletes. Not that they can run 100 meters in 10 seconds, but they do take care of themselves –realizing that their bodies are an important part of the shooting equation.

Just as a new car will not make you a better driver, so a new airgun will not make you a better shooter. The exception to this is the guy who has been shooting his father’s Diana 35 in local 10-meter matches for the past 20 years and suddenly he comes into a Crosman Challenger PCP. Yes, in his case, the much better equipment will add points to the score. And the 10-meter pistol competitor who upgrades from a Daisy Avanti 747 to an FWB P44 will gain some points, as well. But those gains will stop unless the shooter practices more with the new equipment.

I have seen shooters in the field target game buy one rifle after another — searching desperately for the one that made them as good a shooter as the person shown in the ads for the same gun. I’m talking about rifles that cost $2,000 to 4,000. I believe our reader, Bulldawg, is currently engaged in an experiment to “educate” some folks who are of that opinion. I refer to his work to get his Benjamin Marauder to shoot as accurately as some much more expensive European PCPs.

I have seen the same thing with scopes. In fact, I once saw a scope ring set that cost $500 (in the 1990s, no less!) that was purchased to improve the shooter’s score.

The fact is — equipment doesn’t win. People win. That is not to ignore nor downplay genius, when it is encountered. If there is a master violinist, someone gets him an instrument worthy of his talent. But for the rest of us fiddle players, almost any old thing with strings will do. The neat thing about airguns is that for only about $3,000 a person can own a target rifle capable of winning the Olympics. And if you’re on a budget, $600 will get you an FWB 300S that is almost as good and nearly as accurate. You can’t do that in most other sports, and you certainly can’t do it with violins! To paraphrase reader Duskwight, owning a Stradivarius doesn’t make you Yahudi Menuhin.

We treasure vintage airguns because of the craftsmanship that went into their construction. And (Bulldawg and others, please forgive me) we treasure vintage Detroit Iron for the same reasons. But, when was the last time you had to set the points on your wife’s Toyota minivan? Never, right? Adjusting engine valves is becoming a lost art, where I used to carry a feeler gauge, wrench and screwdriver in the glovebox of my VW Beetle. I could tell you the timing in my sleep, and I had a timing light hanging in my garage like the rest of you dinosaurs. I haven’t timed an engine in the last 20 years — because I haven’t had to! My car engines just run as long as I pus gas in the tank and change the oil.

Before you explode, I acknowledge you gearheads who still live in that world. That is your fascination and I appreciate it. I also love the world of vintage airguns, so in a sense, we are connected in that way. You have read about me oiling the piston seal in my vintage Weihrauch HW35. But I haven’t oiled the piston in my Beeman R1 in the last 10,000 shots! I haven’t had to, because the use of synthetic seals and high-tech lubricants makes it unimportant. They just last and keep on doing their thing.

The new spring guns have good power without the horrible cocking effort they needed just 15 years ago. The new gas springs are actually easy to cock and get reasonable power. Manufacturers are using buttoned pistons (pistons with bearings around their sides to stop vibration), better mainsprings, better triggers and better barrels than we were seeing just 20 years ago. Yes there is still a lot of room for improvement, but today’s makers know that a Rekord trigger is the standard and they are taking their corporate heads out of the sand. In short, the technology is improving.

I’m sure you have heard the one about the tourist in New York who asked the local how to get to Carnegie Hall and the answer was , “Practice, man. Practice.” Funny, but also true.

When I competed in 10-meter pistol I tried to practice an hour each day. I thought I was really going all out, until I read that most Olympic champions dry-fire for 4 hours a day and shoot a full match (60 shots for a man) on top of that. And that is over and above the other 4 hours they spend on physical conditioning. What I had been doing was the airgun equivalent of practicing my piano for 45 minutes while I watched the clock!

I was writing The Airgun Letter at the time and thought I would see if this dry-fire thing really worked. So I upped my practice time to 2 hours of dry-fire and then shot a full match every day, 5 days a week. The first thing I noticed is that I really blew through those expensive target pellets fast! A tin was gone in a little more than a week. I had been buying pellets one tin at a time, but I upped it to 10 tins to cover the use.

The next thing I noticed was I could see the front sight much more clearly than ever before and because my pistol did not recoil, I knew where every pellet went. I started scoring myself after each shot from the image of the front sight when the shot broke. My scores that I was calling were uncannily correct, too. I could call a 9 or an 8 and I knew when I shot a 10 every time. 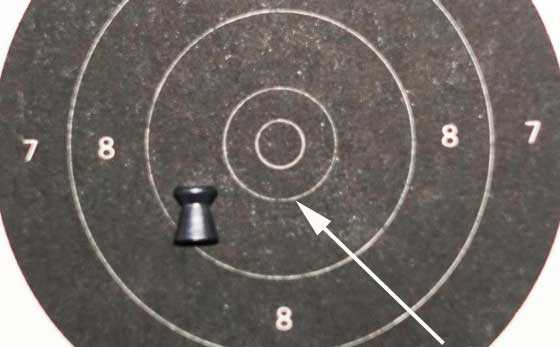 The inner circle is a perfect 10 that’s used for breaking ties. The next circle (arrow) is the actual 10-ring. The circle to the right of the 8 is the 9-ring, and the space between that circle and the smaller circle where the pellet rests is the scoring zone for a 9. It is unmarked to keep the target from becoming too cluttered.

The smallest ring in the center of the target is a perfect 10. On other targets it would be called the X-ring and would be used to break ties. The larger ring around it is the actual 10-ring used for scoring a match. After the match finishes, the top shooters fire 10 more shots that score fractionally. For only this final 10 shots the smallest inner circle is rated a 10.9 (if your pellet is perfectly inside) and a pellet that just breaks through the second scoring ring out scores a 10.1. This is how they differentiate shooters who never miss the 10-ring.

I was telling you that I increased my practice time with the pistol and in the very next regional match I added 23 points to my score! I advanced in the NRA national standings. That proved to me that practice and not equipment is what wins matches.

All this time I was shooting a $400 Czech target pistol called the Chameleon that is not even close to the quality level of a top 10-meter pistol, yet it is capable of shooting a near-perfect score. As I continued the practice I started to see the next scoring plateau, which would advance me another 15 points, taking me to the national champion level. I actually shot that well in practice, but my match scores were always 10–12 points less, which is pretty normal.

It was at this point in my competitive career that I started to feel the real need for a better air pistol. But certain things happened that caused me to stop competing, so I never rose to that level. I saw it, but never achieved it. But the additional practice was definitely what made the difference — expecially the dry-firing.

Today’s lesson is simple. Buy that better airgun if you want it, but don’t do it thinking that it will make you shoot better. Only practice can do that. Of course when you do practice, do so with the best pellets you can find and learn how your gun wants to be treated.