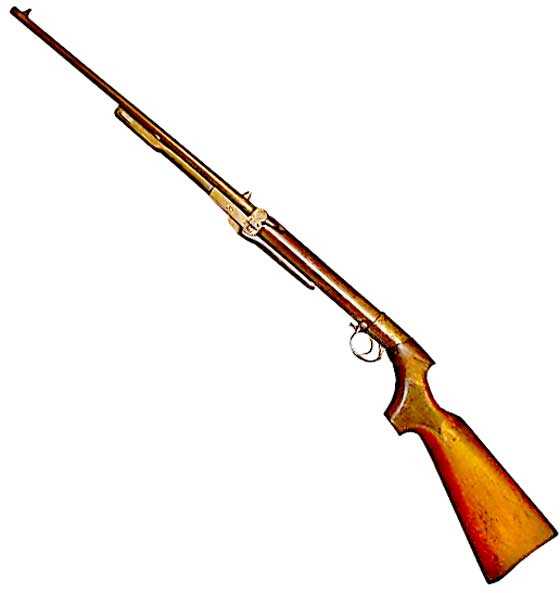 Today I’m looking at a category of airgun that was produced from the time right after World War I up to the beginning of World War II — let’s call it 1920 to 1940. For people in my age group, this was the time just before we were born, so it doesn’t seem that far removed. But for the majority of airgunners, this is crowding the antique market.

One thing that can be said about most of the airguns made during this period is they resemble firearms in their construction. And I don’t mean the firearms we know today. I’s talking about vintage firearms that are themselves revered objects among collectors.

These airguns were made from steel that was finely polished and blued. They are heavy and rugged and were obviously made for shooters rather than children. They had grip panels of walnut, though there were some with Bakelite panels, as well — just like Colt had been putting on their revolvers since the late 19th century. The rifles were stocked with walnut that was sometimes figured quite nicely. Gun makers didn’t think about things like that because the wood they used was all older growth lumber that often came that way.

Airguns of this era were either powered by spring-pistons or they were pneumatic. Only the Crosman Corporation was experimenting with CO2 before the war, but that would change dramatically immediately following World War II.

The pneumatics at the time were mostly in the lower cost tier with a couple notable exceptions. Vincent made a 20-gauge air shotgun and Paul made a .410 air shotgun. Both were pneumatics, but the rest of the pneumatic airguns were made by Crosman and Benjamin and are in the lower price ranges. They are made very well by today’s standards, but they certainly don’t qualify to be in today’s report.

By today’s standards, these guns were not powerful. The designers went more for flawless operation and reliability than to try to extract the last possible foot per second. These were days before the chronograph was widely available. People concentrated on hitting the target, rather than staring at a screen to see whether or not they should like their gun. And the materials they used did not lend themselves to high velocity. Leather seals can be very long-lasting, but you’ll not find them in guns with extreme power.

I remember when I owned a BSA Standard underlever that was made sometime around 1910-1914. That’s a little earlier than the era we are looking at today, but BSA continued producing the same gun for the next 20 years or so. When I first got the gun it would not shoot a pellet out the barrel, so I took it apart to see if it could be fixed. The design was very simple and straightforward and gave me no problem getting things apart.

The BSA Standard model D was a very early spring piston air rifle. BSA revised it many times and made it up to the start of World War II.

The mainspring was under some tension, but not as much as you would find today. I didn’t have to use a mainspring compressor — just unscrew the breech cap after two screws were removed.

The inside of the powerplant was bone-dry. The parts hadn’t been lubricated in decades. The piston was galled (had shiny spots from rubbing against other metal parts without lubrication) in places.

I found the leather piston seal was destroyed, so I made one from an old leather belt. I oiled it heavily before installing the piston back in the rifle. I also greased the mainspring and other parts that touched each other (spring guide and piston rod) before assembly. After that minimal treatment the rifle fired fine, shooting medium-weight .22 caliber pellets in the 525 f.p.s. range.

Reader RidgeRunner bought a similar BSA underlever at an airgun show a few years ago. His rifle was also not working and needed repairs when he got it. I’ll let him tell you what he did in the comments section, but I’m sure he was impressed by how simple and straightforward these guns are.

These prewar airguns are deceptive, in that people are blown away when they first encounter one. Firearms dealers often put outrageous prices on them when they have one to sell, saying things like, “I have never seen anything like this. It must be super-rare.”

No, most of them aren’t. They just don’t travel in the same circles as firearms dealers. You find the same dealers trying to sell a Benjamin model 130 BB pistol that’s been taken down to brass and shined up like a trumpet for $250. They turn a $90 pistol into a $50 pistol by removing the finish with Brasso and they think it’s rare. Imagine their reaction to a Webley Senior that looks as nice as a Colt Official Police revolver! They have never seen anything like it so they naturally price it like the Colt. 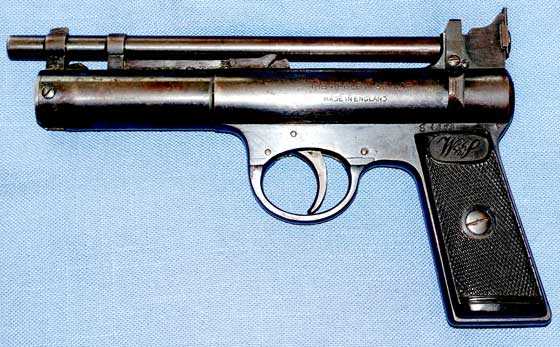 Webley Senior straight grip from the early 1930s is as well-made as any firearm.

What are these guns really worth? This is where it comes in handy to own a Blue Book of Airguns, because that will usually give you some idea of what a certain airgun is worth. Let’s look at that Webley pistol. The Blue Book identifies it as a Webley straight grip Senior, Second Pattern. This is the rarer of the straight grip Seniors and they give a range of values from $115 to $575. Using NRA guidelines (which you can because the air pistol is made like a firearm) I would say the example shown here is in 40 percent condition. That would give it a value of $200, according to the Blue Book.

I bought the pistol at a gun show in 1977 for $75, which was all the money it was worth at the time. I would not sell it for $200 today, but that’s because I like it — not because it’s worth more. If I were selling, I think $200 is about right. But notice how a little upward change in condition affects the value. If the gun was in 60 percent condition it would be worth $285. So, there is a great temptation for the seller to inflate the condition.

But it might not be worth that to everybody. The prices in the Blue Book are just there to guide you — they aren’t set in concrete. If a person wants something badly enough they will pay whatever they have to, to get it. Or they may never buy what they want because they refuse to spend money that way. Think of those Blue Book prices as a way to start a conversation.

That’s why it makes no sense to argue about the condition of the gun if you see it in person. The seller might say it is in excellent condition and you may believe it’s just very good. I just bought a Colt revolver that was mis-described like this. The seller said it was “minty” which is a slang term that means very nice. But the bluing is worn off the backstrap! Now, it can’t be both minty and have a worn backstrap. So, I mentally adjusted the condition to NRA Very Good, and even in that condition I thought it was it was undervalued. It works the same way for prewar airguns.

Let’s say you are looking at a BSA Standard model D rifle in excellent condition. It would be worth $500+ if the finish were original, but this one has been reblued. The guy did a wonderful job, so you still have a $250 airgun. But he also drilled and tapped the spring tube for Weaver bases, so it could be scoped. There goes the rest of the value. It is now worth whatever someone will pay for it. No collector will touch it. They will buy the rusty BSA Standard model D next to it that hasn’t been touched, and pay $275 for a gun that doesn’t look half as nice as the scoped gun.

Will anyone buy the scoped gun? Sure! If you wait long enough someone will buy it. I can’t tell you what they will pay for it — that’s between you and them. All I can tell you is if you have a BSA Standard model D that’s in excellent original condition and put a $500 pricetag on it, you won’t have it long. Prewar airguns in excellent original condition sell very well.

Maybe you were not aware of the status of prewar airguns. If you saw one you would know it is special. Everyone can spot that. Why it’s special, though, might slip past you. You might think it was a special brand or type of airgun, rather than simply one that was made in an era when all airguns looked similar. And, there is one more thing I must tell you.

The last comment I will make is that most of the good prewar airguns were made in Europe. When you start examining and researching them that fact jumps out. The Europeans had a high regard for airguns before WW II and they tended to build them just like they built their firearms. With a few exceptions American makers were making their airguns cheaper.

So, if you want to find exemplary airguns that are the rivals of firearms, look at European guns made before WW II.