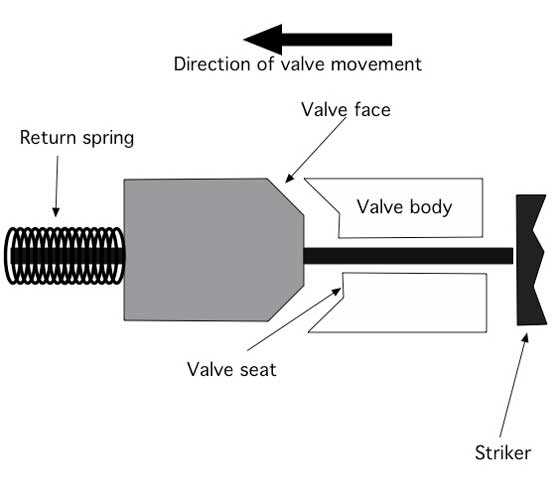 My new book, BB Guns Remembered, is a collection of short stories that deal with airguns. The stories aren’t really about the guns — they are about the people who owned them. It’s a nostalgic look back at a simpler time. The last chapter is a fictional account of the invention of an air rifle that takes place in the early 1700s. In The Wind gun of Prostl, I take the reader through the thought processes that might have transpired when the outside lock airgun was first invented.

Nobody knows when or where that took place, nor do we know who the inventor was. But I had the unique opportunity to watch airgunsmith Gary Barnes examine a lock from about the year 1730 and then struggle — first to understand how it worked and then to determine how it might have been made in the early 1700s.

Today I want to show you around the outside lock as Gary and I saw it years ago. Most of you are familiar with a knock-open air valve. A weight caller a striker hits a valve stem and forces it to move, opening the valve. That allows compressed air to flow out of the reservoir the valve is sealing. Here is a graphic of a simple knock-open valve.

Knock-open valves work well in pneumatic guns. They rely on a number of things to do their jobs, and those things are: the air pressure inside the reservoir, the size of the valve seat, the size of the air passage through the valve, the strength of the valve return spring and the force with which the striker knocks the valve open. All these things taken together determine the amount of time the valve remains open for air to escape. That time is called dwell time.

As the air pressure inside the reservoir drops, the pressure that remains puts less force against the valve as it closes. Therefore the valve stays open longer. But the air pressure is lower, so less air flows out. But lengthening the amount of time the valve remains open offsets the slower air movement, with the result that the projectile gets about the same amount of push every time. You either have high pressure air available for a short time or lower pressure air for a longer time. When a valve works this way we say it is a self-regulating valve.

The self-regulating valve operates within a window of air pressure inside the reservoir. If the pressure goes too high, the valve doesn’t open all the way and the velocity is lower — if the gun even works at all. Then, when the air pressure drops to a certain level, the valve starts to operate as it should. And when the air pressure drops below a certain point, there isn’t enough air remaining to sustain velocity, because the pellet leaves the barrel before any additional push can be delivered. So there is an upper and lower limit to the reservoir pressure within which the knock-open valve will work well.

This window can be adjusted by changing the size of the valve seat, the air pressure inside the reservoir, the size of the air passage through the valve, the tension of the valve return spring and the force of the striker. But, as the maximum fill pressure in the reservoir goes lower, a limit is eventually reached where only a couple shots are possible, and those even have widely different velocities. At low air pressure the knock-open valve is not the optimum design. Enter the timed valve.

A timed valve operates differently than a knock-open valve. It holds the valve open for a specific length of time each time it operates. A differing amount of air flows through a timed valve, depending on the air pressure inside the reservoir. There is some self-regulation, because the air does resist the valve from opening and also helps close it again, but compared to the knock-open valve the timed valve isn’t as consistent.

However, the timed valve does work well at lower air pressures. It was an ideal valve for the airguns of the 17th and 18th centuries thqt had to operate at 500 to 800 psi. The valve we will look at in this report is an early form of timed valve.

This valve has several names and none of them are official. Some people call it a Liege lock because many of them were made in that city. I call it an outside lock, which describes what it is. This lock has most of its operating parts on the outside of the lockplate, because several of them are too large to fit inside.

The one part that absolutely has to be on the outside is the mainspring. To generate enough power to operate the lock there is no room inside the action for this spring. Because it is outside, it makes good sense to put all the parts it powers outside, as well. That way no complex linkages have to be made to pass through the lockplate. 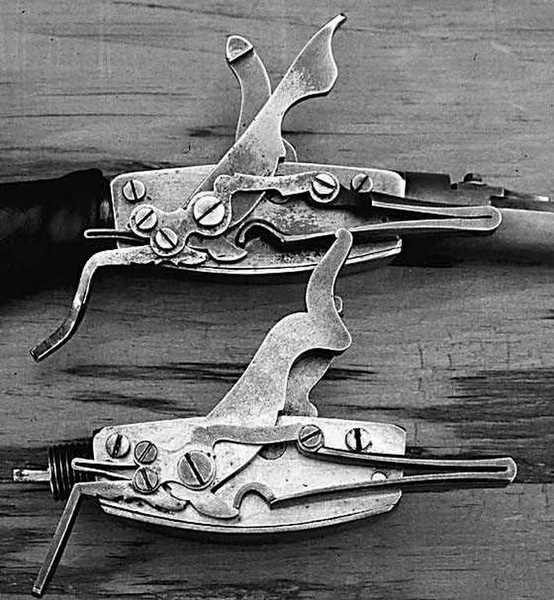 Here is a thousand-word picture. At the bottom is an original outside lock from about 1730. On top is the lock made by Gary Barnes, after he studied the original to learn its secrets. Both locks have a mainspring that’s too large to fit inside the action. 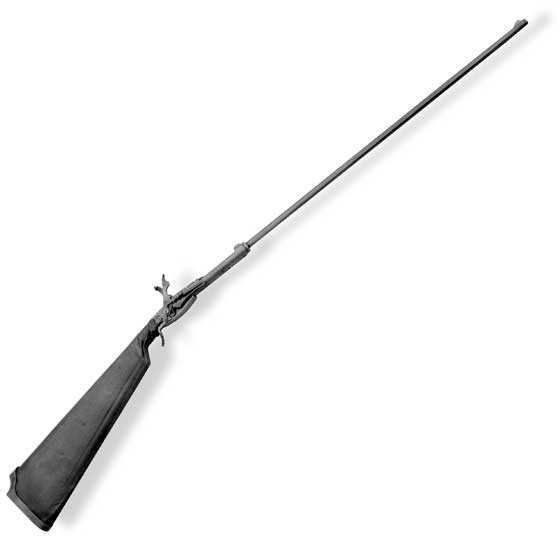 Barnes’ outside lock rifle is a .25-caliber single shot.

The outside lock works by pushing the valve open, rather than hitting it. The hammer moves through its arc and for part of that arc a cam located on its back side engages a part I call the valve lever. The valve lever also has a cam, so the two parts move together for a time until their respective arcs cause their cams to disengage. The bottom of the valve lever pushes a connecting rod that opens the valve.

Is that confusing? How about a drawing that illustrates it? 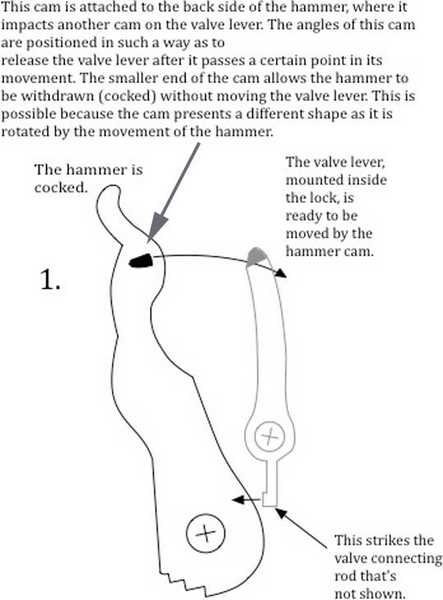 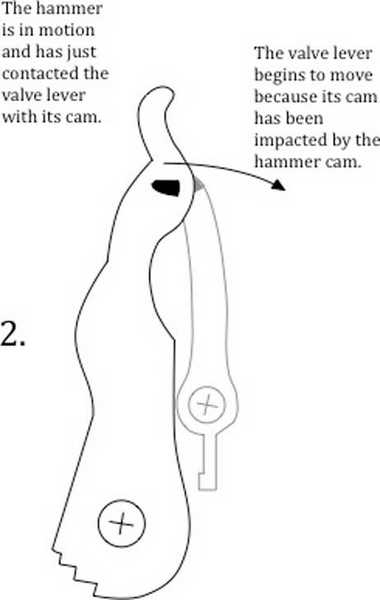 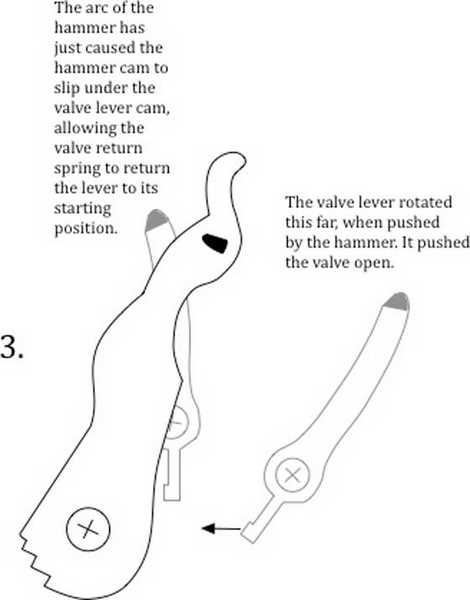 These drawings are very busy and may have to be enlarged to see all of the detail, but this is how the outside lock works. Don’t concentrate on the top of the hammer. The real action takes place at the bottom of the valve lever, because it pushes the valve open.

When the hammer is cocked the two cams do engage on their back sides, but the hammer then pulls the valve lever away from the connecting rod, so there is no loss of air.

When you look at how this lock works you realize it took a genius to figure out all the complex relationships. Remember, this was all done at a time when air was just an invisible substance. People didn’t really know what it was, yet these guys learned how to harness it most effectively. In the next report I will tell you just how successful they were.

But the wonder of the outside lock doesn’t stop with the design. The craftsmanship that was employed to make it is at a level we seldom see today. The bottom cover of the lock, for example, is made from two iron or steel plates and is curved to accommodate the bend in the lock. The plates are joined by a complex dovetail that extends 90 degrees into each plate. In other words, there are dovetails cut into metal that’s bent 90 degrees, then the entire assembly is brazed together with joints almost too tight to appear in photographs. They can be seen with a jeweler’s loupe or in an enlargement. Gary Barnes replicated the work, but with joints large enough to be visible. 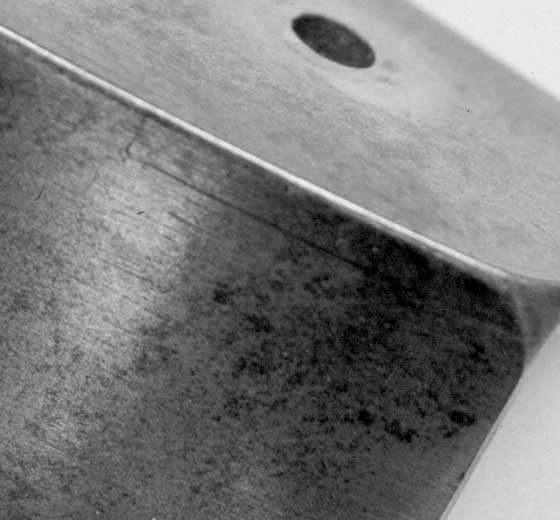 Here is a 5X enlargement of one dovetail joint on the original 1730 lock cover. I had to Photoshop this image a lot to show the joint line! This work was done by hand with a file, and it extends along the entire joint.

Gary Barnes’ lock cover joints are more visible because the braze is fresher. They go all the way along the plate at the bend. You just can’t see the joints on the right because they are too small. Notice the 90-degree bend in the dovetails.

There is more craftsmanship to see in the next report. Then I will tell you about the performance of this unusual piece that I was fortunate enough to own for a while. If you are interested in my book, BB Guns Remembered, Pyramyd Air should have it available soon.

50 thoughts on “The magic of the outside lock: Part 1”