by Tom Gaylord Writing as B.B. Pelletier This report covers:

My shooting buddy, Otho, called me yesterday and said he was in a pawnshop where there was a pristine Wamo Powermaster in the box with all the paperwork. That condition is rare for a 1960s-vintage painted gun like the Powermaster. I told him it was a $300 gun at the minimum, and asked him to take a closer look for me. The shop had $275 on it, which means he probably could have walked out with it for $250 and they pay the sales tax. 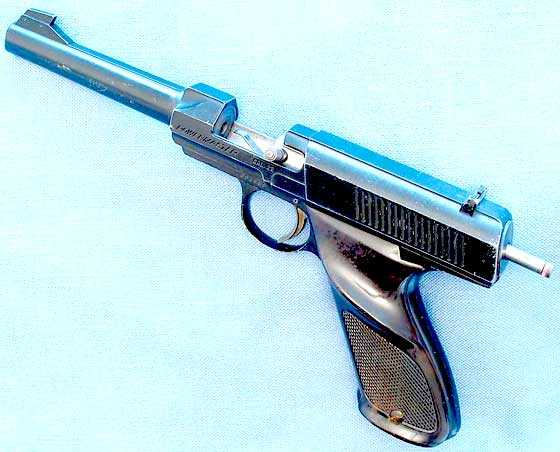 Wamo Powermaster is one of three different .22 rimfire firearms made by the same folks who made the Hula Hoop and other iconic toys of the 1960s.

When the dealer pulled it out of the case and handed it to him he told me one of the plastic grip panels appeared to have been melted or possibly sanded down. Then he asked me, “Did this gun have a thumbrest?” Yes, it did. There was a thumbrest on the left grip panel when the gun was new. Bubba had removed the one on this gun by sanding and then carefully polishing the panel until it was flat like the one on the other side. That removed all the collector value, and with a Powermaster, collector value is all there is, because it sure isn’t a gun to shoot! Don’t think you can find a set of grips, either. They are plastic and fewer sets have survived than the guns they were on. This is a deal you have to walk away from. That made me wonder about the other deals I have walked away from, as well as the ones I should have walked on but didn’t.

He buffed it out!

I can’t begin to tell you the number of firearms and airguns I’ve seen that someone has buffed to a high sheen and re-blued. Let’s focus on just one. I own a .44 Special Smith & Wesson N-frame revolver that has a round butt. For several years people told me that S&W never made an N-frame with a round butt. My gun had to have been modified, and was therefore just a shooter. Then I met a man who had spent years with Smith and Wesson. So I asked him about it. He didn’t know, but he still had contacts inside the company, so he called. He was told that indeed S&W did make a round butt N-frame. It was a very early non-numbered gun with a classic 5-screw frame. Even the Blue Book of Gun Values fails to recognize this variation, but it was a real model that S&W produced. 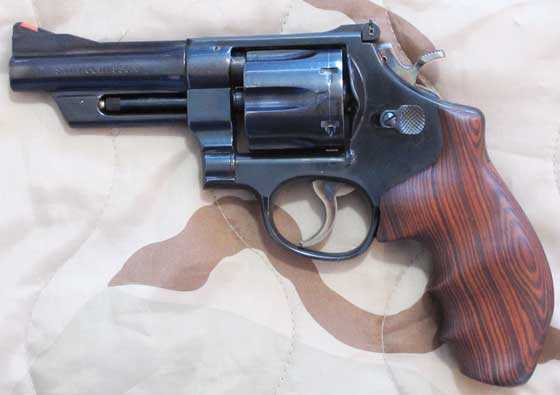 Smith & Wesson N-frame .44 Special 5-screw with round butt does exist. 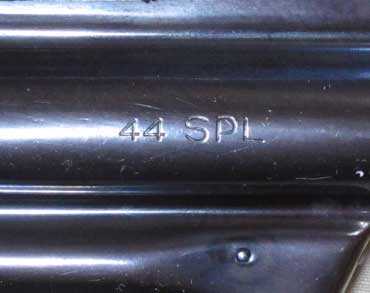 Bubba’s buffing wheel turned this one into a shooter, only.

Mine is a very early 5-screw frame gun that has all the characteristics of the gun S&W described. It would be worth a lot if someone hadn’t buffed it and re-blued it years ago. “Yeah,” Bubba says, “I had to do that. There was some holster wear at the muzzle and also on the cylinder.” Bubba is the same guy who will pay $65,000 for a 4-wheel-drive pickup, add another $30,000 worth of options and then never drive it off pavement. He lives in Phoenix, where the snowfall gets measured by decades rather than years. As long as his stuff looks good, he’s happy. That refinishing took a $2,500-3,000 gun and turned it into a sparkling shooter worth maybe $1,200. Fortunately I am into this gun at the shooter level, so I wasn’t hurt. I knew it had been refinished when I traded for it, so I got a nice .44 Special Smith with a 4-inch barrel — something that will always command a certain value.

One firearm is faked more than any other — the Remington New Army model .44 caliber cap and ball revolver. An airgunner I know who is also a firearm collector shelled out a lot of money for one many years ago. He was so proud to show his new acquisition to me. When he did he said he thought it could be a fake, but it looked so good he wasn’t really certain. Well, I was certain. The lettering on the top barrel flat was all wrong! Remington used very small letters and this one had letters that were tall and very thin. I have owned an original Remington revolver and knew what that their lettering looked like! This one was all wrong, and I told him so. Then came my chance to be deceived. Several years later I acquired a Remington New Army with no lettering at all. But this one was much more worn, so I figured the lettering could have worn off. Except the caliber .44 was stamped deep into the side of the barrel and was still very visible. I did a deal for it that made my friend’s deal look good, in comparison! When I got it home and disassembled it, I found the Italian marks that were put there in the early 1960s, when replica guns were still a novelty. I could write a book about this — except someone already has! Author Rick Sapp published The Gun Digest Book of Firearm Fakes and Reproductions in 2008. Guess which three revolvers are on the cover? That’s right — Remingtons! 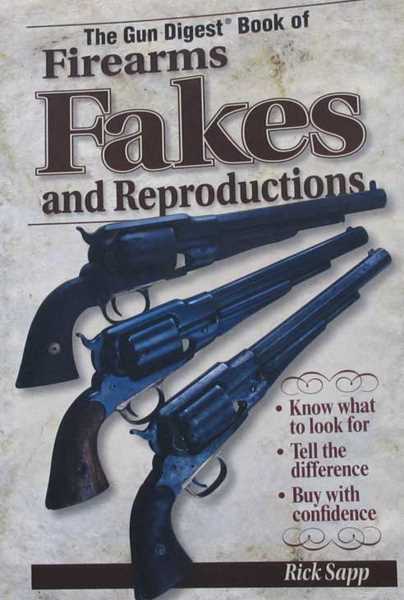 When they put Remington revolvers on the cover of the book about fakes, you know they are out there!

A few years after he acquired the fake Remington, my friend traded it to me in a complex deal for another airgun. I figured he didn’t want it around to remind him of his folly. I have very little in that gun, and I wanted it to accompany my personal shame. The two make a nice pair. I take these two revolvers to all the gun shows where I display them with a sign that explains they are counterfeits.

Made to Deceive These two revolvers have been artificially aged to appear as vintage 1858 Remington New Model Army handguns. Both were passed off as original! The one that has no finish has no manufacturer’s markings on the outside, so partial disassembly is required to establish the maker. The darker gun has a very faint Remington address on the top flat of the barrel. If they were real, these guns would each be worth $600-800 in the condition seen here. 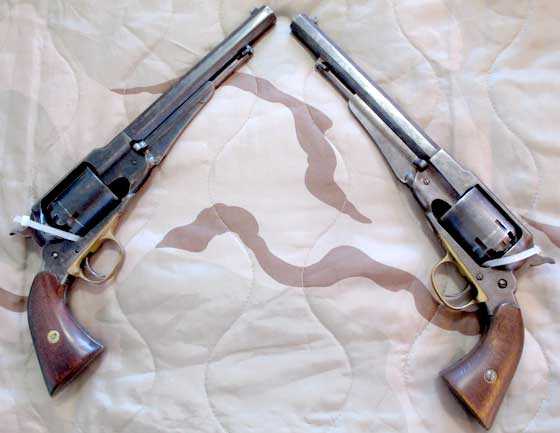 Both fakes are Italian copies from the early 1960s. Cable ties are required for the gun shows.

My thinking was this display might educate other gun owners so they could avoid my folly — as well as that of my friend. Many people do read my sign and talk to me about the guns. But at every show, someone wants to buy them. The first time it happened I shrugged it off, thinking a lunatic had escaped his confinement. But when he kept returning and pestering me, I put a price of $1,200 on the pair. That’s about what I have in them. I figured just because he was crazy didn’t mean he was also broke. Well, upon hearing that number his meds kicked in and he returned to the land of the lucid. Nothing like a high price to bring people back to reality!

Airgun values are more difficult, because they are much more vague than firearms. For example, a 1924 Crosman pneumatic that later became the model 101 is rare enough to command a thousand dollars, yet they sell commonly for $250 today. People refinish them all the time and it doesn’t hurt the value because they are so undervalued to begin with. And the much more common model 101 almost has to be refinished to bring more than $100. A Hakim military trainer is far rarer than a 42 byf “Black Widow” Luger, yet the Luger brings over $2,000 in very good condition and a fine one will approach $6000. I have never seen a Hakim trainer that was in very good original condition. People refinish them all the time. If the job is done well it actually adds to the rather depressed value. You can get a very nice one that absolutely has been refinished for $450.

Then we have the painted guns like the Crosman Marks I and II Target pistols. Okay, maybe they aren’t that valuable today, but let time pass and they will be. Like the Wamo Powermaster we began with (and which, incidentally, the Mark pistols resemble more than a little), as time passes their value will go up. Wamo made 15,000 Powermasters. Crosman probably made well over 100,000 Mark I pistols. But the number of original Mark Is that are in excellent condition and still in their boxes today is probably very small. People refinish the Mark I all the time. So a true original will be very hard to find. That still has zero impact on the value of these guns today. People still want them as shooters — not as collectibles. Will that be true in another 10 years? Maybe not. Another 20? Almost certainly not. If a person wanted to buy a collectible that is grossly undervalued, an excellent original Crosman Mark I or Mark II in the box with the original paperwork would be the thing to get. Pay around $200 for it and set it aside for 10 years and see what happens.

They will go up

When I was a kid you could buy first generation Daisy Red Ryders for $5-10 all day long. Call that $50-100 in today’s money. Most of them were beat up and not worth the investment, but if you looked hard there were a few good ones to be bought. The refinishing craze hit the Red Ryder in the early 1990s. All of the originals were getting re-blued and their copper bands were being re-plated. They made beautiful exhibits — and they lost all value as collectibles. Sure, people paid a lot for them all buffed up, but today those $250 guns are not worth more than what they sold for 25 years ago. An original Red Ryder in excellent condition will now pull in upwards of $700.

You may not be a collector. What do you care about any of this? Well, you may not care about the buying end, but what about the owning end — those airguns in your care right now? Let’s say you acquire a Webley Mark II Service rifle in a trade. You’ve always wanted one and this one was in your price range because the finish is mostly gone. You need a tetanus shot just to hold it — it looks so bad. Should you break down and refinish your gun? I say go ahead. You probably can’t harm that gun any more than it already has been. But, if the same gun has 60 percent finish remaining and you just want it to sparkle, you might be stepping over the threshold by refinishing. You need to consider the gun’s future — not just with you but afterwards, too. I own a Springfield M1903A3 rifle that is in 99 percent condition. It would be a thousand-dollar rifle if someone hadn’t engraved their social security number on the receiver with an electric pen! As is, it’s worth $500 as a shooter. In 20 years the pristine one will be up to $2,000 and mine will be worth $600. That’s the sort of legacy you need to consider. 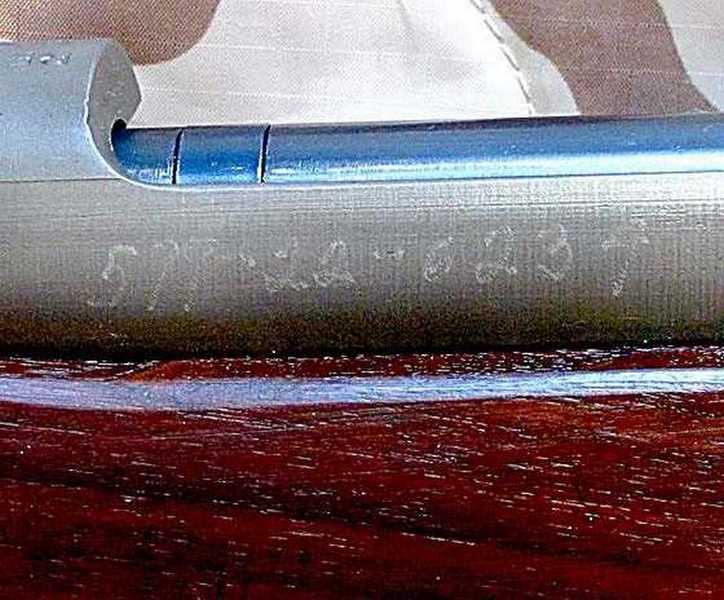 Ahh! Bubba and his electric pen! “I don’t care what happens to this rifle after I’m gone. Right now, it’s mine!”

Buy it to shoot if the price is right. But if it’s been messed with and you want a collectible — walk away!

46 thoughts on “Passing up a good deal”