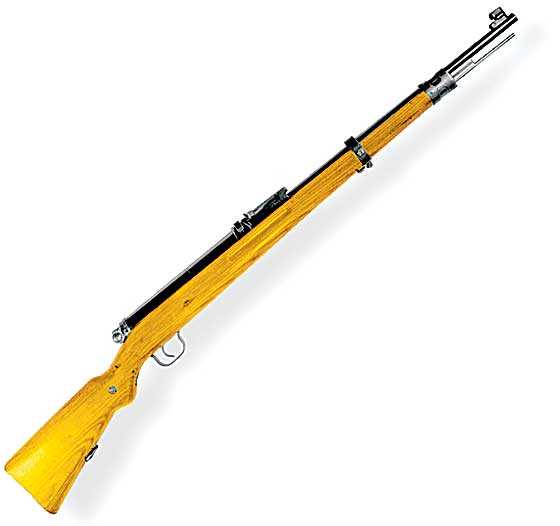 The Czech VZ 35 was a large rugged military trainer. This one is missing the upper handguard.

Airgun Academy Episode 36 is up

Before we begin today’s report I want to announce that Episode 36 — Safe BB traps is online and ready for viewing.

We haven’t talked about airgun trainers for a while. Today I want to look at one of the most realistic military trainers of all — the Czech VZ 35. This is a bolt action ball-shooting rifle — essentially a BB gun — that fires 4.4mm lead balls through a rifled barrel. It weighs as much as the 8mm CZ 24 Mauser firearm that it copies, which is 9+ lbs. And that’s without the bayonet! Yes, this military trainer accepts a bayonet — the same one that goes on the military rifle.

This airgun was made at the Brno arsenal in the 1930s. The model number gives away the date when they started making them. Production ended sometime before WW II.

Make no mistake — this is not a child’s BB gun! It is a full-blown military trainer for adult men, many of whom will find the bolt difficult to cock. Pulling back on the bolt handle compresses the mainspring, readying the rifle to fire. Instead of coming straight back, the bolt is attached to a lever at its root that is anchored deep inside the stock. Raising the bolt handle unlocks it for cocking, but instead of traveling backwards, it rocks back through an arc, pulling the mainspring into compression.

The force required to pull the bolt back is considerable, plus the bolt/cocking lever is anchored deep in the pistol grip that is located close to the shooter where it’s difficult to apply force. I can cock the rifle while it’s sitting on my shoulder, but just barely. I wouldn’t want to do it all day! 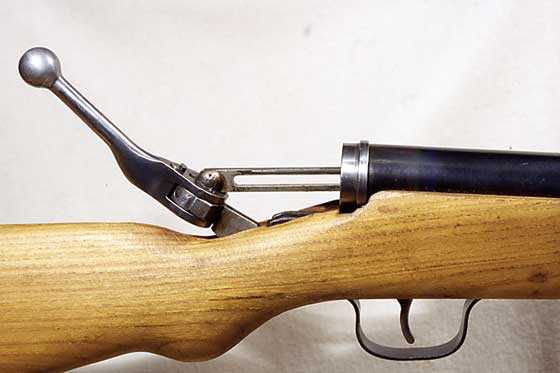 Lift the bolt handle then pull back and cock the mainspring like this.

I said the VZ 35 is a BB gun and it is. Inside this rugged rifle is a mechanism not that different from the one Daisy puts in the Red Ryder. Instead of a piston with a flat seal like a spring-powered pellet rifle would have, the VZ 35 has a plunger. A long air tube on the front of what might be called a piston pushes the ball out of the breech and starts it on its way down the barrel. That’s good for the first 50-75 f.p.s., or so. When the plunger seal closes on the end of the compression chamber it sends a blast of compressed air up the hollow air tube to the back of the ball. This blast then accelerates the ball to its final velocity.

Once cocked the rifle is very deliberate. It’s definitely not a plinker. The weight and length, the heavy trigger pull plus the military sights combine to make the shooting experience of this rifle very focused. To an extent that’s even greater than the Hakim trainer, this one keeps the shooter thinking about the task at hand.

This rifle shoots pretty hard for a BB gun. It pushes the 7.7-grain ball out the spout at around 425 f.p.s., which puts it into the class of a pellet rifle more than a BB gun. You get something back for that hard cocking effort. And keep your gun oiled, because it does have a leather piston seal.

The rear sight is calibrated for distances as close as 5 meters. You can actually give the Daisy Champion 499 a run for its money. Of course this one is rifled and the 499 isn’t. I could put 5 shots into a half-inch offhand at 5 meters with mine. 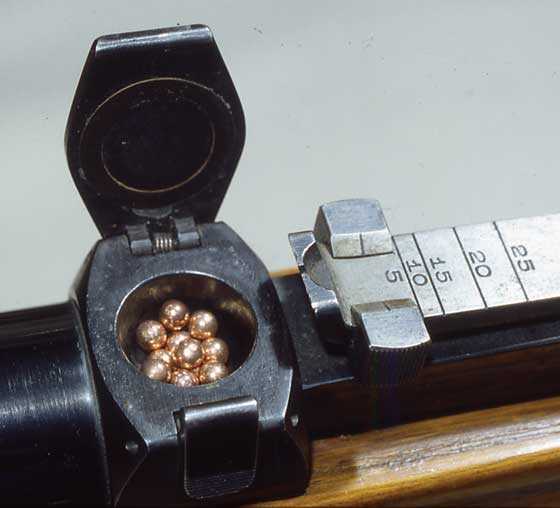 Lead balls are stored in this hopper on top of the spring tube. When the rifle is cocked, the air tube retracts to make room for one ball to fall into the breech.

The VZ 35 is a repeater that holds around 20 lead balls in a hopper on top of the spring tube. When the rifle is cocked, the air tube on the plunger retracts far enough that one ball can fall in front of it. The top of the hopper is spring-loaded and opens when the catch is depressed. It looks very retro and elegant.

A VZ 35 is finished as nicely as any premium firearm — much nicer than it had to be and far better than the Mauser rifle it copied. The stock and handguard (which my rifle is missing) is made from a hardwood that appears to be from the ash family. All metal parts are either highly polished and deeply blued or else left bright. This is an all wood and steel airguns that harkens from the pre war era. The same care that went into a Luger was put into building this air rifle.

As a consequence of the obvious quality, VZ 35s have always commanded high prices whenever they came on the market. You don’t need to be an airgunner to see what’s there. The one I owned was blued as well as a TX 200 Mark III.

I remember spotting a sporter on a table at the now-defunct Roanoke Airgun Expo years ago. I thought someone had cleverly sporterized a military trainer, but collector Larry Hannusch set me straight. Apparently the sporting version of the same gun was made and is found from time to time. I think I have seen two in all my time attending airgun shows, and they might have been the same rifle seen at two different times. In contrast, I’ve seen a dozen VZ 35s.

The difference between the sporter and the military rifle are the length of the gun overall (the sporter is shorter) and the upper handguard on the military version. And of course the sporter does not have a bayonet lug!

This rifle accepts the same bayonet as the firearm it’s patterned after.

The initial trigger pull of my VZ 35 was very heavy — in the 10-12lb. range that’s too heavy for me to measure accurately. I disassembled the mechanism (don’t try this unless you are very skilled — this gun is complex) to lube the mechanism and I put moly on the sear and trigger surfaces at the same time. That reduced the pull a little, but this is a simple trigger that won’t ever be light and crisp. I would say I probably got it down to the pull of an average Mauser battle rifle. That’s in the 7-9 lb. range.

This is a collector’s airgun — not a good shooter. It’s too difficult to cock, for one thing and the trigger is too heavy for another. But as an object of curiosity it is ideal. I owned the bayonet when I had the rifle and I think no collection is complete without one. If you want some thing no one else has or will even know about, consider getting a VZ 35! 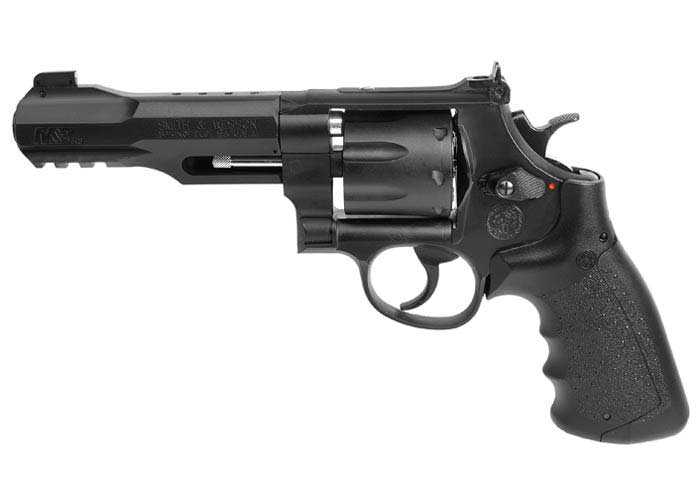