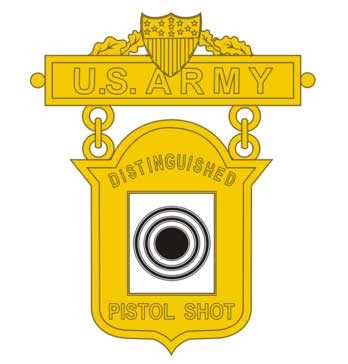 This is the continuing fictional saga and guest report of a man teaching a woman to shoot. Today I will be taking over. I’m going to show you how to hold a 1911 pistol one-handed for the best accuracy. This was requested by reader levans, but several of you own 1911s, so this should be of interest to many.

Learned from a champion

Readers who have been with us for years know this story, but for the benefit of the newer readers, here is how I learned this technique. I was running a pistol range for my cavalry squadron in the Army and the squadron commander, LTC Bonsall, arrived on range in his jeep. I had never seen a lieutenant colonel at a small arms range before. I’m sure they went, just never when I was running the range. The colonel introduced himself, because I hadn’t met him yet — he was that new. Then, he asked to qualify. Well, sure, he could qualify. It was his range, after all!

I directed him to a table upon which we had about 50 pistols waiting for the next shooters. You’re supposed to qualify with your own weapon, but I had several hundred men to cycle through and to keep the range moving we had 50 pistols that the entire squadron used. That way there weren’t a lot of malfunctions. After weeding out the bad magazines in the first few relays, we had the range running smoothly. It was also much easier to clean only 50 pistols instead of 400.

Colonel Bonsall selected a weapon and took his place on the line with another 24 shooters. The shooting commenced and that’s when I lost track of him until my chief NCO came up and discretely asked me if I had noticed the colonel’s target. We were shooting at man-sized silhouettes at 25 yards. Each man got a fresh target when his relay began and the course of fire was 50 shots at the silhouette.

We called it qualification but it was really more like annual refresher training. Most of the silhouettes looked as though they had been peppered by a shotgun firing huge balls. But the colonel’s target had a small hole right where the heart should be. He had fired about 30 rounds through a one-inch hole when I caught up with him, and the rest of his shots didn’t stray far from it.

The upshot of that day at the range was that our new commander wore the Army Distinguished Pistol Shot badge, a qualification badge so rare that not only had I never seen one, I had never even heard of it! And I was a gun buff serving in the Army! As of 2008, there were 1,709 Distinguished Pistol Shot badges awarded to Army personnel since its inception in 1903, making the badge rarer than the Army Medal of Honor that has been awarded over 2,000 times, though admittedly over a 40+ year longer span of time.

This Army Distinguished Pistol Shot Badge is so rare that I hadn’t heard of it before meeting LTC Bonsall.

That was the day when Elmer Keith’s last printed lie turned out to be true — you really CAN hit a man at 100 yards with a 1911 pistol. Repeatedly! But you have to know what you’re doing. Anyway, the colonel got my attention. Being a kindred gun buff, he taught me how to shoot the pistol. Now, I’ll tell you what I learned from him.

It’s all in the hold and the trigger action

How you hold the 1911 or the 1911A1 determines how tight it will shoot. Yes, the gun can be gunsmithed to shoot even tighter, but even a tired old clunker will surprise you if it’s held right.

Always grip the pistol the same way every time you hold it. Hold the palm of your shooting hand flat with the thumb extended and place the pistol into the web of your hand. The three fingers that aren’t the trigger finger should be wrapped around the grips, and the thumb comes in on the other side of the grip.

Now — and this is the key — squeeze the pistol straight back into the web of your hand with the middle finger, which is the longest of the three fingers wrapped around the grip, and also highest on the grip. The other two fingers apply absolutely no pressure to the gun. They’re just along for the ride. The thumb also puts no pressure on the gun, although I will tell you something else about it in a moment. Only that middle finger is squeezing straight back. Let me show you what that looks like with an illustration I drew for the Beeman P1 pistol that has the same grip as a 1911. 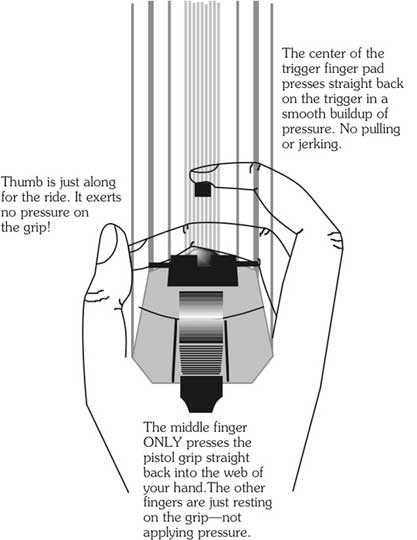 This graphic is copied directly from the January 1996 edition of “The Airgun Letter.” It illustrates the correct hold.

The thumb controls the recoil

That thumb can ride against the grip, but if you rest it atop the manual safety switch, it will cut the muzzle flip from recoil by half. Some worry that their thumbs will be hurt by the moving slide, but I have never seen that happen. When the pistol comes back in recoil, the thumb doesn’t allow it to rise as much as it wants to. This is a trick I learned from reading the late Jeff Cooper.

This is possible with a stock Colt pistol, but most 1911s you encounter today have special wider safeties that are made for this. Some are even ambidextrous, for lefties.

The final trick to Colonel Bonsall’s technique is locking the elbow. When you raise the pistol to take a shot — and you should only shoot one time before lowering the pistol to rest the arm — rotate the arm in the direction of the shooting hand. If you are right-handed, roll the pistol to the right. That moves the elbow under the arm and locks it in place. After the elbow is locked, slowly lower the pistol until the sights are aligned, then take the shot in 5 seconds or less.

Also, lean slightly back, bringing the shoulder above the leg. That turns your shoulder into a cantilever support, taking a lot of the pistol’s weight off your arm muscles and making your hold steadier.

Can this technique be used for other pistols, as well? Certainly. This year at the SHOT Show Media Day I shot a tiny group on a Shoot-N-C target at 20 yards that others were just blasting at with their two-handed holds. The guy from Smith & Wesson said I must be a target shooter when he saw what I did. I sure am!