Today is the final report on the Hatsan Gladius long air rifle. It is also an interim report on the UTG G4 8-32X56mm scope with that special illuminated half-mil dot reticle. And, by extension, I will be reporting on the new UTG POI rings, though it is difficult to make much of a report on rings. If they do their job they should be almost unnoticeable.

It was back to the 50-yard range for the Gladius. I knew that H&N Baracuda Match pellets with 4.50mm heads were the best pellets tested so far, so today I threw in some new pellets — just to see if I could find something even better. When I mounted the new scope last week I got the rifle sighted-in at 25 yards, but I didn’t shoot any groups at that distance. All my time was taken up evaluating the new UTG POI rings, which performed as advertised. In fact, let’s address them right now.

I have just one thing to add to what I have already said about these rings. Because they are held to such tight tolerances, they are not the rings to use when you want to shim! If your rifle has a droop problem, find another way to solve it besides shims if you are using these rings. These rings fit the scope tube so snug that shims would just defeat all that the rings provide. The entire base to which the rings attach needs to slope downwards, rather than doing anything odd like shimming one of these rings. They are so tight that they could easily bend the scope tube if they are not installed correctly.

I shot from a bench at a target 50 yards away. The rifle’s power was set to 4, which you can look up in Part 2, if you are curious. That is a relatively high setting. The range is 1-6.

I arrived at the range a full hour before sunrise, so the stars were out when I set up. By the time everything was ready to go there were still 30 minutes before sunrise. This is where that illuminated dot reticle comes in so very handy. I discovered that while it is barely visible in daylight, at night that dot is quite bright. I used the buttons to select an intensity of the green dot (the most visible to my eye) three steps down from the brightest. At that setting, the dot didn’t cover much of the bullseye — perhaps 1/8-inch at 50 yards.

This feature allowed me to start shooting 30 minutes before sunrise. Any illuminated scope will give you a head start on the day, but this tiny dot is probably the best one to get started the earliest. So in my estimation, that dot works as advertised.

For some reason I didn’t start the test with the proven pellet. I knew the rifle was sighted-in for 25 yards, so I started the test with JSB Exact RS pellets. The first pellet landed very low on the target and somewhat to the left. I corrected with the elevation and windage knobs and fired shots number two and three. They didn’t move as much as anticipated so I cranked in a lot of up and right. Shot number 4 hit just outside the bullseye at 3:30, which I figured was good enough. So I left that adjustment where it was and fired 9 more rounds.

The other 9 shots went even higher on target, giving me a 10-shot group that measured 2.376-inches between centers, with 9 of the shots shots measuring 1.548-inches. If the 9 shots had been tighter I would gave tried a second group, but the RS doesn’t look like the right pellet for the Gladius. 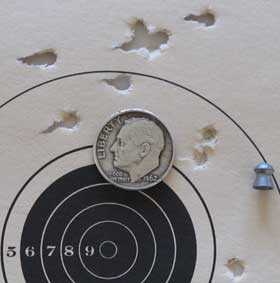 Next I tried the Air Arms Falcon pellet with the 4.52mm head. Although these are light for the powerful Gladius, they sometimes do surprise me. That was one of those times. Ten Falcons landed in 1.243-inches at 50 yards. This was so impressive that I tried a second group. 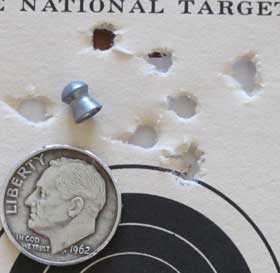 The second group of Falcons measured 1.615-inches between centers, with 9 of them measuring 1.213-inches. They are very good in this rifle. 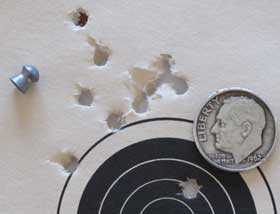 The H&N Baracuda Match pellets with 4.50mm heads were the best pellet to this point in my testing. The best 10-shot group at 50 yards I got in Part 4 was 1.148-inches across. On this day 10 of the same pellets went into 0.981-inches. That’s better, but still in line with what I got in the last test when the UTG 10-50 sniper scope was installed. It iwas the single best group of the test. 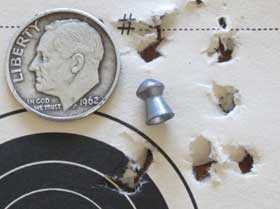 So, the Baracuda Match with the 4.50mm heads are still the best pellets, but the Falcons look like they would be worth further exploration, if I owned this rifle.

Everyone keeps telling me that H&N Field Target Trophy pellets are good, though they have never shot well for me. I thought I would give them a chance in the Gladius. These are the ones with 4.50mm heads. Ten of them made a 2.503-inch group at 50 yards, so they aren’t for this Gladius. 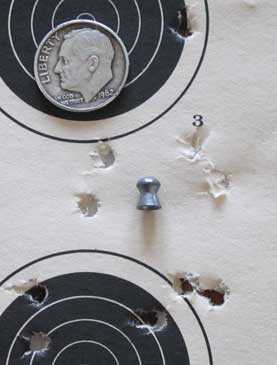 Today’s test revealed how nice the new UTG G4 8-32 power scope is. But even all that additional power didn’t make the Hatsan Gladius any more accurate at 50 yards. I think that is the point to remember.

This is the last time I will test the Gladius. We now have a very good picture of what this PCP rifle is like and what it can do. I will continue to evaluate both the G4 scope and the POI rings on other guns.