Today we begin to look at the accuracy of the Hatsan Gladius long. Gladius, Maximus — I must have missed the memo that said 2016 is the year for Roman names.

I decided to shoot the first test indoors at 25 yards. That would familiarize me with the rifle and also allow me to test the potential of several pellets. I mounted a UTG 10X50 Accushot SWAT scope on the rifle because it seems to compliment the bullpup styling. It’s short, yet plenty powerful for those longer shots I’m going to take. And it comes with UTG mounts that have a Weaver base to fit the rail on top of the Gladius receiver. So mounting went quick, because the scope was already in the rings.

The power was set to the number 3 for this entire test. I wanted to keep my shooting quiet, and 3 seemed to be a good combination of power and quietness.

I shot the first shot at 12 feet and found the scope was close enough to back up to 10 meters and try again without adjusting. Shot number two at 10 meters confirmed that the rifle would be on paper at 25 yards. So I backed up to my MTM shooting table at 25 yards and began the test. The rifle was rested on a sandbag for all shots.

The 10-shot magazine was initially loaded with H&N Baracuda Match pellets with 4.53mm heads, and I had fired 4 shots to this point — one at 12 feet, one at 10 meters and two at 25 yards. So, I fired the last 6 shots after adjusting the scope for 25 yards. Six pellets went into 0.57-inches, center to center. That’s a pretty good start! 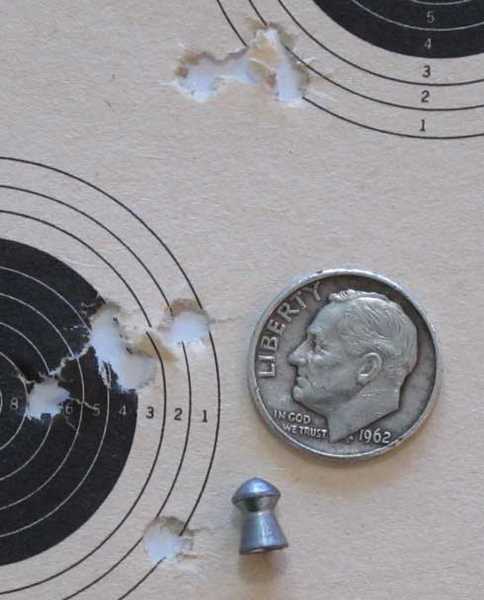 At 25 yards, 6 H&N Baracuda Match with 4.53mm heads made the 0.57-inch group to the left of the dime. The hole next to the pellet and the two holes at the top (they look like three, but there are just two) were made during sight-in.

I’d like to note that the Gladius is so quiet on power setting 3 that one of my cats came into the room where I was shooting and went to sleep! So the rifle is kitty-certified as quiet. On setting 3 the discharge rivals a Benjamin Marauder set to the same power level.

I wanted to try a number of pellets, so I didn’t re-shoot this pellet. I went on to the H&N Baracuda Match pellets with 4.50mm heads next. Ten of them went into 0.339-inches at 25 yards. That’s the smallest group of the entire test. 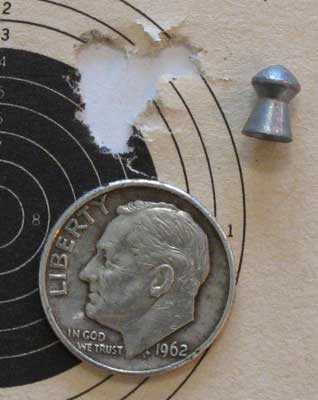 I want to say one thing about the scope. I adjusted it between each group, trying to bring the shots to the center of the bull. I have noted in the past that this particular UTG scope seems to have no stiction. When it is adjusted it goes straight to the new setting — something that cannot be said for most scopes. Now you understand why the groups appear to be migrating closer to the center of the bull as the test progresses.

I wondered about the Gladius’ air usage. At this point, with 20 shots fired, the rifle had dropped from 190 bar to 150 bar, which is in the center of the green band on the pressure gauge. It seemed to be ready for more shooting, so that’s what I did.

Next up were 10 H&N Baracuda Match pellets with 4.52mm heads. The 4.53mm heads had grouped much larger than the 4.50mm heads. What would these pellets do?

The also grouped larger. Not as large as the 4.53mm heads, but significantly larger than the 4.50mm heads. Ten made a group at 25 yards that measures 0.543-inches between centers. It seems the Gladius likes the smaller head size. 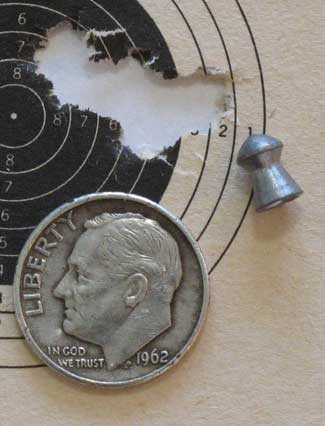 The Gladius has a circular clip that I have been calling a magazine, because that’s what Hatsan calls it. One problem such magazines have is they limit the length of pellets that can be used. If a pellet sticks out beyond either side of the magazine, it can jam the feed mechanism and the entire gun. H&N Sniper Magnum pellets weigh 15 grains and get most of their weight from a very long body. So if they will fit in the magazine, you’re pretty well set for most other pellets. And they do fit — just!

At power setting 3 these heavy pellets are probably moving too slow to be as accurate as they can be. Ten of them went into 1.192-inches at 25 yards, but 8 are in 0.48-inches. I see some potential for greater accuracy, and I will include them in the 50-yard test. 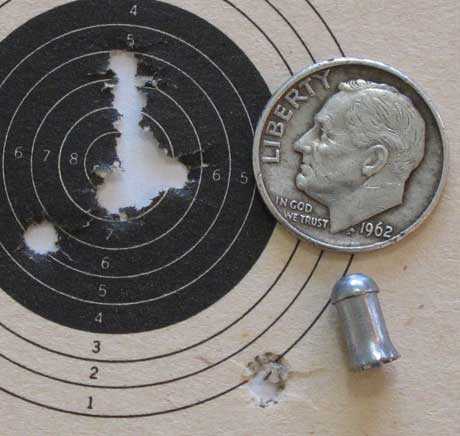 Ten of the long H&N Sniper Magnum pellets went into 1.192-inches at 25 yards, but 8 of them are in 0.48-inches. This pellet deserves a second look when it’s driven at higher power. Notice how well-centered this group is.

At this point I noted the manometer was reading down close to the bottom of the green, which is just below 100 bar. I had fired 40 shots on power setting 3, so at 25 yards there are at least 40 accurate shots on power setting 3. Remember when we were looking at the velocities on Part 2 and we saw a large variation as the shooting progressed, I said I would reserve judgment until I saw some results on paper. Here they are. The only thing I haven’t done is leave the scope adjustments in one place, so there is no good way to know whether or not the groups move as the pressure drops. But for the ten shots in each group, the pellets seemed to all be hitting the same place, with the exception of the Sniper Magnums.

I filled the reservoir at this point and noted there was about 2,200 psi when the fill started. The final pellet I tested was the JSB Exact Heavy that weighs 10.34 grains. Ten shots made a group at 25 yards that measures 0.416-inches between centers. And notice that it is well centered. I finally got the scope dialed-in. 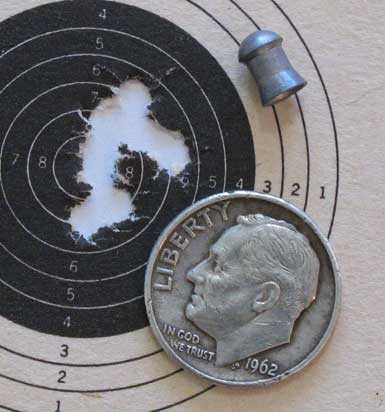 Ten JSB Exact Heavy pellets made this 0.416-inch group at 25 yards. This is another pellet to take out to 50 yards.

I have to admit, so far the Gladius has surprised me. Although it is a bullpup it fits me very well and the cocking lever is super accessible. It’s also very easy to cock without removing the butt from your shoulder.

The noise at discharge is surprisingly low. I didn’t notice it as much in the velocity test, but today it was obvious. This is a seriously quiet PCP when it’s run on lower power.

The feeding of the pellets from the magazine seems flawless. I never had a problem in this test. I couldn’t even feel the pellets going into the breech — that’s how efficient the loading arm geometry is.

I am surprised by the number of accurate shots I get on a charge of air. This will be easier to test at 50 yards, but so far it’s impressive. 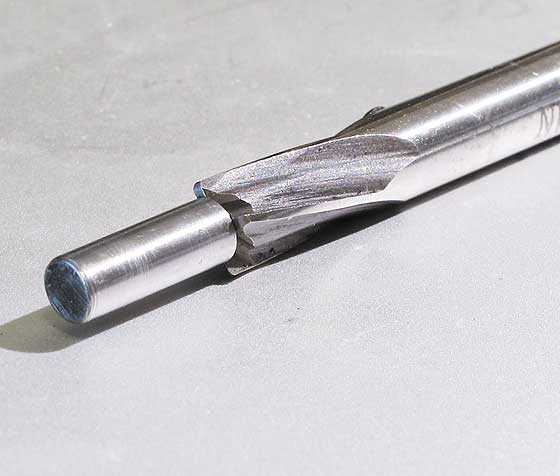 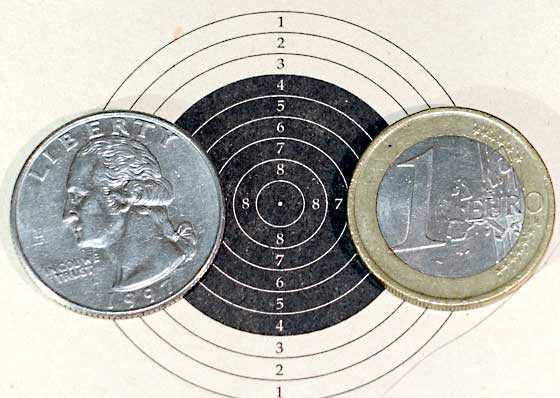 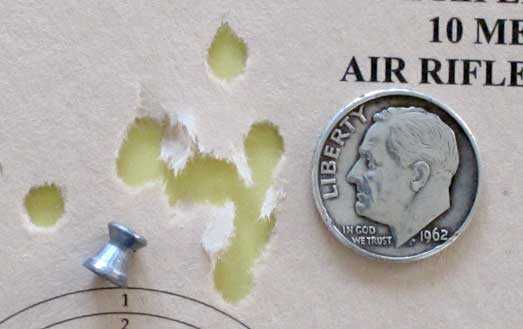