Today we learn how powerful the .22-caliber Diana AR8 Professional Success air rifle is. This will also give those who wonder about the rifle a good idea of what it’s like.

I’ll begin with the cocking effort, because on this rifle it is really hard! I registered 54 lbs. on my bathroom scale. That makes it a two-hand job for me. I can do it with one, but just barely and not for many shots. Because it has a gas spring, the max effort starts almost at the beginning of the stroke.

A reader was curious whether the AR8 has a slanted breech block like most Diana rifles. The answer is yes, the breech does slant. Let me show you what that does to loading. 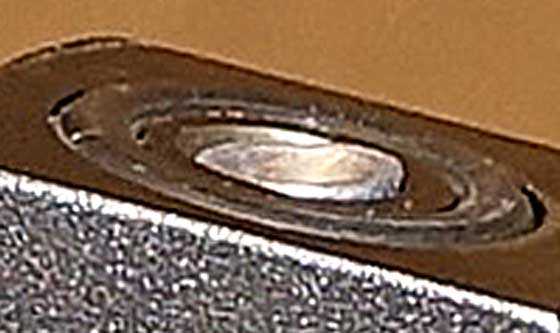 When the breech slants, a portion of the pellet skirt will stick out like this.

When the breech slants, part of the pellet skirt will stick out.When that happens… 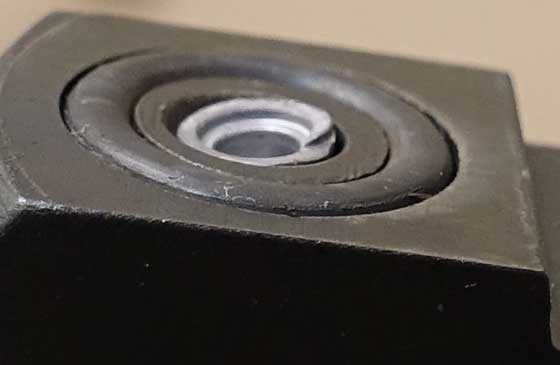 When the breech is closed, the part of the skirt that sticks out gets bent like this.

I knew from the few times I had shot before that the rifle was detonating, so I selected the heaviest pellet first. That was an H&N Baracuda Match pellet. I happened to select one with a 5.51mm head, but they all weigh pretty much the same — about 21.14 grains. Remember the “magic” number? That’s the velocity at which the weight of the pellet in grains equals the muzzle energy in foot pounds. That number is 671 f.p.s. I expected faster from this rifle, so let’s see what it did.

Shots 1-3 registered 764, 678 and 564 f.p.s., respectively. That’s not right. Fortunately I have a lot of experience with these mega-blaster gas spring guns and I knew what it was. I was holding the muzzle too close to the start screen of the chronograph. The muzzle blast of air is so sharp that it actually “fools” the screens. I backed up another 6 inches and the next shot went out at 923 f.p.s. That was more like it. So I counted 10 shots from that point.

The rifle averaged 904 f.p.s. with a low of 844 and a high of 929 f.p.s. That is a spread of 85 f.p.s. and is diagnostic of detonations. You can hear them sometimes, but even when you can’t they are still there. There is nothing to do for it but keep on shooting.

Next up were some Air Arms 16-grain dome pellets. In a powerful rifle like the AR8, these qualify as medium-weight pellets. They averaged 857 f.p.s., which is much slower than the heavier Baracuda Match, but what it means is the rifle is starting to simply diesel and not detonate. The spread went from a low of 812 to a high of 902 f.p.s. which is a 90 f.p.s. difference. So, there is still some detonating happening. In my experience it sometimes takes many shots before this goes away and the rifle calms down. Look for the average to be slower when that happens.

The last pellet I tried was the RWS Superdome that acts like a lightweight pellet in a rifle this powerful. These 14.5-grain pellets averaged 915 f.p.s. and this time the spread was just 33 f.p.s., from a low of 896 to 929 f.p.s. That tells us the gun is settling down. If we were to shoot the Baracuda match pellets again, we could expect to see a lower average at this point. Let’s do that and see.

Since I was tiring from the cocking effort, I only shot 5 Baracuda Match. The average was 721 f.p.s. with a 38 f.p.s. spread. It went from a low of 706 f.p.s. to a high of 744 f.p.s. That’s definitely slower than before, and it illustrates the fact that the gun was detonating before. It has probably stopped doing that now.

At this point the rifle is generating 24.4 foot-pounds with this pellet. The Superdome is lighter and should produce more energy in a springer and the average of 915 f.p.s. is good for 26.96 foot pounds. I didn’t show the enrgy for the earlier shot strings because I believe they are artifically high from the detonations.

The trigger pull on the AR8 is shockingly light. I measured just 15 ounces when stage two broke, and there was no creep. This is the lightest sporting trigger I’ve ever measured on a gun straight from the box!

The AR8 has almost no vibration. The recoil, however, is heavy. My trigger finger was pounded by the triggerguard as the rifle moved in recoil every time it fired. This is something to consider.

Lightest sporting trigger I ever felt. Feels like a home tuner gone too far.

The rifle has a lot of power. It’s clearly a magnum spring gun.

The recoil is heavy. It will make you take notice.

Cocking is a chore. This is no plinker, that’s for sure. It is an all-out hunter. Fortunately you can leave the rifle cocked for hours, because compressed air never takes a set.

The AR8 is a large powerful air rifle. Let’s see if I can mount a scope and successfully sight her in fo the accuracy test that’s next.