If you have read this blog very long, you know that I cannot help from referring to the Diana model 27 rifle as often as I can. That’s because of all the airguns I have ever shot, it is the one I like the best. To me it embodies the essence of the reason I am an airgunner. It’s lightweight, easy to cock, quiet, accurate and has an adjustable trigger that can be set very fine.

Like most Americans, I remained ignorant of the Diana model 24 that turned into the 240. It wasn’t imported by large U.S. dealers for many years and, despite our European readers touting its virtues and advising me to try one, I never did. Well, that has changed. Pyramyd Air now brings in the Diana 240 Classic and for $200 you can buy a lot of airgun.

On the surface, the Diana 240 Classic is a breakbarrel rifle that’s made for older youth. I say on the surface, because, like most other guns made for this market (Daisy 853 etc.), it also appeals to experienced airgunners who just want to shoot and aren’t concerned with velocity. The Diana 27 was also such a gun.

The stock is a classic beechwood stock with no embellishments. It looks very similar to a model 27 stock, except this one has a black plastic buttplate, where the 27 butt is plain wood with a rubber button to prevent slippage when the rifle is leaned in the corner.

All the metal parts are deeply blackened and polished smooth. They have a luster but not a deep polish. There are some plastic parts like the trigger, triggerguard and the front sight assembly. But the rifle is made mostly the same as they made them in the 1970s.

The rifle comes with open sights. The rear has a fiberoptic tube (a green dot on either side of the rear notch) and is adjustable both ways. The front sight is a hooded fiberoptic tube atop a plastic ramp. My eyes are almost at the point where I can see the sights well enough to shoot. Hopefully they will be where they need to be in another week or so.

There are also two parallel dovetail grooves cut into the top of the spring tube, 11 millimeters apart. Unlike the more expensive Diana spring rifles, there is no scope base mounted — just those grooves. I don’t think Diana anticipates people mounting a scope on this one. There is also no hole for a vertical scope stop pin, so if you plan to scope the 240 Classic, I would think about using a BKL clamp-on mount of some sort. The recoil is so light that there should be no problem with scope movement.

Diana lumped several rifles into the one owner’s manual and the written instructions for the adjustable trigger in the manual don’t apply to the 240 Classic. The two-stage trigger has one screw in front of the blade that adjusts the length of the first stage travel and that’s it. 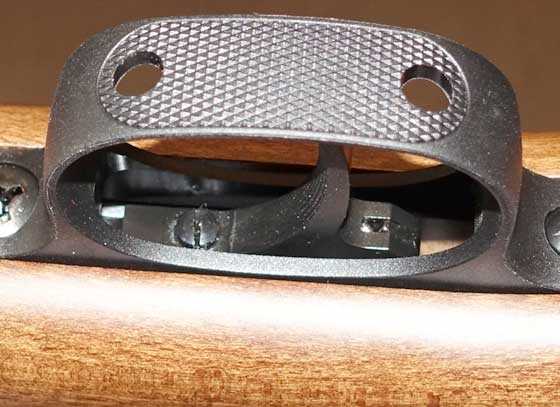 The trigger has one adjustment screw that controls the first stage travel length.

I will test the trigger more thoroughly for you in part 2, but for now know that it is reasonably light with some creep in stage two. It is not equivalent to the model 27 trigger.

I had to shoot it, even though today is not a test of any kind. It cocks easy (specs. say 20 lbs. and that sounds about right) but the ball bearing detent is stiff and requires a muzzle slap to break the barrel open. The stroke is short because the rifle doesn’t develop a lot of power. Specs. say 580 f.p.s. in .177, which is the only caliber it comes in.

The rifle shoots smooth with a very light recoil. I was ready with my Tune in a Tube grease, but it looks like it won’t be necessary. I must say the new owners of the Diana brand seem to be doing a fine job of maintaining the quality of their rifles.

Okay, I will say it. The 240 Classic could be seen as a less expensive substitute for the HW 30. Not the higher-end 30S that has the Rekord trigger; just the standard HW 30. Of course you give up about 100 f.p.s., but you also save over $50. I’m sure that will start an argument, but that’s the way I see it.

At any rate, I get to test this rifle and it looks like it’s going to be fun. At the end we will all know how close it comes to being a modern Diana model 27.