The new Colt Peacemaker is also available with ivory grips.

When Umarex started making the Colt Single Action Army BB pistols a couple years ago, we all knew they had a large number of variations to go through. The most popular of these was the very first Colt SAA — the revolver with the 7.5-inch barrel that was also called the Peacemaker, The Frontier Six-Shooter and the Colt Army .45. This is the revolver so many western stars like Paladin and Marshal Dillon carried. It’s not the fastest in a gunfight, but for 300-yard shots, it’s the one to have.

300-yard shots with a handgun?

Yes. When I was a gunfighter at Frontier Village in San Jose, California, I used to shoot live ammo on my days off. I was reading Elmer Keith at the time and didn’t know that a handgun could not shoot accurately to 300 yards, so of course I tried it and found that it worked just as Keith described. Too bad Keith was a liar, because so much of what he wrote is still true today! 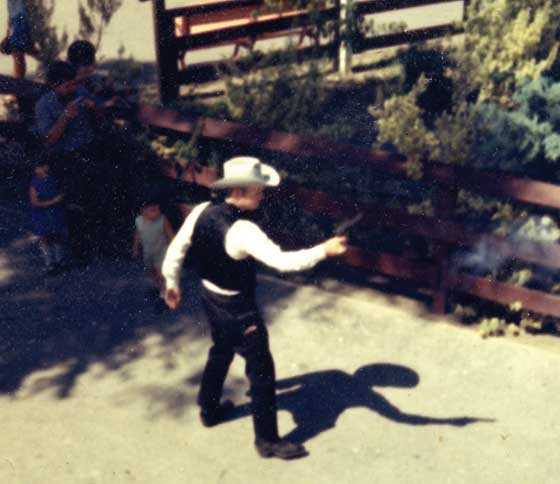 I was a gunfighter at Frontier Village when I was in college.

Here we have a Colt SAA revolver BB pistol that’s nickel-plated. The standard gun comes with dark simulated wood grips, but for $20 more you can get the one I am reviewing today. I think the look is worth the price.

Pyramyd Air sent me this airgun a couple months ago. It’s one they make up themselves and you may have some difficulty finding it online. Open the web page for the gun with the dark grips, and this one is an option that opens inside that page. Click on the “Pick your option” box.

What’s different about this one?

We have looked at the first SAA BB pistol that came out. We also saw a Duke weathered pellet pistol. But today’s revolver is the first we have seen with a 7.5-inch barrel. In many ways it is the same as the other BB revolvers — 12-gram CO2 cartridge in the grip, smoothbore barrel, shoots using cartridges with one BB apiece, is single action only. But the longer barrel will mean faster shots for sure.

Hammer doesn’t go all the way down

Before you ask, the hammer does not stay all the way down on this pistol. It does go down when the gun is fired, but it then rebounds to sit 1/4-inch fro the frame. 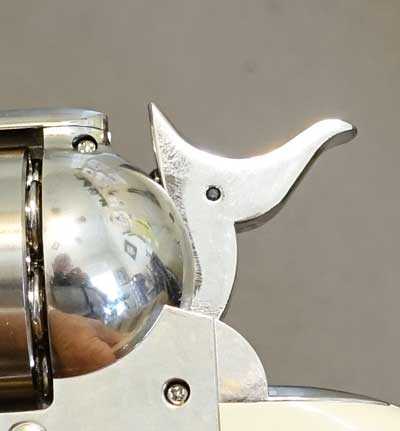 One nice feature about this airgun is it is fully licensed by Colt. That makes it an authorized Colt and for a Colt collector, that makes it one for the collection.

Aside from the finish this is a six-shooter that loads cartridges through a gate on the right side of the frame. The hammer is drawn back to half-cock (one click back) and the cylinder can be rotated clockwise, when seen from the rear. Hold the muzzle down as you do this or the cartridges will slip back and tie up the cylinder.

The gun weighs 2 lbs. 4 oz with the cartridges loaded but no CO2 cartridges installed. That’s not too far off the weight of the firearm.

With a firearm you have to use the extractor rod to push each cartridge from the cylinder after they are fired. That’s because the cartridges swell under the pressure of firing and hug the walls of each chamber tightly. Of course that doesn’t happen on the BB pistol because the cartridges are under no real pressure — maybe a couple hundred pounds at most, rather than the 15,000 psi of a .45 Colt cartridge. So they tend to fall out easily.

The sights are fixed. The front is a low blade and the rear is a notch cut into the rear of the frame. 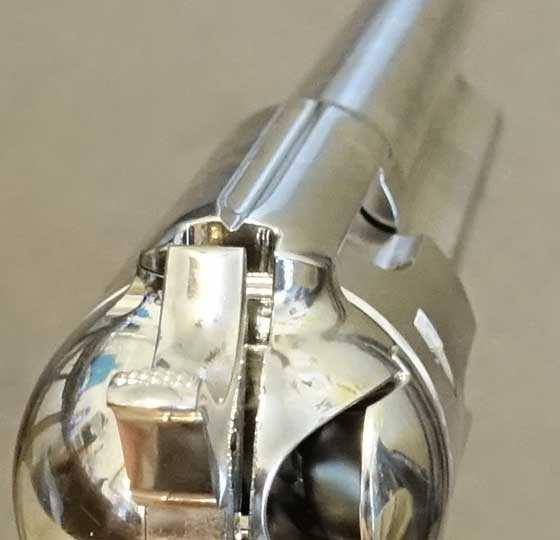 Rear sight is just a notch in the frame.

Safety? On a revolver? Yes, to appease Agatha Christie and all the other mystery writers, to whom guns are the biggest mystery of all, this revolver has a safety. It might also be there for operational safety reasons. When it’s on the hammer can’t be cocked. If the hammer is already cocked and the safety is put on, pulling the trigger does nothing. 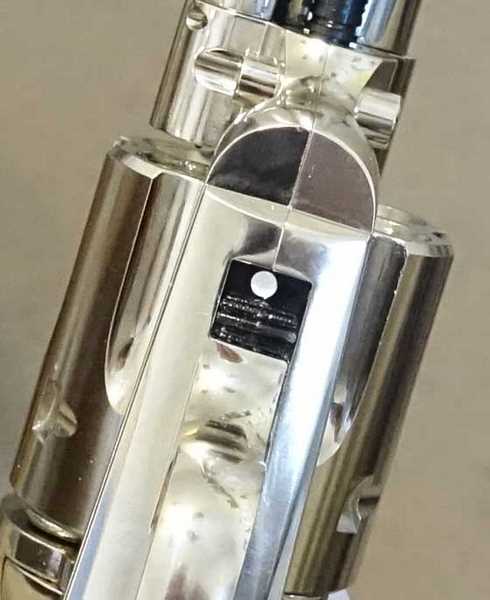 Safety is on the lower grip strap. It’s on right now.

This is a revolver people say they have been waiting for. Let’s see the reaction.