I had some operational issues today and learned some things that may be useful to new owners of the Benjamin Wildfire. Today’s test was ostensibly to mount a dot sight and test the rifle for accuracy at 10 meters. This is in preparation for moving back to 25 yards.

First up is a problem I had when filling the rifle. I filled from two different large Carbon fiber tanks and both have this problem. When I try to bleed the line to disconnect the rifle from the tank, the pressure in the line holds the inlet valve of the rifle open and all the air in the reservoir leaks out.

I called Pyramyd Air and talked to Stacey in the tech department. She told me that some air tank valves have bleed valve channels that are so small they do this. She suggested I open the channel just a little with a Swiss triangular needle file. This is not recommended for everyone, but I’m pretty good with a file and small work, so I decided to try it. Only I forgot about it until I filled the Wildfire this morning. Then remembered, and it was too late. With the time it would have taken, you would have gotten a blog about that instead of the rifle. 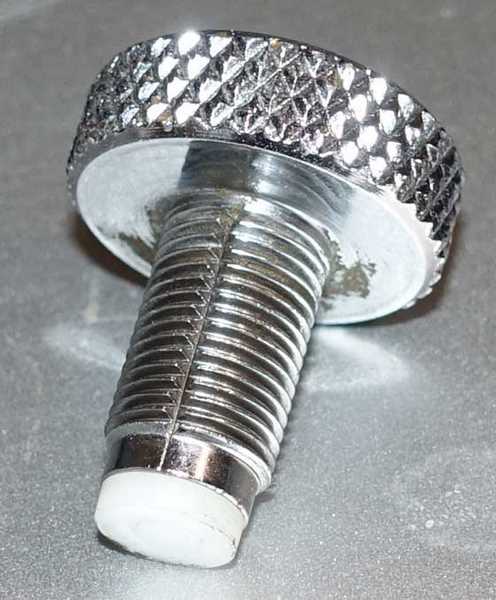 When the bleed screw is opened, air exhausts through that narrow channel in the screw threads. This one is slightly too narrow for the Wildfire.

So it was the Air Venturi G6 hand pump to the rescue! It filled the gun and exhausted perfectly. Once I modify the two bleed screw on my air tanks I will be able to fill with them again.

The other problem I had was with the dot sight. I’m using a 23 year-old Tasco Pro Point sight that has been on dozens of guns over the years. At some point I dented the sight barrel rather deeply by tightening the scope caps too much. The sight still works, but it doesn’t align with the bore any longer. I do have a solution, but it took me until the end of today’s test to come up with it — because I didn’t know how far off  the point of aim the sight would be! Instead of clamping to the tube on both sides of the turret, I will only clamp on the side that isn’t dented. The thin 2-piece BKL scope rings I am using will allow for that, and the Wildfire doesn’t recoil, so there’s no problem. 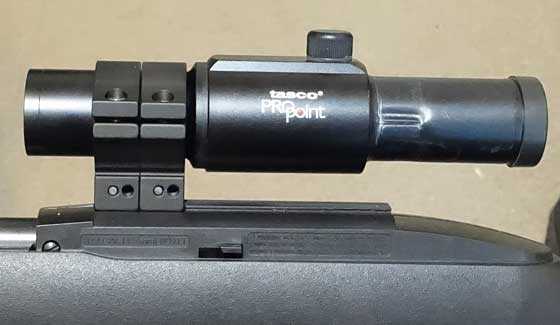 You can see the dents left by overtightening scope rings in the past (on the right of the tube). I will now mount the sight like this, which the thin BKL rings permit.

I’m using BKL 303L MB rings. They are thin enough to allow what I want to do.

I took a different tack today. Instead of testing several pellets, I used the pellet that was most accurate in the previous test with open sights. That was the Crosman Premier lite. I sighted-in at 12 feet and discovered that the group was high and to the right. Then I noticed that the dot sight was misaligned because of those dents and probably could not be adjusted to the point of aim. I decided to shoot 12 shots offhand at 12 feet anyway, and they gave me a pleasingly tight group that measures 0.343-inches between centers. 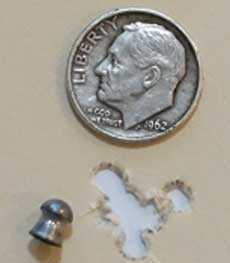 I then backed up to 10 meters and shot 12 more pellets. This time they grouped into 0.66-inches. While that’s not terrible, I knew from the last test in Part 3 that this rifle could do better. 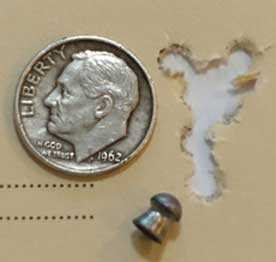 This group was vertical and I noticed while shooting that the red dot was very large. I had the dot sight illumination cranked up all the way because the target was so bright, so I tried again. This time I only shot 10 shots.

The second 10-meter group was 10 shots into a group measuring 0.991-inches between centers. This wasn’t good. I was fighting both the brightness of the target and the size of the red dot that was adjusted to 11 on the brightness scale — as high as it goes. 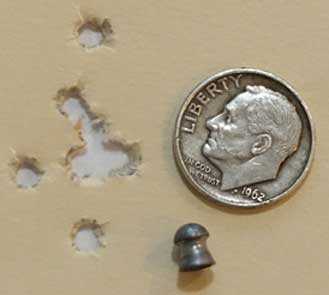 At 10 meters 10 Premiers went into 0.991-inches. The group is very vertical. I was struggling with seeing the dot against the bright target and the fact that the dot was large and therefore less precise.

After this group it dawned on me that a bright target was making my red dot appear dim. So I turned off the 500-watt lamp that normally illuminates my target and immediately things got brighter through the sight. I was able to adjust the dot brightness from 11 down to 5, where it appeared as a tiny dot once more. This was what I had been hoping for. Now it was time to shoot a final 10-shot group.

This last group was the clincher. The pellets acted like they were guided to the target! And this time I got what I was after — a true representation of the accuracy potential of the Benjamin Wildfire. Ten shots went into 0.528-inches at 10 meters. By a small but significant margin, that is the smallest group the rifle has give so far at this distance. With open sights the smallest group measured 0.573-inches for 12 shots. 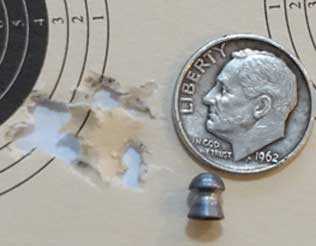 With the light turned down and the red dot as small as could be seen, the 10-shot group shrank to 0.528-inches at 10 meters.

First of all, I learned a lot from this test. I learned about filling the Wildfire and I learned about mounting tired old optical sights. Those thin 2-piece BKL rings will become an important part of my “go-to” kit from now on.

I also learned that dot sights don’t need or even like bright targets. And I discovered (I hope) a way to salvage an old reliable dot sight that in all ways has served me well.

The Wildfire is performing exactly as I envisioned — which is to say very well. It is what it is — a PCP version of the 1077 that’s a classic. One more test to do — see how it shoots at 25 yards.