Before we begin I want to draw your attention to the fact that Pyramyd Air has made it possible to post pictures to the blog. The Choose Image box is right there with the comments. This is something you have long asked for. I hope you will enjoy this new feature.

Today I start looking at the Gamo Swarm Maxim multi-shot rifle. This is a repeating breakbarrel springer — a type of air rifle that has never been very successful in the past. The problem is getting soft lead pellets to feed reliably without distorting.

Feeding is the problem

Gamo made several breakbarrel repeaters under the El Gamo name years ago and they were all quite fussy about the length and shape of the pellets they would feed. If you owned one you had to stock up on the pellets it liked because almost anything else would jam. These rifles were called by their titles with -matic tacked on the end. There were names like the Expomatic and the Gamatic as so on. They fed from linear magazines that caused the feeding issues. Anyone who has owned a Crosman 600 pistol knows what I’m talking about.

The Swarm Maxim solves that problem by using a rotary magazine, similar to the type many precharged rifles use, though not a copy of any of them. I will watch the performance of this magazine closely.

You know I’m going to test the Swarm with different pellet types, so we can lay that aside for now. But what about the sights? As you can see in the pictures, the repeating mechanism sticks up so high that open sights are not possible. Also, it would appear that at least the lower half of the scope is blocked. What affect does this have on sighting? I will report on that for you, but I shot the Swarm at the SHOT Show this year and can already tell you the target is in no way obscured by the feed mechanism. Undoubtedly some light from the target is blocked, but I don’t recall seeing anything in my way as I sighted.

The next issue that someone raised is how possible it is to dry-fire this rifle. Because it uses a rotary magazine, will it stop firing when the pellets run out, or can you keep on cocking it — and possibly shoot a shot without a pellet?

I remember a Gamo sales campaign from the late ‘90s that said you could dry-fire their spring piston rifles 10.000 times without damage. They no longer say that, plus I think most airgunners would not want to do it, but, since the Swarm is a repeater, this needs to be evaluated. 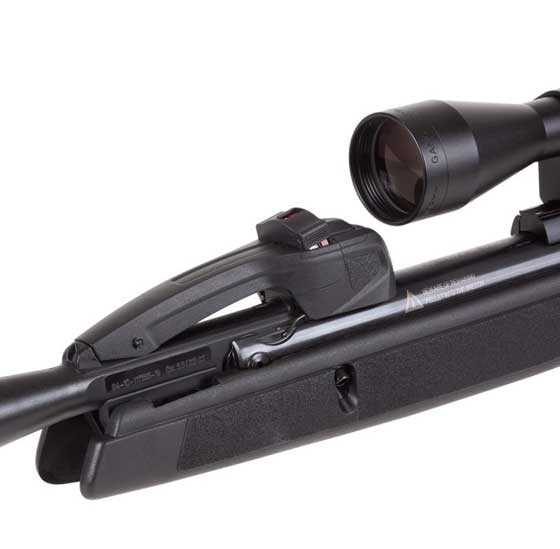 Does the pellet feed mechanism block the image of the target in the scope? I think not, but I will report in a future part.

The owner’s manual tells me it’s possible to double-feed a pellet (by cocking the barrel more than once), so you do need to pay attention. The manual does give a procedure for checking to see whether a pellet has already been fed without the risk of double-feeding. I will look at that for you.

The Swarm comes with a 3-9X40 scope. The fixed parallax is set at 25 yards. A one-piece scope mount comes already attached to the scope, and this is mounted by you to the special scope base on the Swarm. I will have more to say about mounting and using this scope in Part 3.

I get to test a couple things on the Swarm that, to my recollection, I have not evaluated before. The first is the Custom Action Trigger (CAT). This is a 2-stage trigger with adjustments for both the length of the first stage travel and the length of stage two. I guess stage two has some travel in it. The owner’s manual has excellent instructions for this, so I will adjust the trigger in part 2 of this report and let you know how it goes.

The trigger blade is very straight, which feels wonderful. The blade is also pierced with three holes for a racy look.

The safety is manual, according to the owner’s manual! That puts the shooter in complete control, which is how experienced shooters like to operate.

The Swarm also has Whisper Maxim Sound Suppression Technology. In other words, a silencer. Not sure I ever tested one of those by that name. Silencers on spring guns don’t do much because most of the sound comes from the powerplant, not the pellet leaving the barrel. And when your cheek rests against the stock the powerplant sound is transmitted through your cheekbones into your head, so the gun sounds louder to the shooter than anyone else. Still, I will test it.

The first impression you get when picking the Swarm up is how light it is! According to the specs it weighs just 5.64 lbs. I weighed it on my postal scale, where it registered 5 lbs. 8 ozs. on the nose for the rifle and empty magazine. Of course the scope will add more weight, so once I mount that I will weigh it again. But the bottom line is — this springer is light!

The rifle is all black, like most Gamo airguns these days. It is powered by a Gamo IGT gas spring, and the cocking effort feels very reasonable. I’ll test that for you in part 2. Velocity is supposed to be 1300 f.p.s. with Gamo’s PBA Platinum pellets. That means with a heavy lead pellet I can probably get the velocity down into the high 900s, or so.

The pull measures exactly 14 inches and the rubber buttpad is both soft and thick. The rifle can stand in a corner without slipping. There is also a colored spacer between the pad and the stock. The color corresponds to Gamo’s recommended use for the rifle Red, like the Swarm has, is for pest control; green is for hunting and blue is for targets and competition. To their credit, Gamo lists the animals to be hunted as rabbits, squirrels, raccoons, and crows — not a word about feral hogs.

The barrel has a fat black plastic jacket that’s deeply fluted. It provides a comfortable handle for cocking.

A lot of the feeding reliability resides in the unique 10-shot rotary magazine. You get one with the rifle, and you can also buy an extra magazine or two. The price is quite reasonable. The magazine has numbers that tell you how many pellets remain. There is also an international warning sign (an exclamation point in a triangle) when the last pellet has been loaded. That would be how you know the gun is empty, though it’s up to you to remember whether the rifle is still loaded and cocked when you see that symbol, because the mag will show empty then, too. 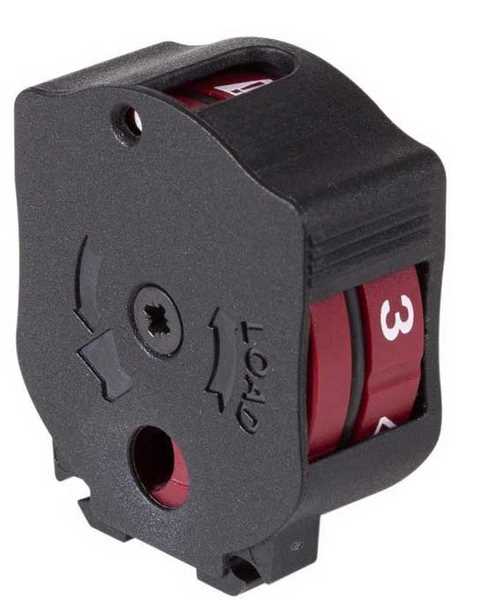 The magazine has clear indications of how many shots are left (top window).

There is a lot to test and evaluate with the Swarm. It’s as different as a breakbarrel rifle can be. I have said it about other $200 springers and I’ll say it about the Swarm — if this rifle is accurate it could well be a world beater! We just saw a prolonged test of an accurate air rifle, so you should all know where the bar is set.