I was frustrated this morning while trying to sight in the Kral Puncher Breaker bullpup for the first accuracy test. I was getting nowhere and burning time. It’s not the rifle’s fault. It was a confluence of imponderables that would have taken too long to sort out and get a blog ready to publish in one day. I will give you the details when I report on the rifle, so I thought I would do tomorrow’s blog today.

In case you wonder, “they” are everyone who is not us. That’s wisdom from the oracle of the north — Red Green. In today’s case, they are the manufacturers.

Back in 2005 when I first floated the idea of a 2000 psi PCP to several manufacturers I was met with skepticism. You can’t get 1000 f.p.s. on 2000 psi of air pressure. People don’t want cheap PCPs! As long as PCPs cost under a thousand dollars, that’s good enough, because the PCP market is very small.

That was the wisdom of the day in 2005/6. But one company actually wondered whether it might be possible. Ed Schultz of Crosman prototyped a PCP for my idea based on the Crosman 2260 and, lo and behold, the Benjamin Discovery was born.

Okay, Tom, it does work, but do people really want a cheap PCP? Is there a market? I was asked that question by the CEO of Crosman before we began the Discovery’s development in 2006. I said yes, but who really knew? It had never been tried.

Today airgunners are buying more expensive PCPs than they used to. That market has certainly increased. But the market for PCPs costing less than $300 is in orbit! Look at what we have.

And those are just the ones starting at less than $300. I wanted to list everything less than $500, but there are just too many! In 2006 only AirForce Airguns made PCPs for under $500. Ten years later a company stands out if they do make a PCP that’s pricy.

The thing I was told could never happen in 2005 has become the fastest-growing segment of the airgun market in ten short years! It wasn’t just Crosman and me with the Discovery, either! Oh, we started the pebble down the slope, but the momentum built, and today every manufacturer who wants to thrive has to pay attention to this segment of the market.

I could say lots more about companies that are listening to the demand for shrouds, regulators, repeaters, better triggers and even big bores, but I’ve made my point.

I remember a SHOT Show in either 1997 or ’98, where I met a new scope manufacturer. They had a scope that was so short! It was half the length of all other scopes. I spoke to them a little and they were receptive to my thoughts. I told them if they would just change that scope’s adjustable parallax from a minimum of 25 yards to a minimum of 10 yards, airgunners would buy them. I would buy them. I meet a lot of people at every SHOT Show and everyone is hyped up on adrenalin, so who knows if any of them will deliver? But every so often, one does!

The next year I stopped by this company’s booth first thing and was surprised to see a scope whose parallax adjusted — not just to 10 yards. Not even to five! This short scope adjusted down to 3 yards! That’s only 9 feet! I told the manufacturer that airgunners would use these scopes to shoot insects with, and the Bug Buster was born! Yes, I’m talking about Leapers.

Leapers listens, and they try to give us the products we want. How about the 4-16 Bubble Leveler scope? We talked about it for many years and I saw several prototypes, but when I finally saw the production scope I was amazed. The optics must be seen to be appreciated. It is one of the clearest, brightest scopes available!

Here is a story many of you new guys won’t remember, but the folks who have been shooting airguns for 20 year know it very well. Diana breakbarrels used to droop severely. I spoke to their vice president of marketing at the SHOT Show about this. She assured me there was no problem because both the front and rear sights are mounted on the barrel. Besides — who puts a scope on an air rifle? Being German, she saw things differently. And their Diana 34 was already selling so well that they felt it was fine.

I went to my new friends at Leapers at the next SHOT Show with an idea for a scope mount base that wouldn’t strip out the shallow holes in the Diana scope base and also would not shear off that large-headed screw in the back. That was my idea. My buddy Mac piped up and said as long as they were fixing those things they might as well fix the drooping problem, too. The Drooper scope base was born!

Tens of thousands of these bases were sold and are still selling, but here is the bigger thing. Diana listened! They are taking more care today to minimize droop, as well as fixing many other things. And they changed their scope bases so the old UTG drooper base no longer fits.

Companies watch other companies, too

In fact, the new owners of Diana are paying close attention to the world market and what it says about their products. I recently tested a reader’s Diana 34P and was pleasantly surprised by the small but significant improvements I saw. This is more proof that airgun companies are listening.

This is a short report. I need the extra time to sort out the Kral scope and get the gun on paper. I will tell you everything when I cover it.

Just remember, you do have a voice and the airgun manufacturers are listening. 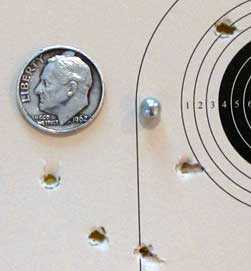