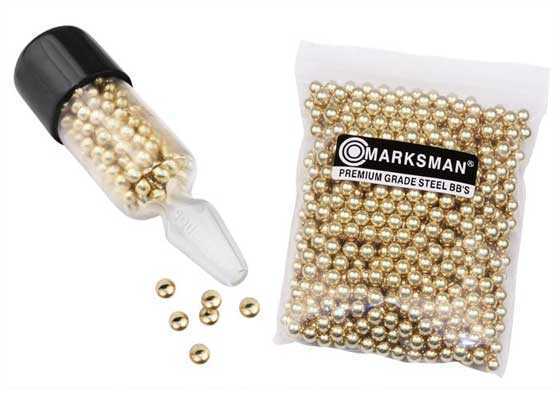 No history report today, but there will be a lot of history as the report unfolds.

If you are a veteran reader of mine, you know that I have harped for many years on the fact that steel BBs are labeled as 4.5mm, when they are really 4.3mm or so. Steel BBs range in size from 0.171- to 0.1735-inches in diameter. If you are curious about where the BB came from, read this report.

And then came the Marksman Premium Grade steel BB. To the best of my knowledge, it is the only steel BB in the world that comes close to 0.177-inches in diameter.

I measured five BBs and got the following:

Lead bullets and balls have been famous for centuries because they are malleable and conform to steel rifle barrels. Steel BBs are not malleable. They do not deform. They are what they are and there is no changing them in any easy way. So, a larger steel BB presents a problem for smooth bores that have been manufactured to accept BBs that are 0.171 to 0.1735-inches in diameter.

What does this mean? It means that the Marksman BB is going to be very tight in most or all modern BB guns, and indeed if you read the reviews on the Pyramyd Air website, that’s exactly what everyone says.

Will they fit any BB gun?

Do I have a BB gun with a big barrel?

Right away the Pioneer76 BB gun came to mind. I know from past testing that it isn’t that accurate. Perhaps that’s because the bore is too big for most BBs. So I grabbed the gun and started evaluating the BB’s fit.

Step one was to drop a BB into the Pioneer’s muzzle and see how it fit. It went into the barrel about 3/8-inch and then stopped. 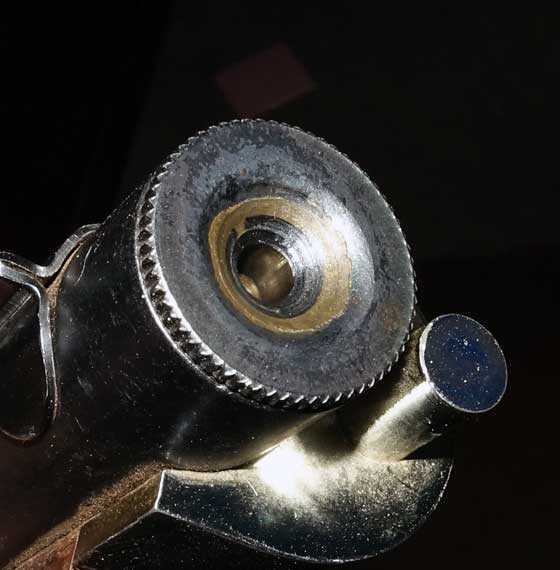 The BB dropped about 3/8-inch (0.375-inches/9.525mm) into the Pioneer bore, then stopped. I’m showing this angle to show the depth, plus not be overpowered by the camera’s flash.

So, the BB seems too large for the Pioneer bore. But what if it’s just that one spot and what if it’s only slightly too large? I didn’t push the BB any farther because I didn’t want to get it stuck hard, but I tried something different.

I tried loading three Marksman BBs through the Pioneer’s 50-shot forced-feed magazine. They went into the mag all the way, dropped to the bottom and seemed to make it around the curve at the bottom to line up with the bore. 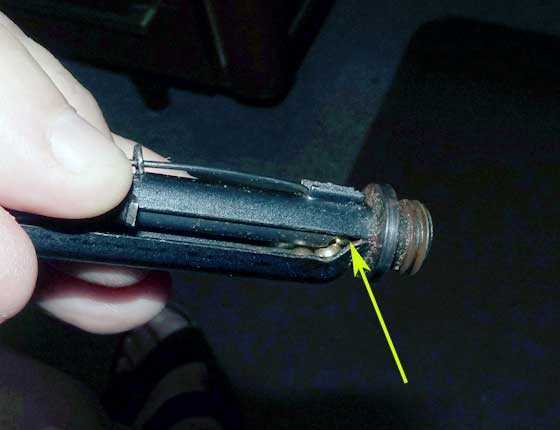 Three Marksman BBs are in the Pioneer magazine. The arrow points to the first one that has turned the corner and aligned with the barrel.

When I released the magazine follower the third BB was pushed into alignment with the barrel. Now I tried to install the barrel back into the BB gun. As you may recall, when this is done, the long air tube that sticks out from the plunger (piston seal) pushes the BB deeper into the breech.

But the shot tube would not go into the gun. I tried to push it in and it resisted. That means the air tube has pushed the BB into the barrel as far as it would go and the BB is now stuck. I can’t show you a picture of that because the BB is too deep in the barrel. But I can show you how we can tell that it is stuck

I tried to rod the BB out of the barrel with a cleaning rod from the muzzle. The shot tube was out of the gun while I did this. The BB is so stuck that the jag on the end of the rod was bent. 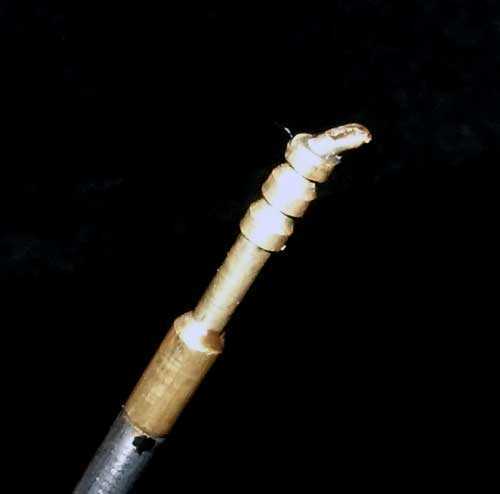 The Marksman BB is stuck hard enough in the Pioneer barrel that it bent my brass jag tip and still didn’t come out!

I will keep beating on that BB and eventually it will come out. How much damage I have done to my Pioneer magazine remains to be seen. But, am I dead in the water?

What more can I do? We know that the bores on modern BB guns are mostly going to be too small for this giant BB. Do I have anything else I can try?

Remember the Benjamin 700? I wrote about it last year. I remembered that it was supposed to have been made for steel Air Rifle Shot, but such things don’t exist — or at least I didn’t think they did! Air Rifle Shot was the name Daisy gave to the LEAD balls they downsized from 0.180-inches (size BB) to 0.175-inches to save lead and increase velocity. They did that around the turn of the 20th century. But I tried some of that in the Benjamin 700 and it didn’t work. It jammed in the feeding mechanism. But did it jam because of the size or because it is lead? I didn’t know.

So far the Benjamin 700 seems to feed and shoot the Marksman BBs fine.

Then I dropped a Marksman BB down the muzzle of the 700 and it disappeared from sight. I cocked the gun, shot it and the BB came out. Next I loaded a BB into the spring-loaded magazine on the gun and it dropped all the way down. I released the follower and it went down all the way. I pumped the gun and shot that BB, which came out, as well. So, at least one BB fed through the Benjamin 700 magazine as it should!

I originally thought this would be a one-time report, until I read where people are shooting Marksman BBs with success. So more testing is in store. Now I need those of you with experience to tell me the BB guns you are shooting these giants in.

Speaking of giants, the description says these BBs weigh 5.1 grains. But that’s impossible unless they have air pockets inside them. They are steel spheres that are larger than conventional steel BBs that weigh 5.1 grains. These have to weigh a little more. So, I weighed them. I weighed the same BBs whose diameters I measured. The lightest was 5.6 grains, the next was 5.7 grains and three were 5.9 grains. So, there!

Buyers seem to like the speedloader better than the BBs themselves. It’s a soft rubber affair that looks like you have to cut the tip off — like a bottle of glue — but you don’t. It comes with a hole that’s just large enough to hold the BBs in place until the tip is squeezed. Then it releases the BBs one at a time. 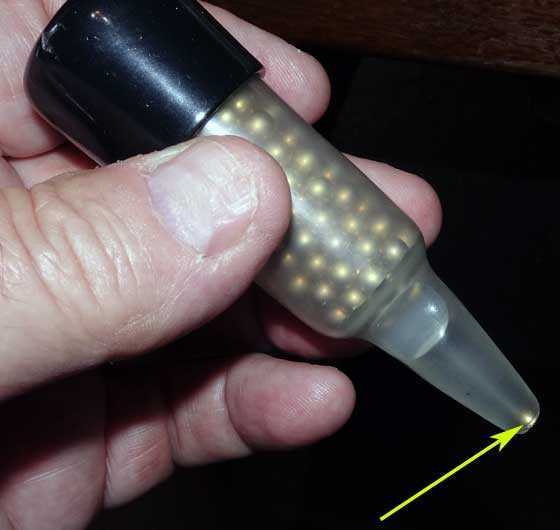 Squeeze the speedloader bottle where my hand is and the BBs pour into the tip. They line up but cannot exit the tip until you squeeze at that point. There’s one BB caught at the tip now (arrow).

You fill the tip by squeezing the bottle behind it. And you fill the speedloader by removing the soft black plastic cover at the rear and pouring BBs in.

Marksman Premium Grade BBs are larger and heavier than conventional steel BBs. That means you have to match them to the gun you plan to shoot. I will do some more testing of this BB for both velocity and accuracy, but I don’t plan to do any destructive testing, so don’t ask me to try them in my Daisy 499.