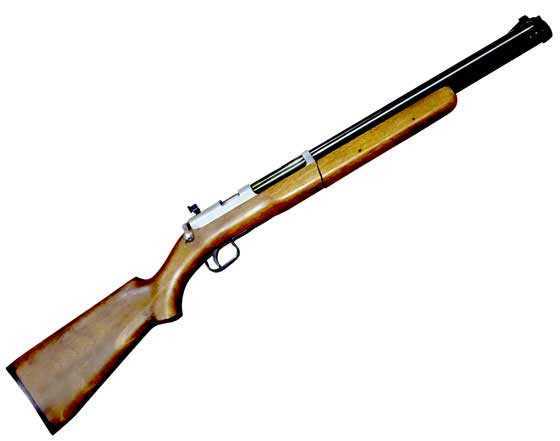 Oh, my! You know you’re getting old when airguns you bought brand-new are the topics of the history section of this blog. Such is the case with my Sheridan Blue Streak. I bought it at a gun store in California in 1978 after returning from Germany. I had wanted one all my life but until I had money of my own I couldn’t afford one. As I recall the price at the time was around $39. A check of the serial number shows my rifle was made in 1977.

E.H. Wackerhagen had a dream of building the finest multi-pump pneumatic air rifle in the world. He had the desire and the money but not the skill to realize his dream. But at some point in the mid 1940s he found and linked up with Robert Kraus whose technical skill completed the equation. Sheridan started making airguns in 1947. Their first product was called the model A and is the airgun we know today as the Supergrade.

The Supergrade was an airgun in which nothing was spared to achieve perfection. Its barrel and pump tube was made of phosphor bronze, a metal with great lubricity. The receiver was an aluminum casting. The stock and pump arm that served as the forearm were both walnut, and the buttstock had a raised cheekpiece like sporting rifles of the period. The valve was an exotic ball bearing sitting in a seat of Hycar — a then-modern synthetic that promised reliability and long service life.

The working prototype rifle was made in .22 caliber, but Wackerhagen felt that the pellets of the day would let it down, so all production guns were built in .20 caliber. Sheridan took the bold step of producing their airgun in a proprietary caliber, probably thinking if they controlled the quality of their ammunition they ensure their rifle’s success. And never forget that a proprietary pellet means only Sheridan can provide it — at least in the beginning. But don’t overlook the flip side of that — if the airgun isn’t standard how many stores will want to stock it? Let me put it this way — what if an electric car had to be charged from a 440 volt connection?

Sales were slow, so in 1948 the Sheridan company revised the design of the model A to produce a model B that had fewer frills but still retained an air of quality. That gun retailed for $35. And customers still stayed away in droves. In fact only half as many model Bs were produced, compared to model As.

By 1949 the handwriting was on the wall and it didn’t say, “MENE, MENE, TEKEL UPHARSIN.” It said, “Either innovate now or get ready for your Going Out Of Business sale.” Kraus and Wackerhagen started with a clean sheet of paper and designed a gun they could manufacture for a lot less than either the model A or B. Phosphor bronze was replaced with red brass and, while walnut remained the stock material, the design that was created minimized wood waste. They ceased asking ,”What’s the best there is?” and started asking, “How can we make…for as little as possible?” The ubiquitous model C that we know as the Blue and Silver Streak was born.

The model C was slimmer, lacked any embellishments on the plain walnut stock, had a cheaper stamped metal adjustable open rear sight to replace the more expensive and fully adjustable peep sight that came on both the model A and B. The massive aluminum cast receiver became a small brass part that was soldered to the tube that held the pump mechanism the firing valve and the hammer with its spring.

What is most interesting is all that remained. The model C weighed the same, was just as accurate and just as powerful. It did everything the model A did; it just wasn’t as impressive. Oh, and it saved the company! That is the airgun we will now look at.

The rifle I am reviewing is from the second major design of the model C. The first design had numerous differences that I won’t get into, but if that’s something you want to learn more about I recommend that you purchase Ron Elbe’s book, Know your Sheridan Rifles and Pistols, second edition, which is available on Amazon.

The biggest feature of the first model C was the thumb safety button. A spring-loaded “button” at the top of the pistol grip had to be pressed down in order for the cocked rifle to fire. It was supposed to operate like the grip safety on an M1911A1, but it was positioned so far from where the thumb wanted to rest that it was clumsy to depress. So shooters held it down in a variety of ways, with the most common being to wedge a toothpick in the slot with the safety depressed and to break it off flush with the stock. In other words no safety — ever! 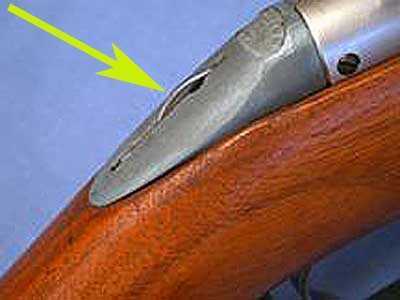 The thumb safety (arrow) has to be depressed or the cocked gun cannot fire.

The rifle I bought in 1978 has what we now call the rocker safety. There are two buttons — one on either side of the pistol grip. Press down on the S on the right side and the rifle is safe. The F on the left makes the rifle ready to fire. These buttons are not spring-loaded and do not have to be held down while shooting. Once a button is pushed the rifle remains in that state until the other button is pushed. The safety can only be applied when the rifle is cocked. 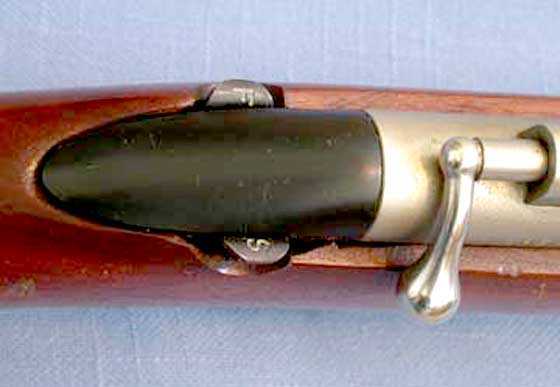 Buttons on either side of the pistol grip determine whether the rifle is safe or ready to fire on the Sheridan C with the rocker safety.

The rocker safety model is considered the most desirable of all the Cs, though a nice example of the thumb safety may command more money due to its age. Rocker safeties were produced from 1963 to 1991. The Benjamin Air Rifle Co. acquired Sheridan in 1977. They moved their Benjamin production from St. Louis (home of Benjamin) to Racine, Wisconsin from 1986 to 1994. In 1991 Benjamin began blending their 392 and 397 rifles with the Sheridan Blue and Silver Streaks and before long it was difficult to distinguish one from another by anything except the caliber. The rocker safety went away, replaced by the single sliding safety lever of the Benjamin rifles.

The Blue Streak and its nickel-plated sibling, the Silver Streak, operate on between 3 and 8 strokes of the movable forearm. I have tested them at a greater number of strokes and confirmed that the power diminishes after 8 strokes, however older guns sometimes gain a little with a ninth stroke. A rifle that’s operating at spec, though, tops out at 8 strokes. At that level you get a medium-weight .20 pellet traveling in the mid- to upper-600 f.p.s. range. Each rifle will be different. My 1978 rifle was old and tired until reader Jeff Cloud rebuilt it in 2016. It now now goes about 609 f.p.s. with the Crosman Premiers that are no longer available in .20 caliber. I say they’re not available, but 14.3-grain Benjamin diabolos are Crosman Premiers in everything but name. Of course I will test the velocity for you in Part 2.

The Blue and Silver Streaks are small, lightweight air rifles that pack more power than their size indicates. Only PCPs have greater power in packages of similar size. The overall length is just over 36.5 inches and the weight of my rifle is an ounce and a fraction under 5 lbs. Yet the pull is a decent 13.25-inches and the barrel is 19-3/8-inches long. That’s adult dimensions in a pint-sized package.

Pump effort starts low and builds into the final couple strokes that are in the 35-lb. region. Beeman used to add up the effort for all of 8 pump strokes to demonstrate how much work shooters had to do. That’s like counting the number of times your bicycle pedals go around for a one-mile trip. In my mind, the figure is without merit. You either will or will not like to pump the gun for each shot — it’s not something that, when measured or put on a spreadsheet, has any real meaning.

I like pumping because it slows the shooting down. It’s relaxing — like shooting a flintlock rifle. But if you like an AR and hi-cap mags, a multi-pump may not be for you.

I will test the Blue Streak in the usual fashion for you, so accuracy will get defined. But I’ll say right now that a Blue Streak is not as accurate as what can be obtained from some of the better spring rifles like the RWS 34.

The rocker safety Blue and Silver Streaks have triggers that were designed before the corporate lawyers were allowed to voice an opinion. They aren’t light, but they are nice for what they are — simple direct-sear trigger mechanisms. And they can be made nicer with simple fixes like lubricating and removing the slop in all the parts.

Besides the thumb safety, the rear sight is the second-quirkiest thing about the Blue Streak. It does adjust in both directions, but the vertical is just a simple screw and the horizontal is a weird arrangement of a push-pull set of opposed screws. Up and down is via a straightforward screw in the leaf. 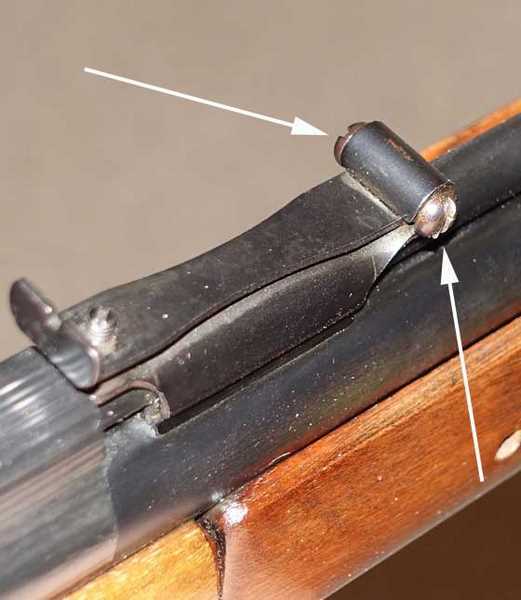 The rear sight moves sideways by loosening a screw on one side and tightening the screw on the other side (arrows). Up and down is via the screw in the rear that’s blurry in this picture.

I’ll have more to say about the design of the airgun in future reports. For now I want to discuss something different.

Soon after Crosman acquired the Benjamin company, who already owned Sheridan, they began marketing airguns with the name Benjamin-Sheridan. This has caused a lot of confusion in the collector market — similar to the “Benjamin Franklin” play on words that Benjamin stamped on some of their airguns. Now there are airgunners who think Sheridan is only half the name of an airgun and that anything Benjamin is also Sheridan. As a result of this, Ron Elbe ends his book in the mid-1980s, with no reference to the guns that were made during the Crosman years. It sort of means that Sheridan didn’t go out with a bang but a whimper. For collectors who are serious about the brand, the Sheridan Blue and Silver Streaks are iconic air rifles.

I have reviewed the Blue Streak in the past, but over the last three years this blog has had such a great influx of new readers that I thought it was time to look at the gun again.