I’m suspending the history reports for a little while to catch up on the new guns. Today we begin looking at the Sig Sauer P365 air pistol. I have been waiting a long time to test this pistol for you — both as a BB pistol in its own right and also as part of a larger report on the use of lookalike air pistols for training.

The 9mm Sig P365 has been my carry gun for more than a year. I was impressed by its small size and big features. For example, from a handgun that’s the size of a .380 ACP this pistol offers 10+1 9mm +P rounds in a standard magazine! When you see how compact it is you immediately think shooting it will sting your hand, but nothing could be further from the truth! The P365 has very low recoil. Even with the +P ammo that it’s rated for, it’s a delight to shoot. 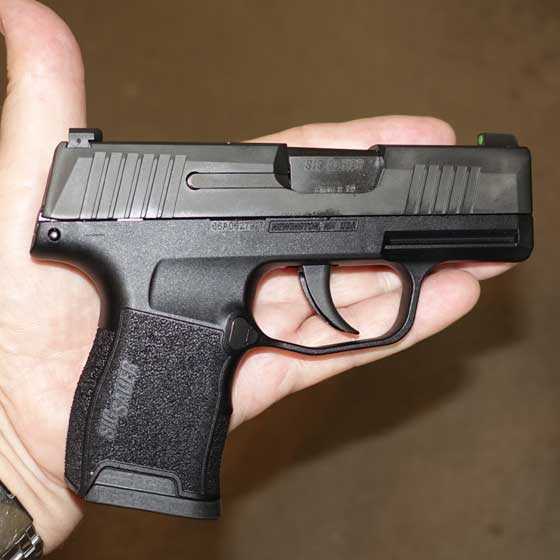 Next, it’s accurate. I reported on this in the blog last year and showed you a young woman who had never shot a handgun before shooting my P365. She handled it with ease. I wondered if she could rack the slide (pull it back to cock the gun and chamber a round), because racking micro pistols is a problem for everyone. She did it readily, as did several other women and men that day. 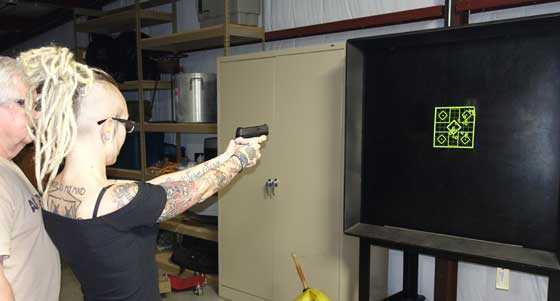 She had never shot a handgun before this. She’s 10 feet from a no-bounceback rubber bullet trap and she’s keeping them all in about one inch!

I switched to the P365 as my primary carry gun in 2018. Since then it has been carried hundreds of hours and shot almost a thousand times. I carry it in an ankle holster if I’m wearing slacks and in a belly band if I will be carrying for several hours or if I’m wearing shorts. The belly band is more comfortable, but does take longer to draw the pistol. Neither holster draws fast but a backup gun isn’t for that.

Let’s switch now and talk about the new BB gun. Sig says it resembles the firearm more than a little and they are right. They also say it weighs the same as the firearm and I was about to take exception to that until I realized that my firearm is loaded with 11 rounds of heavy ammunition. Remove the magazine and ammo and the weight drops to 1 lb. 4 oz, or 20 oz. The BB pistol with a CO2 cartridge installed weighs 14 oz., so the difference is 6 ounces.

The BB magazine holds 12 BBs, which closely resembles the 11 rounds that the firearm carries. There are larger magazines for the firearm that hold up to 15 rounds plus one in the chamber. The BB gun just has the single magazine size at present. It’s the same size as the flush P365 firearm mag that I carry.

The firearm comes with three dot tritium night sights. The BB pistol has three dots but obviously they are just paint and not radioactive. I doubt they adjust in any way. The manual makes no reference to it. The rear notch and front post are well-fitted to each other.

The BB pistol does have full slide blowback, but the slide is small and therefore lightweight. The blowback impulse can be felt, but it’s not as snappy as on some larger BB pistols. Also, remember the ergonomic design of the 365 puts the line of the barrel close to the web of your hand which reduces felt recoil.

This BB pistol is so realistic that I have to confirm I am holding it and not my 9mm firearm that’s always loaded. Don’t want no stupidents! 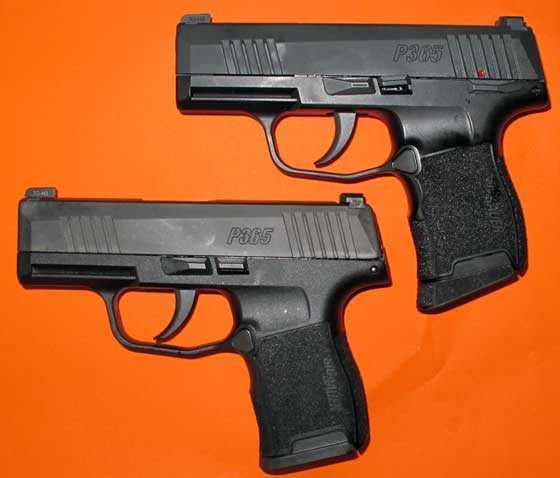 Which is which? The BB pistol is on top.

Both the firearm and BB pistol are single action, only. Of course when the slide comes back it not only loads the next round, it also cocks the striker.

The BB pistol has an ambidextrous safety. My firearm has no safety like most P365s. Sig does make a version of the gun with a manual safety for those people and jurisdictions that demand one. So the BB pistol copies that model.

All the controls work on the BB gun. The slide even stays back after the last BB has been fired. The spring-loaded magazine follower pushes the slide lock up just as it does in a firearm.

One thing reviewers have praised about all other things about the 365 is the ergonomics. They are why the recoil is so gentle, despite the light weight of the pistol. Well, the BB gun copies them perfectly, as well.

Sig has made the magazine follower lock in the down position so you don’t have to hold it as your load. BBs are loaded one at a time through the top of the magazine. A spring-loaded latch has to be depressed to load each BB and this one does have to be held down manually as you load. I found it easy enough to load, but it wasn’t that fast.

The Sig P365 BB pistol is an exciting new addition to the Sig airgun lineup. It’s the kind of air pistol that will make many people buy the firearm to go with it.