This will be a different sort of report. A couple weeks back I was discussing the rough-looking stock of the MP532 Russian target air rifle and I happened to show a photo of a Russian TOZ-35M free pistol. To get that photo I went to Gun Broker where I discovered that there are now hundreds of these Russian free pistols on the market and the price is pretty much in the cellar. I remember lusting after one years ago when they were selling for more than twice what they bring today. And since I’m a sucker for accurate pistols, I bought one.

The TOZ-35M was made at the Tula Arms Plant (also called Tula Arsenal) that was founded in 1712 by Czar Peter 1. Production of the pistol began in 1961. The pistol I bought came with a production certificate that says it was manufactured on November 5, 1988 — 31 years ago tomorrow.

This pistol’s action has a Martini-type dropping breechblock that most modern free pistols incorporate. The front of the block drops down, exposing the breech and giving the shooter a ramp to conveniently load one .22 long rifle cartridge into the chamber. A lever at the bottom of the grip is pushed forward to make this happen. Push the lever a little farther and the action is cocked. When this is done the extractor pulls the fired cartridge, if there is one, out of the chamber. Then pull the lever all the way back and the extractor goes back to the breech and the breechblock rises in the front, sealing the breech for firing.

The action is cocked but the gun will not fire until the trigger is set. That’s done by a separate lever on the left side of the frame. Push it down to set the trigger. It is single-stage — or at least it is so light that I cannot feel a first stage, which is also the case with my Haemmerli 100 free pistol.

Once the trigger is set the pistol is ready to fire. The trigger pull can be set as light as 20 grams, which is 25 times lighter than the 500-gram minimum that a 10-meter target air pistol is allowed to have.

What is free pistol?

Free pistol is a sport of bullseye target shooting where the pistol is relatively free from regulations. The grip cannot completely wrap around the shooter’s hand (but they come pretty close), no optical sights are permitted and it is a one-handed shooting sport. The caliber is .22 long rifle and the distance is 50 meters.

I gave you a small look at free pistol when I tested the Hammerli 100 free pistol three years ago. Well, that gun broke my heart. It won’t chamber most .22 long rifle rounds and the accuracy I got from it (2.5 inches at 50 yards) was mediocre. I’m sure it has a extra-tight chamber for some Olympic ammo that was probably popular in 1955, but since I don’t own a time machine or a DeLorean and a flux capacitor to make one, I can’t get any. That’s another reason this Soviet Sweetie caught my eye. Knowing the Russians are very pragmatic when it comes to competing and winning, I’m believing the TOZ-35M will digest most .22 rounds.

This is the cool part. When you buy one of these in excellent condition (that means brand new) it comes in a fitted case made of Russian birch. 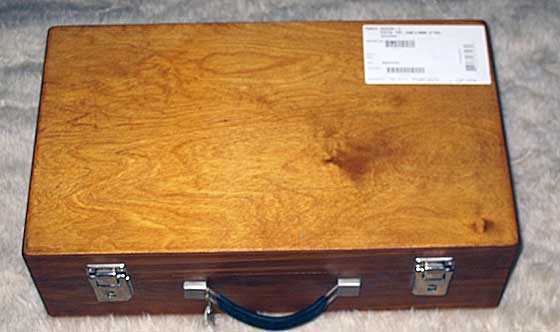 Inside the case is a gun lover’s world of fascination. A shooter’s busy box! 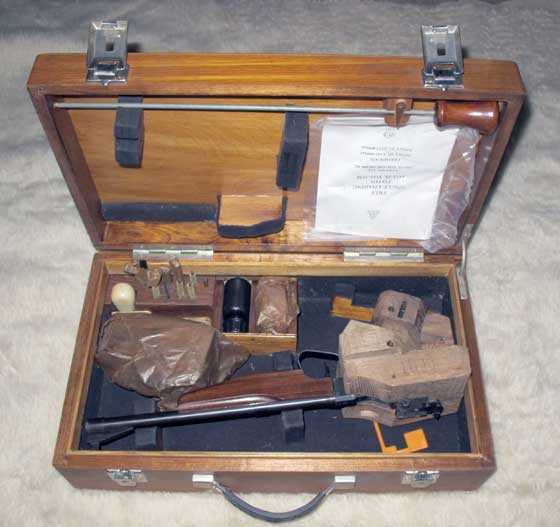 This is what comes with the gun. There’s a manual and certification record, a cleaning rod and separate handle, brushes and mops to clean the barrel, tools for disassembly, an oil bottle and other stuff. 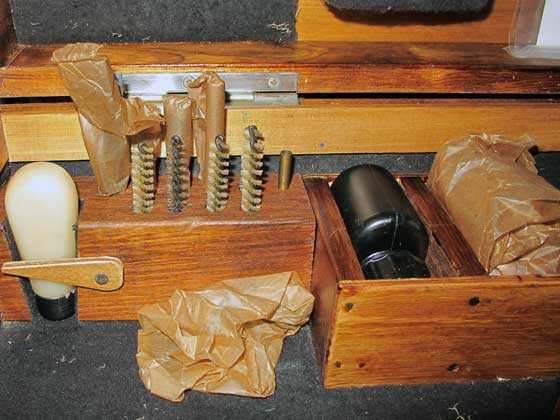 Here you see the white handle for the cleaning rod that’s in the box lid, the black oil bottle on the right, The brushes, cleaning rod parts and pin punches for disassembly. And the lump of waxed paper on the right… 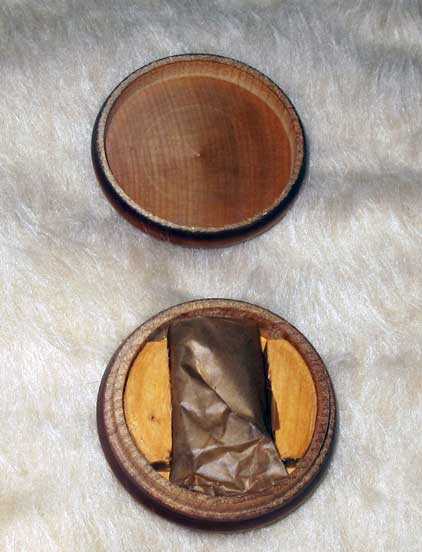 … contains a wooden box that has a small package of waxed paper inside. 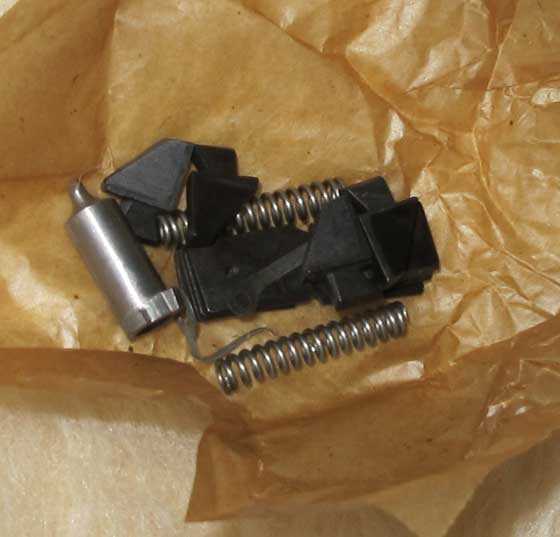 Inside that waxed paper we find a firing pin, a couple springs, a couple front sight inserts, a rear sight insert and perhaps a thingamajig!

You have to appreciate a gun that comes with all this stuff. It’s as if they expect you to shoot the pistol a lot and also to service it for the rest of your life.

Okay — time for the drum roll. The grips are a trifle unfinished as they come to you — as if they were just cut from a fence post. There is a right grip panel, a left grip panel and a palm shelf. But when you get them they look like enough firewood for a long winter’s nap! 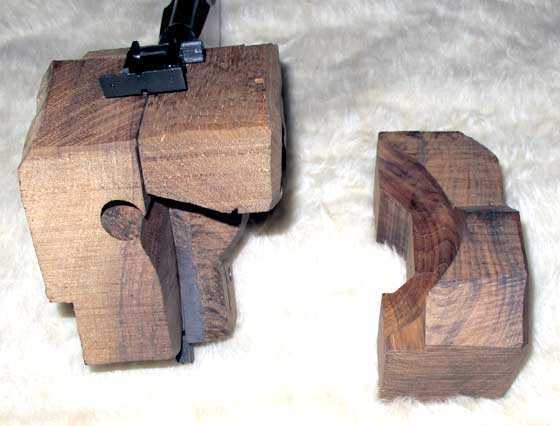 And there is the gun viewed from the rear. The palm shelf is to the right.

One thing stands out when you look at the pistol. Why did they finish the forearm and leave the grips raw? I think a production manager at Tula looked at the gun and figured the forearm is three minutes on a belt sander, followed by a coat of shellac, while the grips are a project for someone serving 20-to-life in the gulag. One thing this almost guarantees is that the grips won’t ever match it.

So, old BB Pelletier, whose woodworking skills approach those of a deceased beaver, has to turn these blocks of timber into grips he can hold. No problem! Just remove everything that doesn’t look like an Olympic free pistol grip. Should be easy.

Oh, I have a secret or two up my sleeve! I would have to — right? Otherwise, as the Gingerbread Man said in Shrek II, I would be up Chocolate Creek without a popsicle stick!

This report may turn out to be the longest unfinished one in the history of this blog. It sure looks like it at this point! Stay tuned, but don’t forget to have a life, too.