Today we look at the accuracy of the Sig P365 BB pistol. So far this gun has been performing as it should. I just hope it will stay on the paper at 5 meters. There are two reasons I say that. First, with guns that have a short barrel, ANY movement of the gun/barrel causes large movements of the shots downrange. Short-barreled handguns are just as accurate as handguns with long barrels — they are just harder to shoot accurately. And second, with a sight radius (distance between the font and rear sight) of just a few inches, ANY amount the sights are off will be exaggerated downrange.

I shot from a UTG Monopod rest at 5 meters, the same as with any BB gun. I debated how best to hold the gun and decided on a two-hand hold with the bottom forward portion of the frame resting on the monopod rubber sling. Except for the first shot, all others were shot that way.

I shot 10-shot groups because the P365 is semiautomatic. That didn’t make it easy, just easi-ER.

Given the shortness of the barrel I was really concerned about missing the BB trap altogether, so I loaded 11 BBs and fired the first shot from ten feet. I used a two-hand hold and my hands were resting on the foot-rail of my bed.

I held a 6 o’clock hold on the black bull and the BB hit the paper 1.7 inches below the center of the bull and 0.9-inches to the left. Given that I am human, I thought that was close enough. So I backed up to 5 meters and fired 10 more times.

The first BBs I shot were the ones Sig provided with the pistol. I got an 11-shot group that measures 3.217-inches between centers. The center of the group is 2.4-inches below the center of the bull and 0.8-inches to the left of center. The first shot from 10 feet is inside the group, though not centered. 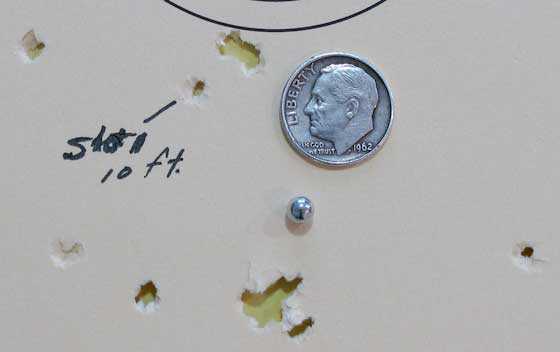 Don’t think this is a bad group! I am dealing with both those issues I mentioned earlier — a short barrel and a short sight radius. Instead, I draw your attention to the group of 4 shots at the bottom, under the BB. This P365 pistol has ULTRA-CRISP sights, front and rear! When I do my very best this is what happens. The problem is, it is difficult to maintain that level of concentration. I actually watched that little hole grow, shot by shot.

What you are seeing in this target is 3 shots plus the first shot up high and then the final 7 shots on the bottom, when I settled down. What this really is, is a (lower) group that is very horizontal — once I got my act together.

I loaded 10 Crosman Black Widow BBs next. I selected them because, of all the premium steel BBs on the market right now, I am having the most consistent success with them. After the first 4 shots, though, I noticed the power was dropping off. The gun was running out of gas. Since I tested it in Part 3 and know that it runs out of gas very quickly at the end of the cartridge, I knew that the first group of SIG BBs was okay. But it was time to change the CO2 cartridge.

I also know that the first 3-4 shots from a new cartridge will have some liquid in them and will be much faster than the 45 shots that follow. Since this is an accuracy test, I blank-fired the gun 5 times with the fresh cartridge before loading 10 more Black Widow BBs.

Because the Sig BBs hit low on the paper with a conventional 6 o’clock hold, I raised the front post above the top of the rear notch and still used a 6 o’clock hold that is the most accurate with this type of sight. If that sounds confusing, let me show you what it looks like. 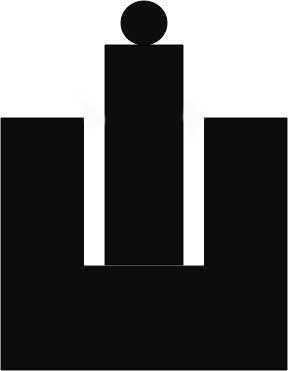 This is the sight picture I used for the next 2 groups.

That looks like a difficult sight picture to maintain, so some really good pistol shooters used to have a gold wire inset across the front post to show them the same amount of elevation on every shot. Elmer Keith was famous for it. On some of his sights there were several wires. 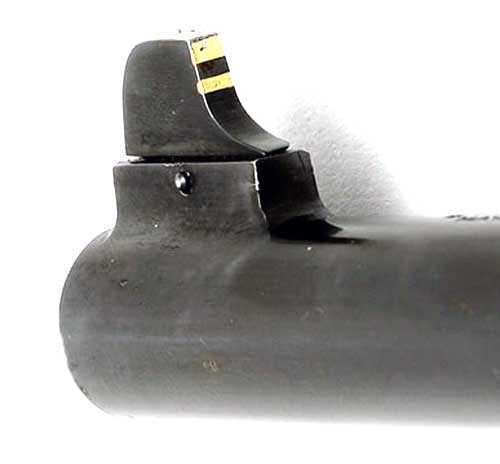 What I’m up against

Now you understand, I hope. Not only do I have to maintain a 6 o’clock hold on the bullseye, I also have to hold the front sight above the top of the rear sight by the same amount each time.

This time with careful aiming I managed to put 10 Crosman Black Widow BBs into 1.96-inches. The group is fairly well centered on the bullseye. I gotta tell you, guys. This group is a combination of me trying real hard and the Black Widow BB being as good as it is. 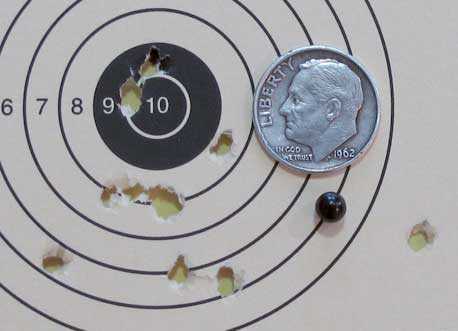 The P365 deserves credit, as well, for it functioned properly all the time. Again I remind you how difficult is is to shoot a short-barreled pistol with accuracy. Yet, I can shoot my Sig P365 9mm handgun with astonishing accuracy. Why?

The P365 BB gun trigger pull is just a little too heavy, at 5 lbs. 12 oz. for me to do all this. The firearm trigger breaks at 5 lbs. 6 oz, but it’s a very crisp pull that can be anticipated. The BB gun trigger feels similar, just not as predictable — yet. I just shoot better with the firearm. I can’t explain it, other than to say the concentration on the sights needed to get the group up into the bullseye is probably what’s throwing me off.

Ten Dust Devils went into 3.356-inches at 5 meters. It’s the largest group of the test. I held the gun with the same care as with the Black Widows, but I may have been tiring out. 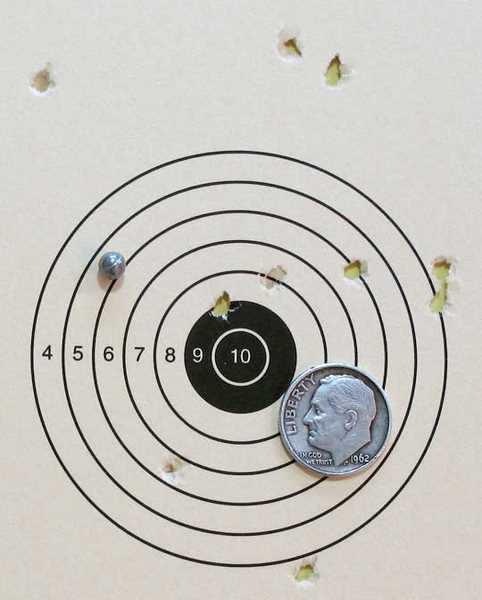 The Sig P365 BB pistol is a remarkable feat of engineering. It is the smallest repeating BB pistol on the market with full blowback. The appearance is an homage to the P365 firearm that is undoubtedly one of the most successful concealed carry arms even built.

If you want realism, this is it! If you want to learn how to use your pistol’s sights, there aren’t many better trainers than this. If feral pop cans have invaded your yard, this’ll get ’em! Just remember — you have to do your part, too.