Today we look at velocity of the Umarex Fusion 2 repeating air rifle again. After Part 2 I considered all the remarks carefully. I wanted to test the rifle’s accuracy but not before knowing how many shots I could count on.

Reader EricfromSC said he used a dime as a spacer between the two CO2 cartridges and it worked. He also mentioned that he had the same magazine feeding issues I encountered and that by holding the rifle level when working the bolt they were resolved. When I test velocity I often cock the rifle with the muzzle up, so this time I was careful to hold it level.

I first dropped about 10 drops of automatic transmission stop leak into the CO2 tube before dropping the first CO2 cartridge in. Then I dropped in a Crosman CO2 cartridge. Since they were the only brand that actually worked in Part 2 I felt I needed to stay with them.

The I dropped in the first cartridge, followed by a dime. I wondered whether the dime would tilt sideways in the tube and mess things up, but it fit like it was made for it. 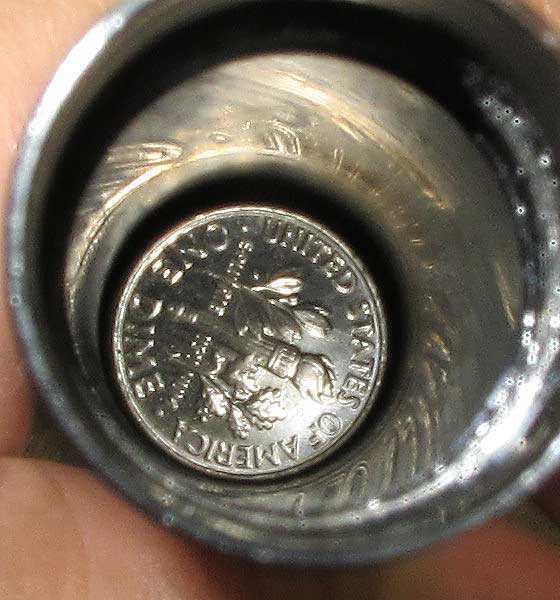 You are looking halfway down into the Fusion’s CO2 tube. The dime is resting on the wide end of the first CO2 cartridge. The fit is perfect.

For those in other countries who don’t have American dime coins, I used a new coin. The diameter is 17.91mm and the thickness is 1.35mm. The dime fits loosely enough that sticking won’t be a problem.

I’m pleased to say the dime trick worked and both CO2 cartridges were pierced quite well. Look at the holes. 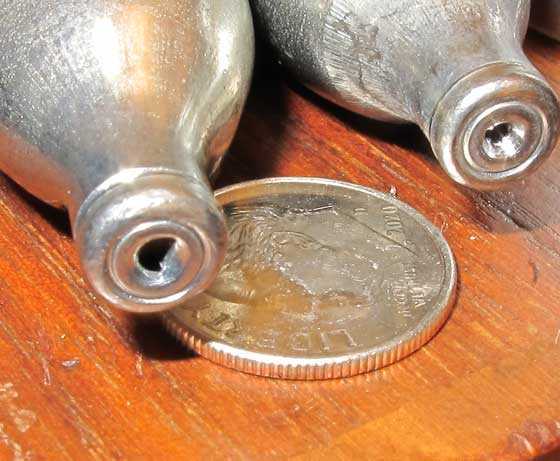 This time both CO2 cartridges were pierced well. The bottom one that had all the trouble before is on the left.

I will show you the fifth string.

I ended the test at this point to keep from sticking a pellet in the barrel. Without a doubt the Fusion 2 uses a LOT of CO2!

Once I held the rifle level as EricfromSC suggested the feeding was perfect. But I will say that every time the bolt passes through the magazine you can see the mag move a little. So watch this!

It occurred to me that since I had removed the CO2 adaptor tube to try the 88-gram cartridge, it was now coming out of the rifle every time I installed new cartridges. Looking at the manual I see that it’s not supposed to do that. So here is my tip. First, screw the adaptor into the rifle as far as you can, then load the two cartridges with the dime between. When you screw the knurled end cap down, leave the relief valve open so you can hear when the lower cartridge is pierced. The knurled end cap will allow you to screw the adaptor down as far into the rifle as it will go. When the hissing starts, screw the relief valve down as far as it will go. The hissing stops right away but keep turning the valve until it stops to pierce the top cartridge fully. I conducted several experiments to determine this was the most reliable way to pierce both cartridges! I do not care for this design!

Now that the rifle is working and I know its quirks I’m ready to move on to accuracy testing. I hasve read so many good things about the accuracy that I’m looking forward to it.

I would like to thank EricfromSC for his comments to Part 2. Without them I don’t think I could do an accuracy test on this rifle.

I have this to say about the Fusion 2. It has some shortcomings that I was able to overcome with help. I wish the magazine was more positive and why can’t I still get the 88-gram CO2 cartridge to pierce. Those things need to be addressed. But if you own one, I hope today’s report helps you. 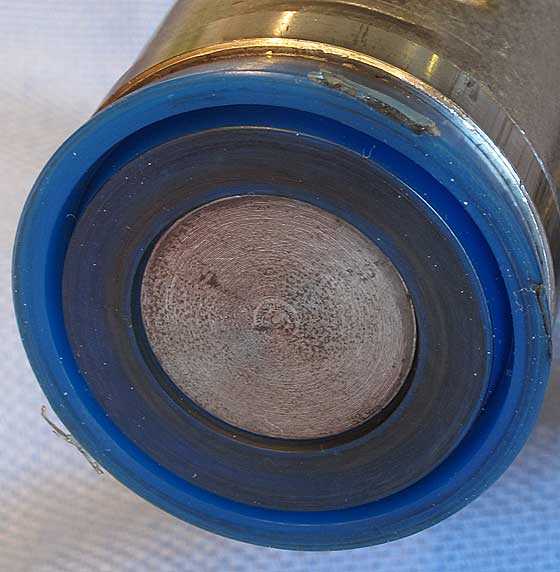