Today we start looking at a new pellet pistol — the Dan Wesson Valor 1911. They call it a 1911, but this pellet pistol is a replica of a 1911A1 if ever I saw one. Let’s begin the report by learning the difference between the two firearm models.

The Colt 1911 pistol was designed by John Moses Browning in — that’s right — 1911. Earlier versions of the gun competed in rigorous Army trials, along with many other pistols from around the world — including the gun we call the German Luger! The 1911 was far superior to all other pistols being tested  in terms of ruggedness and resistance to hostile climates. It was the best of its time with the result that it served the American military from acceptance in 1911 until it was phased out in 1985. I say it was phased out, but that is only for general military use. The pistol continues to be used by special operations forces with the U.S. Marine Corps placing an order for twelve thousand M45A1 pistols (an upgraded M1911A1) in 2014. It turns out that the .45 caliber round is just too good at what it does to pass up for those who really need a sidearm.

The pistol was designed around a new cartridge — the .45 Automatic Colt Pistol (ACP) that the U.S. Army specified because of bad experiences in the Philippines against Moro warriors. Just prior to going into the Philippines the Army had retired its Colt Single Action revolver that fired the .45 Colt cartridge, and substituted the .38 Long Colt cartridge in a double action revolver. That cartridge proved ineffective against the Moros and the Army quickly reissued .45 SAA revolvers to take its place. That experience lead to the requirement for a new .45 caliber cartridge that would work in a semiautomatic pistol — the .45 ACP.

I find it interesting that when lives depend on it, the .45 ACP and the 1911 seem to prevail. Without question modern semiautomatic pistols like the polymer-framed Glock and the ones Sig make are more rugged and reliable over a longer period of time than the all-steel 1911/A1. There have been many tests that proved it. But the 1911 is a design that refuses to go away!

After World War 1 the Army felt some small but important changes needed to be made to 1911. These changes were adopted in 1924 and the new model was designated the M1911A1. Let’s now look at a few of the changes.

Features that were changed 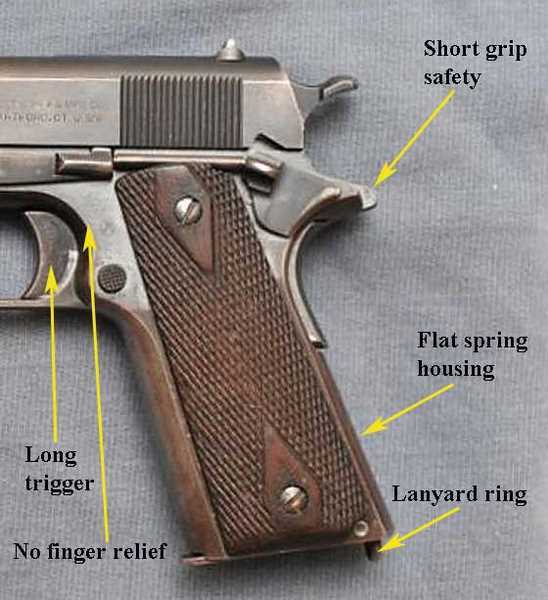 A few of the 1911 features that were changed. 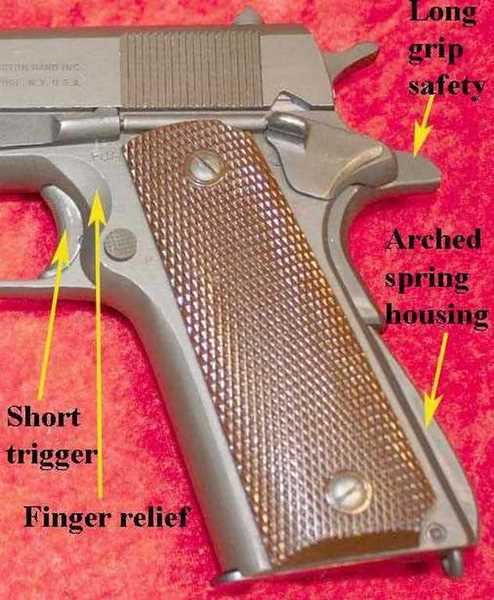 Besides what you see in the pictures, the ejection port was enlarged slightly on the A1 and the sights were made bolder — front and rear. That means a wider notch in the rear and a wider and higher post up front. I note that the 1911A1 that I show has a lanyard ring. Some had them and others didn’t. Maybe when they fell off they weren’t deemed critical because most soldiers besides paratroopers stopped using them. Only half of the pistols in my arms room in the 1970s had them. I’m not saying they shouldn’t all have them — just that some of the ones I saw didn’t.

I had both 1911s and A1s in my arms room. The 1911s in my care had been updated with A1 parts like the longer grip safety, shorter trigger, trigger relief cuts, better sights and the ejection port that was more open. But their serial numbers put them back in the 1911 era.

Enough history, what about this pellet pistol that we are looking at? It’s a 1911A1 in most respects, but it does have the wider beavertail hammer of the earlier 1911. And, because it is a double-action-only air pistol, it has what appears to be the older long trigger. That length is needed to push the hammer back far enough to fire the pistol.

The Valor is a 12-shot pellet repeater. The magazine is unique in that it has a section at the top with two 6-round rotary clips — one on either end. What you do is shoot 6 shots, then drop the mag and rotate the top to the other 6 pellets. So the Valor is a 12-shot repeater with a difference. 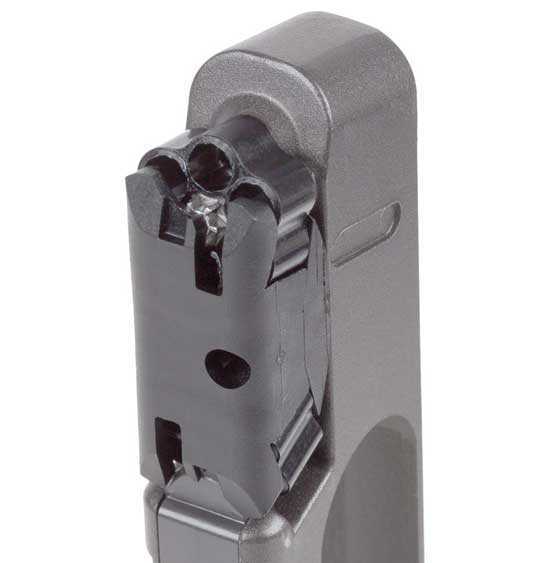 The Valor magazine that holds the CO2 cartridge also has a short section at the top that rotates to present six chambers on either end.

Although the Valor runs on CO2 the slide does not blow back when it fires. Before you go on the warpath, the description says this gives you more shots. According to the specs the pellets are going out at around 330 f.p.s., so if the pistol did blow back we might see 60-75 good shots. This airgun should give even more than that. That will be something I test for you.

The sights are not adjustable and as far as I can remember they are very good copies of 1911A1 sights.  I don’t own a 1911A1 firearm to compare them to. Let’s just hope the pistol shoots close to where those sights look!

This is a licensed Dan Wesson replica. I find it very similar to my 1911 firearm in all respects. The weight is about perfect!

The barrel is rifled, as you would hope. I hope this pistol turns out to be accurate because we can always use another accurate replica pellet gun.

The Valor is out of stock at the present time. The website says they should be in around the 19th of this month. There will be at least three parts to this report, so perhaps it will arrive while I’m still testing it?

At any rate, the Valor looks like another fine replica airgun. We shall see.