Today we start looking at the accuracy of this new Benjamin 397 multi-pump rifle. I say “start” advisedly, because I have a feeling we are going to spend some time with this one. You will too, after you read this report.

Yesterday when I first looked at the FX Radar Pocket Wireless chronograph I figured it would be a problem getting it to work with a multi-pump like the 397. Well it is and so far I am unsuccessful. I figured if I laid it on the shooting bench in front of the rifle and pointed at the target but also underneath the rifle, because the 397 was on a sandbag, it would “look” downrange and see the pellet flying. No such luck. The chrono was in line with the rifle’s barrel (to within about one inch of either side — I couldn’t see it) and about 8 inches below the muzzle. But my smart phone remained quiet for maybe five or six shots.

I then turned the chronograph off and continued shooting the rifle because that was the focus of this report. It seems that if I could pump the rifle and load it, then quickly attach the chrono, but not on top because that’s where the sights are, it could work. I need a way to mount it to the barrel quickly because the current rubber band method is cumbersome unless you only want to get one shot. Maybe attach it to a tripod and shoot over it? This is more of a note to myself, because I intend to keep trying.

I shot the 397 off a sandbag rest with the rifle rested directly on the bag. I shot from 10 meters. The groups were five shots due to the slowness of preparing the pneumatic powerplant. Every shot was on four pumps. The open sights that came on the rifle were used.

I sighted in with the Crosman Premier Light pellet. Shot one landed low on the paper and to the right of the bull. I adjusted it higher (by going the wrong way) and shot two missed the paper altogether. Then I figured out how to adjust the sights and got on target (that’s a pellet hitting inside the bull) in 6 more shots. I left the sights where they were for the remainder of the test. I’m shooting pellets that are both light and heavy and I can accept changes in the point of impact — as long as they land reasonably close to the aim point.

The first target was shot with Crosman Premier Light domed pellets. I checked to make sure the first shot landed in the bull and didn’t look again until all five shots had been fired. When I looked I saw a vertical group, which probably means I’m not getting the elevation right. If I can mount a peep sight on the rifle, that should take care of it.

The group measures 0.673-inches between centers at 10 meters. That’s not too bad.

Next to be tried were five Crosman Premiers Heavy domes. The first shot was a 10 and I got excited. When the shooting was over I saw another vertical group measuring 0.825-inches between centers. It’s nicely centered in the black, side-to-side, but it’s very vertical.

I want to report that the trigger of the test rifle is very repeatable and easy to work with. It is on the heavy side, but the stage two break is clean. That’s what matters the most to me when shooting for accuracy.

Next up were five RWS Meisterkugeln Rifle wadcutters. I knew these would be easy to measure because they cut such clean sharp holes. The first shot was in the black at 11 o’clock so I shot the rest without looking. Five shots made a group that measures 0.97-inches at 10 meters. It looks like the Meisterkugeln Rifle pellet is not for this 397! 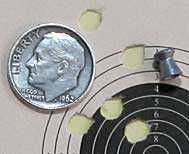 The 397 put five RWS Meisterkugeln Rifle pellets into a 0.97-inch group at 10 meters. This doesn’t look like a good pellet for this 397.

Next to be tried in the Benjamin 397 was the JSB Exact Heavy, a 10.34-grain dome. I saw the first pellet go high and left of the bull, but it was close enough, so I fired four more with out looking. Then I looked and — OH, MY! Five pellets were in 0.261-inches at 10 meters! At the time I had no way of knowing the exact size of the group and I thought it could be worthy of a trime (a group smaller than 0.20-inches between centers). But when I took pictures for the blog I measured it and discovered that it wasn’t quite that small. But — GOLLY!

After seeing this group I changed my test plan. I had planned to shoot a group of RWS Superpoints next, but instead I wanted to see how I did with a second group of these JSBs.

Now that I had a really good pellet it was time to adjust the sights for it. I moved them down and to the right and shot a second group

Could I do it again? I didn’t know. I tried my best but this time five pellets went into 0.568-inches. It’s over twice as large as the last group but it’s still the second-smallest group of this test. It told me I was tiring out, but it also told me this pellet is indeed a great one for this 397. I decided to call it quits for this day.

On the second try the 397 put five JSB Exact Heavys into a group that measures 0.568-inches.

The sight adjustment I made didn’t go quite far enough for this pellet. The sights still need to come a little to the right and a little more down. Well, next time.

What about the paint?

What about the black paint overspray in the muzzle? I think the first group of JSB Heavys puts that concern to rest — however — I did take a Q-Tip loaded with acetone to the muzzle and…

Nothing! As I suspected all along, the paint is not affected by the acetone.  It’s still there and the accuracy we have seen in today’s test proves that it has no affect on accuracy. But I’m not finished testing the 397, so we shall see all that she has to offer. 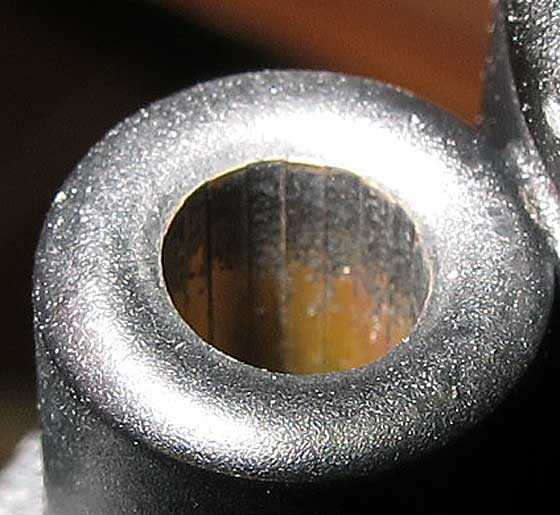 Scrubbing the muzzle for several minutes with a Q-Tip soaked with acetone had no affect on the black paint inside the muzzle. Nor do I think the paint has any affect on the accuracy of the rifle.

I’m spending time on the new Benjamin 397 because it’s a very worthy airgun. It’s also considerably less expensive than it used to be.  The new synthetic stock is disappointing because it doesn’t allow for the use of the sights that the rifle comes with, nor would a peep sight work, if mounted. The high cheekpiece and comb put the shooter’s head too high. But today’s test shows that if the stock comb can be lowered the 397 is everything it is cracked up to be. I have no complaint about using synthetic material for the stock, but I wish whoever designed it had field tested it with knowledgeable airgunners.

The new valve gives more power from fewer pumps, which is great for a multi-pump. In no way does the test rifle come close to the advertised velocity, but the velocity it does reach is right where it needs to be. And it is no harder to pump than any of its predecessors.

Today was round one of accuracy testing for the Benjamin 397. I plan to return many times to see just how accurate this rifle really is!