Friends, BB has never taken a holiday since this blog began in 2005. This year I decided to change that. Sure, I have fun when I’m in Las Vegas for the SHOT Show and stuff like that, but it’s all work, if you know what I mean. I can’t even see any roses, let alone take the time to smell them.

So I cleared it with Pyramyd Air to take 4 holidays each year. I’ll take the 4th of July, Thanksgiving, Christmas and New Year’s day.

Now, the 4th of July is on Sunday this year, so what I’ll do is take the next day off. I will have written a blog, but it won’t be published on that Monday. If a holiday comes on a Saturday, like next Christmas and New Years, I’ll take the Friday before off. I will still monitor the comments on those days, but there won’t be a blog published.

I’ll remind you about this as those days approach. I hope you’ll understand that old BB needs some time off, too.

Today we return to the .22-caliber Seneca Eagle Claw lever action repeater. Several of you readers indicated an interest in this PCP, so today should be enlightening. As you know, this Eagle Claw I’m testing has 11 power settings. I tested the highest setting last time and also a setting that was two clicks down from the highest. That setting actually was slightly faster, on average, than the highest setting — 955 compared to 952 f.p.s.

Today I’ll take the same pellet and test it at the lowest power setting. That will show us how much adjustability there is in the power wheel, as well as how stable the rifle is at that setting.

I also said I would adjust the trigger in today’s report. Let’s do that first. The Eagle Claw trigger was tested as single-stage with a let-off of 3 lbs. 10 ounces in Part Two. It felt a little on the heavy side to me. So I looked in the manual to see what could be done. Yes, I know reading any manual invalidates my man-card for a week.

First, I noted that the trigger is supposed to be two-stage. Maybe adjustment will make that more apparent? Before I did anything I checked the trigger again, and it is indeed a single-stage trigger at this point.

There is but one adjustment screw and it is turned counter-clockwise to lighten the pull. You open the lever and there it is. It proved hard to turn, but I was eventually able to lighten the pull to 3 lbs. 1 ounce. It is pretty crisp. It remains a single-stage trigger, though, with no way of being mistaken for a two-stage.

I filled the rifle to 200 bar (2,900 psi) and tested it with the same H&N Baracuda Match pellets that were used in the high-power test.

I dialed the power wheel down as far as it would go and then shot a string. The first string of Baracuda Match pellets averaged 273 f.p.s. The spread was 6 f.p.s., from 269 to 275 f.p.s. I found that surprising because usually real powerful PCPs don’t play well at their lowest power settings.

I started the string at 200 bar indicated on the onboard pressure gauge. At the end of 10 shots the gauge still read 200 bar.

I will note that the rifle was very quiet, but I don’t consider this setting very realistic. So, for the second string I dialed the power up one click from the bottom.

The average for the second string was 500 f.p.s. The spread ranged from 488 to 503 f.p.s. — a difference of 15 f.p.s. I consider that velocity to be a reasonable low-power setting. At the average velocity the 21.14-grain pellet generated 11.74 foot-pounds. The pressure gauge read 195 bar at the end of this string.

At this power setting the rifle produced 69.2 decibels of sound. That’s a little louder than talking and certainly backyard friendly, unless the neighbors have a telescope trained on your yard. 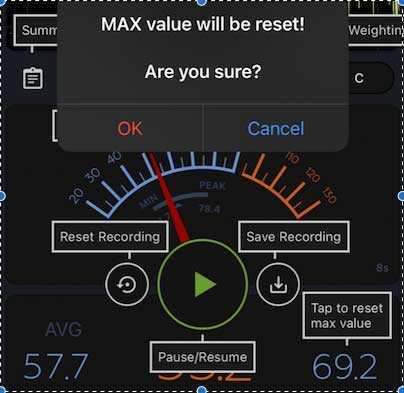 One click up from the bottom is quiet! Sorry about the message that blocks part of the screen. When I picked up my phone to save the image I accidentally hit a button, and there is no going back.

String two at this power setting (which is the third string since we began) averaged 501 f.p.s. The spread ranged from 499 to 504 f.p.s. — a difference of just 5 f.p.s. Like I said, this is great performance for an adjustable precharged rifle at a low power setting. The average energy was 11.70 foot-pounds. The reservoir had 185 bar at the end of this string.

The third string at this power setting produced an average velocity of 507 f.p.s., with a spread from 501 to 509 f.p.s. That’s an 8 f.p.s. difference. The velocity crept up a little this time. The energy averaged 12.07 foot-pounds. At the end of this string the onboard gauge read 180 bar.

It should be obvious that there are a LOT of shots at this power setting. Too many for BB to waste expensive and difficult-to-find pellets to find out. So I now wanted to see what had to be done to get the rifle up to around 800-850 f.p.s. with this same pellet. That is where I would like the rifle to be. I dialed the power wheel up one more notch, which is two notches up from the lowest possible setting.

Power at two clicks up from the bottom

The average velocity for this string was 795 f.p.s. The low was 786 and the high was 804 f.p.s. That nails what I was looking for. At the average velocity the rifle with this pellet produces 29.68 foot-pounds of energy. That is a lot of power, and yet the Eagle Claw skimps on air. It was also louder. I started this string with 175 bar and ended with 165 bar. 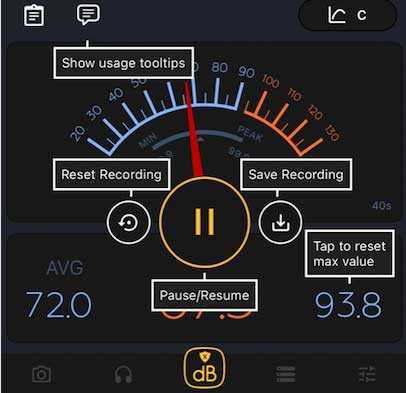 Two clicks up from the bottom is a lot more powerful and also a lot louder. It’s not for a suburban backyard.

What happens when I return to one click up from the bottom? Before I give you the breakdown, let’s look at all the shots

I showed you this entire string so you could see the first two shots. See how the velocity climbs back up to the 490s? What you are seeing is that the Eagle Claw is still shooting close to where it was before on one click up from the bottom. In other words, it’s very stable at this low power setting. That makes me curious.

If two clicks up from the bottom is 795 f.p.s. and two clicks down from the top is in the 960s with the same pellet, what is in-between? Take 4 clicks from 11 (the total possible) and there are 7 clicks remaining that I haven’t examined. At what setting on the power wheel would the Eagle Claw shoot the Baracuda Match at about 875 f.p.s., and about how many shots would you get at that speed?

What I’m saying is I am finding the Seneca Eagle Claw to be a very stable PCP. Hunters could use that to their advantage. I think I need to do at least one more velocity test before we move on.

I’m not giving you a shot count today, but from what I have given you can figure it out fairly close. At the slower setting there are at least 60 good shots, if not 70 or more. At the faster setting we probably have 45-50 good shots.

The .22-caliber Seneca Eagle Claw lever action rifle is a stable PCP that gets lots of shots at high power. You don’t need to go for broke, wasting a lot of air uselessly, to get a lot of powerful hunting shots from this rifle.

I’ve only tested the rifle with a few pellets so far, but the tests I have done have shown me more about its performance than just shooting a bunch of different pellets at different power settings.

If I find a heavier pellet that is also very accurate, this would be the way I would develop a performance chart for the rifle and forget testing with lightweight pellets. In other words, I would determine how many clicks up for low power; how many down for high power and where is a good setting in-between. Speed means very little compared to accuracy.

The trigger is single-stage but it breaks crisply. It’s fine for a hunting rifle. We are learning a lot about this PCP repeater and there is a lot more to come