Today BB finds out how healthy his new/old Hy Score 807 is. This is going to be a good one!

I couldn’t believe that someone online said that, “Adjusting the trigger is notoriously difficult.” It couldn’t be much easier when you know what you’re doing. There are two screws. Loosen the front one (the one farthest from the trigger blade) shown in the pic and then adjust the rear screw. 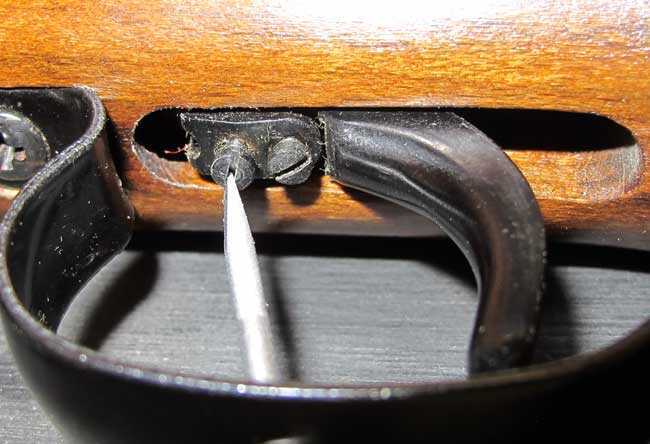 I adjusted the rear screw one turn counter-clockwise and got too much first stage travel with too light a let-off. Back 1/4 turn and it was perfect. Tighten the front screw and I was done in three minutes.

I will say this, stage two on the ball-bearing trigger can be hard to find until the trigger is exercised a couple times. So shoot the gun a couple times or hold onto the barrel while pulling the trigger a couple times and the first stage becomes clearer (more obvious, with a positive stop at stage two). Tighten the front screw when you are satisfied and the trigger should remain where you adjusted it.

The first stage now measures 2 lbs. 2 ounces and the stop at stage two is positive. Stage two breaks at 2 lbs. 5 ounces, so the stage two pull is just a razor-thin three ounces.This is a trigger I can work with.

Today I am going to test velocity with three different pellets, but a funny thing happened during the test. As I shot the rifle became faster and faster. I know why and you will too, if you read along.

While shooting the Falcons I set up the sound meter on my smart phone three feet from the muzzle and recorded a discharge of 100.5 dB. That’s louder than I expected it to be. I think the device is also picking up the sound of the pellet hitting the steel plate in the bullet trap, so I have more work to do on my garage testing area. 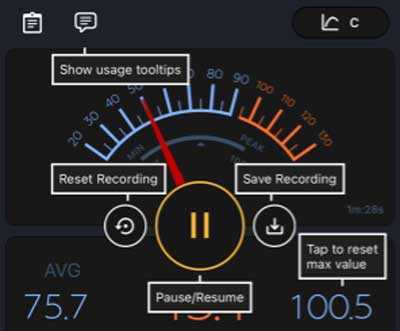 The sound was louder than I expected.

The third and final pellet I tested was the 14-grain RWS Meisterkugeln that should have been the slowest of all. Except it wasn’t. Ten of them averaged 467 f.p.s., with an 18 f.p.s. spread from 458 to 476 f.p.s. They were almost as fast as the 2 grain-lighter Hobbys. Why?

This rifle was speeding up! The more I shot the faster it became. And with a spring piston rifle that has a leather piston seal that means just one thing; the piston seal is becoming more flexible. It’s sealing the compression chamber better.

So, let’s see — when did I oil this rifle’s piston seal? Oh, right. Never! To quote the immortal words of Jar Jar Binks, “My forgot!” And the leather piston seal was warming up as I shot to take care of the situation.

There is only one thing to do. Shoot those first two pellets again.

At the average velocity this rifle with this pellet generates 6.42 foot-pounds.

Falcons the second time around averaged 439 f.p.s. Not quite the same increase as the Hobbys, but the extreme spread was 31 f.p.s. So this is an erratic pellet in this rifle. At the average velocity they generate 5.75 foot-pounds.

I didn’t shoot a second string of Meisterkugeln. I felt the rifle had climbed as high as it was gonna go. At the average velocity they generate 6.87 foot-pounds. The heaviest pellet should not be the most powerful with a vintage spring-piston rifle, but since this one is I think there is still some more warmup/break-in to go. I did shoot one final Hobby that went through the skyscreens at 507 f.p.s., so, wow!

When I shut down the chronograph (it’s in the garage now) and got back in my office I did drop five drops of Crosman Pellgunoil down the muzzle as the rifle stood on its butt. I will be taking this rifle apart, just because we all want me to, but I’m believing that piston seal is pristine.

The rifle has what feels like a fresh mainspring. It cocks with 22 lbs. of effort. Fortunately with this rifle there is no safety, no beartrap and you can uncock it by pulling the trigger and letting the barrel close slowly.

I thought this rifle needed to be tuned. It apparently doesn’t, but I’m going to anyway because I want to. After tuning my other 807 with Krytox and discovering that is doesn’t dampen vibration, I will use Tune in a Tube on this one.

The trigger is now adjusted well, but I will be sure to lubricate the ball bearings to make it as smooth as possible.

There is a lot in store for this Hy Score 807. The rear sight is missing parts but I plan to mount a Diana target peep sight, to see what this old girl can do. It should be fun!