Today you will get an education on scope mounting difficulties and how to sometimes overcome them. As you can see, I linked to all the past reports on the Seneca Eagle Claw because that is what today’s report pertains to.

Something I didn’t show you

Yesterday we finished on a high note that showed the accuracy potential of the Eagle Claw. What I didn’t show was what it took to get those two groups.

You will recall that I was having a lot of trouble finding a scope and mounts that would work on the Eagle Claw. It wasn’t until the third scope I tried that I found one that worked — sort of. The thing I didn’t tell you is that scope was shooting way off to the left of the aim point. I had to dial in practically all of the right adjustment just to get the pellets to hit the paper. Well adjusting to the right relaxes the erector tube spring, just like adjusting the scope higher does. It’s something I didn’t want to do. And even with the scope adjusted to the right almost as far as it will go the pellet wasn’t hitting the aim point. Let me show you.

There are the two groups from yesterday and now you see the whole picture.

When something like this happens my first suspicion is that one or both of the scope mounts (I used two-piece mounts for this scope) isn’t mounted properly to the base on the rifle. But both of these mounts were properly mounted. Something else was wrong.

One of the mounts could be machined incorrectly. I used to see that a lot with cheap rings. But I’ve never seen it with a UTG ring, which these were.

The base on the Eagle Claw could also be machined incorrectly. That would harder to spot because there is nothing to use a reference point.

A way to tell if something is off

This is not a good picture of what I saw, but this is how to tell if a scope is way out of alignment.

I know that picture doesn’t show very much, but there is a picture coming that will show the problem much better.

I knew the scope wasn’t properly mounted, so I set about to mount it correctly. I get so caught up testing airguns that somethings I let things slide and this time they slid too far. Let me show you some detail. 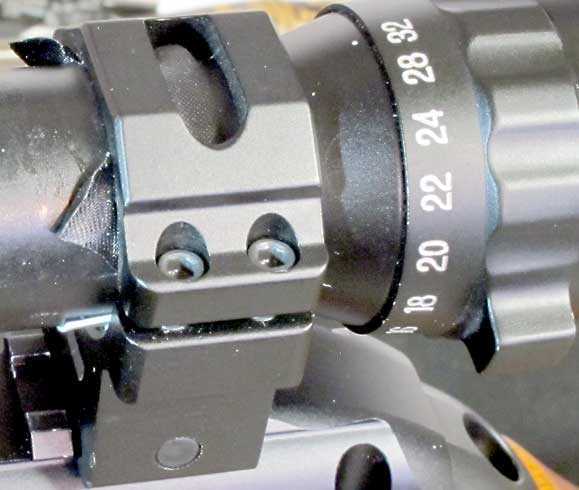 See the stuff coming out of this ring? I need to declutter the ring cap and also to push back the shims so they support the entire scope tube.

The shims that can be seen coming out of the bottom of the rear ring were taken out and restacked. The bottom shim was swapped with the top one, which made both of them stay in place more securly.

All the cap screws in the front ring were loose. So it’s a good thing I decided to do this job correctly. I removed both rings and checked them before installing them again. This was also the right time to clean the outside of the scope tube. I used a soft rag and alcohol for that.

Then I did something that I never do, but because I did this time I discovered something. I usually install the scope in both rings, put on both ring caps and tighten the cap screws in order to spread the stress evenly over the scope tube. This time, for reasons I don’t understand, I installed the rear cap first and was tightening the cap screws when I noticed something strange. The scope was moving sideways in the front ring where there is nothing pushing it. All that push was coming from the rear ring whose cap I was tightening. 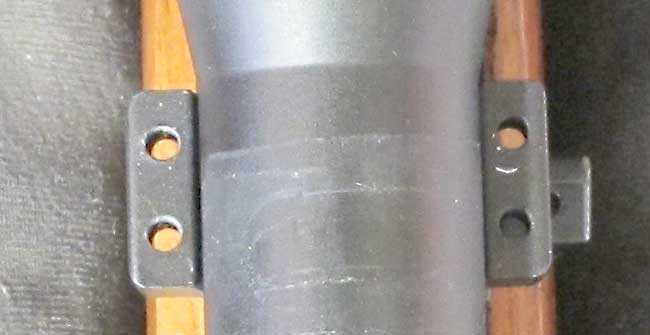 When I tightened the cap on the rear ring the scope moved to the right in the front ring.

Maybe this is a common thing. It’s the first time I have seen it. Because I tighten all the screws for both caps sequentially, maybe I have missed seeing this many times. But now that I have seen it I’m hoping to do something about it.

I decided to swap the rings. When I did and then tightened the rear ring the scope stayed where it’s supposed to. Did that fix the problem? Who knows? There is no guarantee in this business of mounting a scope.

Could it be something else?

Yes. The Eagle Claw has a barrel band that supports the barrel shroud. If that is off-center it can push on the barrel that’s inside. I looked from the muzzle back and couldn’t see that it was off anywhere. But it’s still worth mentioning. If it is off I have no way of correcting it because an outside spanner wrench that I don’t have is required to loosen that band.

This excursion wasn’t supposed to happen but it did. It gave us the chance to look at scope mounting again and that is always beneficial. I guess we find out how this worked next time.

27 thoughts on “Mounting a scope after difficulties”