You were supposed to get an accuracy test of the Seneca Eagle Claw today, but old BB Pelletier blew up — in many ways.

First up was the scope mounting fiasco. I tried and tried mounting scopes to the rifle, but nothing worked. After an hour of messing around with two different scope mounts and swearing (literally!) that the Eagle Claw Picatinney rail wasn’t machined correctly, I measured it with a dial caliper. The lug slots measure exactly 5 mm. Okay — then UTG got it wrong with their cantilever scope rings.

Nope! Five millimeters on the nose. Okay — then the rings HAVE to fit the rail. So I took the scope out of the rings and, sure enough, the rings did fit. BB doesn’t like taking scopes out of rings because not only are they mounted correctly so the crosshairs will be vertical and level when they are mounted, the shims are also in place to offset any droopiness. Because BB has learned that rifle barrels are ALWAYS droopy.

So, I’m tightening the rings and — oh, oh! The front ring now impacts on the rotary magazine. Okay, there was an hour wasted on a scope I can’t use. Where is my 3-12X32 Bug Buster?

The Bug Buster went on with no problem. Among other things like its clarity, I like my Bug Buster because it almost always fits a rifle! Hurrah I am 90 minutes into the test and I have a scope on the rifle. I should be photographing and measuring groups by now, but I haven’t fired the first shot. 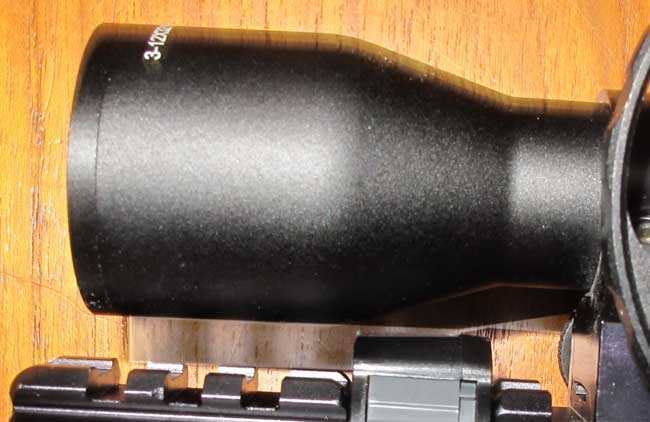 But I couldn’t get the Bug Buster sighted in! I shot from 12 feet and the pellet hit low. But if I back up to 10 meters the pellet will rise by the amount of height the scope is above the bore.

BB is starting to fuss and fume. Two hours of his test time is blown and not one effective shot does he have to show for it. It takes longer to write the report than it does to test the rifle and I am running out of time.

Old BB was runnin’ and gunnin’ today. Mostly to no avail.

But I smiled and got on with it. The third scope was and still is an older UTG 8-32X56. Once again I tried to sight in. At 12 feet I was hitting where I needed to, to be on at 25 yards. But when I backed up that far I never hit the target. In fact I wasn’t even sure that pellets were coming out of the muzzle. 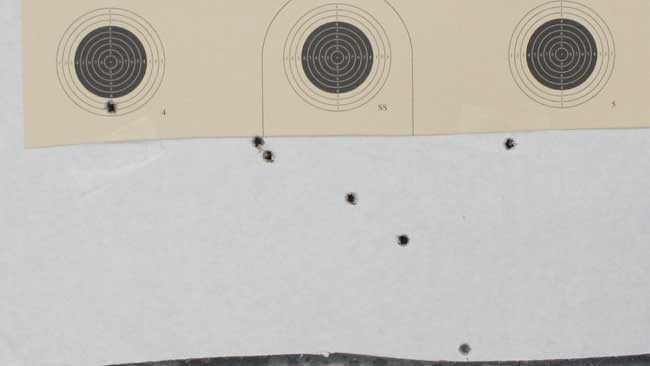 No matter what BB did the pellets kept moving away from the targets.

I reloaded the magazine and noticed that one pellet from before had fallen into the breech under the bolt. Oh, NO!

At this point almost three hours had passed without BB getting off a single decent  shot. And it suddenly dawned on me what was wrong.

I had been loading the rotary magazine from the back, the way most rotary mags are loaded, and at this point I remembered that the Eagle Claw mag might just load backwards. So I went to the older reports and there it was in Part 2. Under the heading Loading the magazine (how ironic!) it says:

“The Eagle Claw magazine is loaded from the front, pellet skirt first. I have to admit that I forgot that since the last time I tested the rifle. I loaded it from the back the first time. You can do that but the magazine doesn’t work right if you do. The rotating cylinder doesn’t rotate when the mag is loaded from the rear. I shot several blank shots before I figured that out. You can manually advance the mag, but it won’t go on its own if loaded incorrectly. That said, it’s no trouble to load it the way they say to.

If you load the mag correctly the pellet has to be pushed deep inside the cylinder. And it does go deep! That means it can accept pellets of all the heavier weights.

Once I loaded the magazine correctly all problems went away and it was 100 percent reliable. I will also remark that the lever does operate smoothly, once you get used to it.”

Here I had spent all morning fussing with the rifle when all that was wrong was how I was loading the pellets into the magazine. Okay, today won’t be a formal accuracy test, but you do get at least one group! Maybe two. These were shot with JSB Exact Jumbo Heavy pellets. 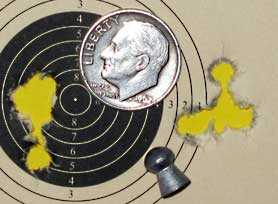 Why not 10 shots in the groups?

In today’s test I was also using the power adjustment wheel that I discussed in Part 5. I set it at 3 clicks from the bottom and then forgot to dial it up as the shooting progressed. By the time I shot these two groups, several shots were weaker and missed the target altogether. For the group on the right I figured out what was happening and dialed the power all the way up. That’s the way I will shoot the Eagle Claw from now on. I’ll dial in full power, shoot 20 shots and refill.

Well, that was a peak behind the curtain at what sometimes happens in my life. I normally don’t tell you about these things, but today was a comedy of errors and I wanted to share it with you.

I will give the Eagle Claw a real accuracy test, and after seeing what I saw at the end of today, I think we are in store for a surprise. 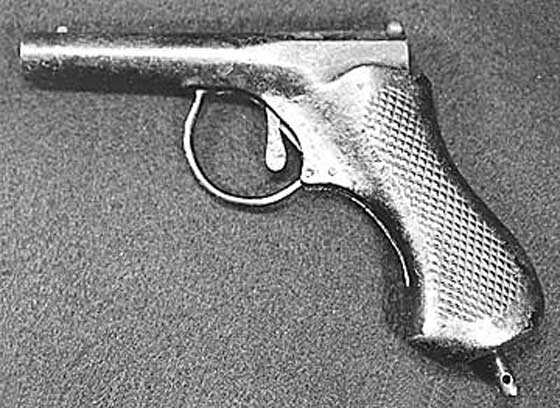