Well, well. The day you waited for has finally arrived. Today I replace the 25mm piston seal in the HW 50S with a 26mm seal. But first — don’tcha wanna know how that 25mm seal got into the kit?

Tom Gore called me about a different subject right after I finished changing the seals in this rifle, and we talked about that. He told me that the older HW 50S rifles had a 25mm compression tube, which many of us knew. So he got requests for a PG3 SHO (and later the PG4) with a 25mm seal. He made up some kits in response to those requests. That was what I got. If anything his labeling needs to be sorted out, but the 25mm seal was also correct for the 50S. Just not for mine. Now let’s look at the seal replacement.

Since the piston has to come out to replace the seal, this will be a full disassembly. I won’t go into all of it, because I showed you that in Part 5. However there were some questions that I hope to answer today.

There were a couple questions about the safety. First, what does it look like in the rifle after the Rekord trigger has been removed? And next, what do you do with the safety when the trigger goes back in the rifle? 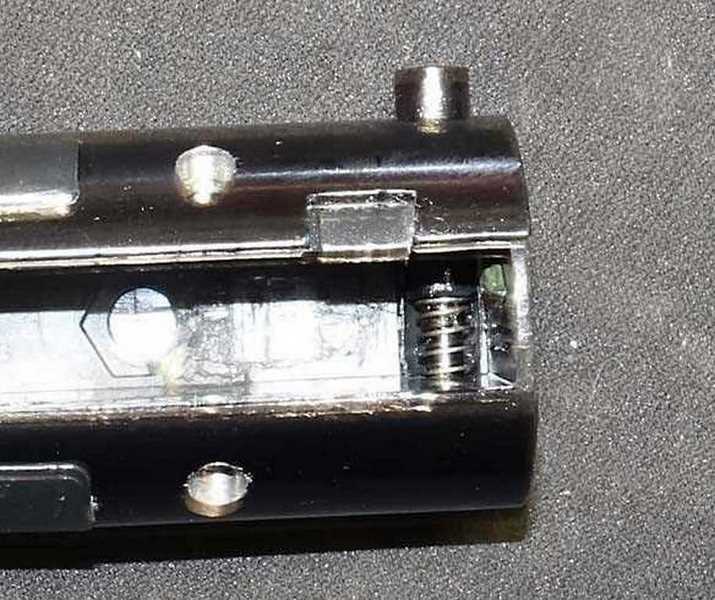 The Rekord trigger has been removed. The safety is a spring-loaded cross pin that sits in the end cap.

My rifle is so new that I had to drift the safety out with a thin pin punch. In most Weihrauch rifles they just fall out on their own. When you put the Rekord back into the rifle you have to press in on the large side of the safety (which presses against the coiled spring you see here) to get clearance for the Rekord pin holes to align. And remember, it’s easier to align the pin holes if you cock the trigger before installing it. Once one trigger pin is in (always the rear pin, in my case) you can let go of the safety and the trigger will hold it.

Before the end cap comes out the four tabs have to be removed. You will remember that the first time they were in there very tight and took a long time to come out. This time they were much looser and came out fairly easily. I did have to put a small amount of tension on the end cap to remove one of them, but I got the job done in just a few minutes rather than spending much longer.

Weihrauch rifles are so easy to disassemble, and the pivot bolt is a snap to remove. However, there is one trick. If you break the barrel open, the detent doesn’t put tension on the bolt and once the bolt is loose it comes out right away. 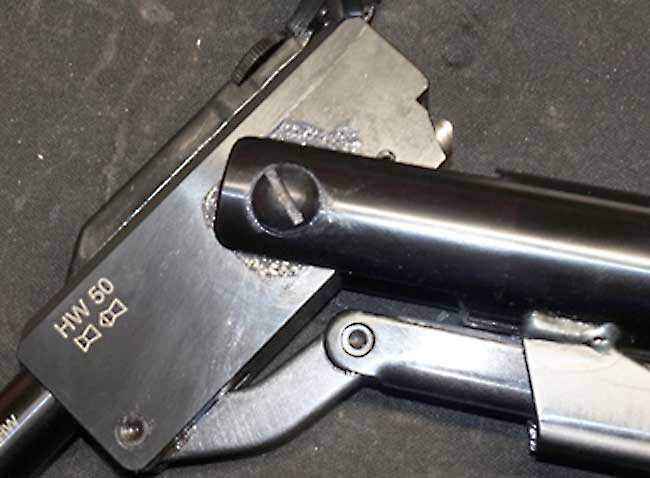 To remove the pivot bolt it helps to break the barrel open like this.

One more thing about the barrel

Remember that trick I told you of using grease to hold the thin pivot washers in place on the base block? Well if you are careful when separating the barrel from the fork of the spring tube, they stay in place. I didn’t have to do anything to the washers after installing the newly sealed piston except a slight alignment before the pivot bolt dropped through the base block.

Let’s now look at the new 26mm piston seal. There is a way to tell it from the 25mm seal. The 25mm seal has a groove cut into its top face and the 26mm seal does not. 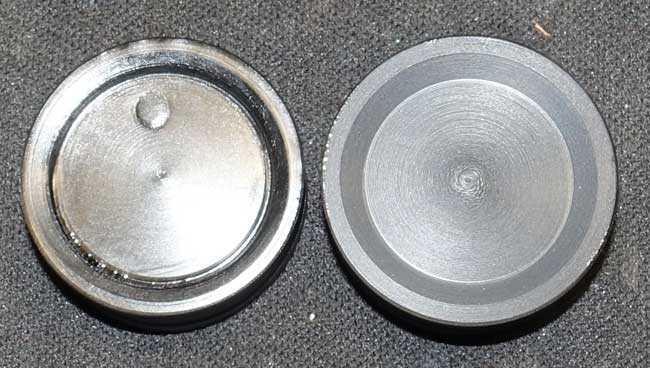 The 25mm piston seal on the left has a groove cut into its face. The 26mm seal has no groove. You can also see the imprint of the air transfer port on the 25mm seal.

At least one reader asked me whether the air transfer port left an impression on the 25mm piston seal. As you can see, it did. 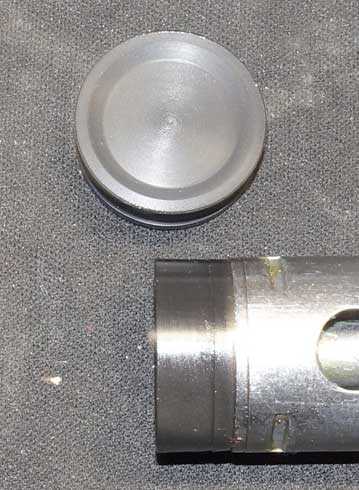 Here the old 25mm seal is still on the piston. You can see that it slightly smaller than the body of the piston.

In my experience the Vortek seals can be hard to remove when they are new. It’s one of those jobs that takes three hands. But this time I found a trick. After squeezing the seal with pliers to get an opening under the seal for a screwdriver blade (which was the job that took three hands), I put the seal (with the piston still attached) into a small vise with smooth jaws. I was able to squeeze the old seal enough to get a screwdriver blade into where it joins the piston. I did this twice before the seal came off. You may not see a slot for the screwdriver blade, but as long as the seal is under pressure you will be able to slip the blade under.

Putting the new seal on is a matter of positioning it on top of the piston and then pressing down on the piston hard until the seal slips over the edge of the piston and grabs. I use a flat door jamb and press against it with all my weight. The seal is tough, but with enough force it can be overcome. 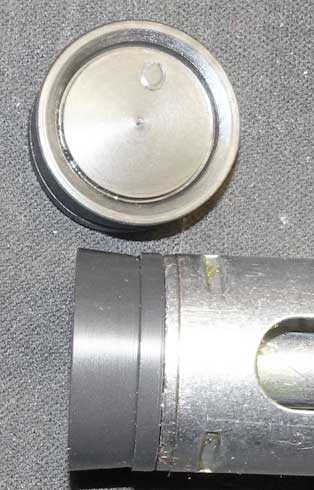 The new seal is on the piston and you can see that it’s larger than the piston. 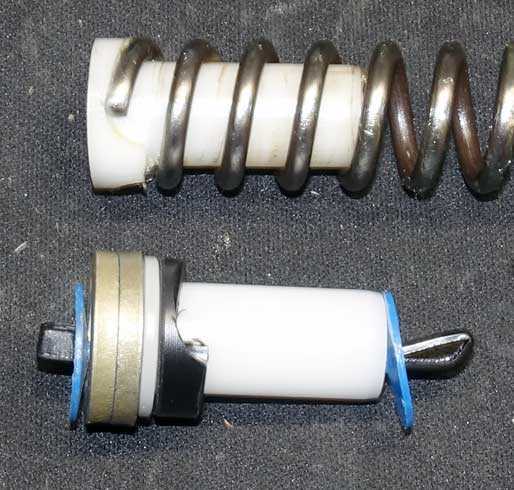 The older forward spring guide is at the top. The new PG4 assembly (held together by a plastic cotter pin and two blue plastic washers that aren’t part of the assembly) consists of a white guide, a black rotation ring that captures the end of the mainspring and two thick steel washers. 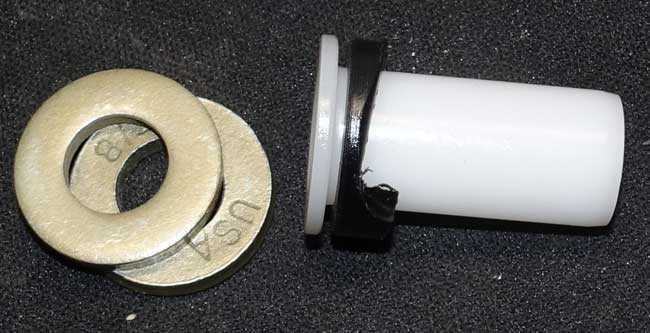 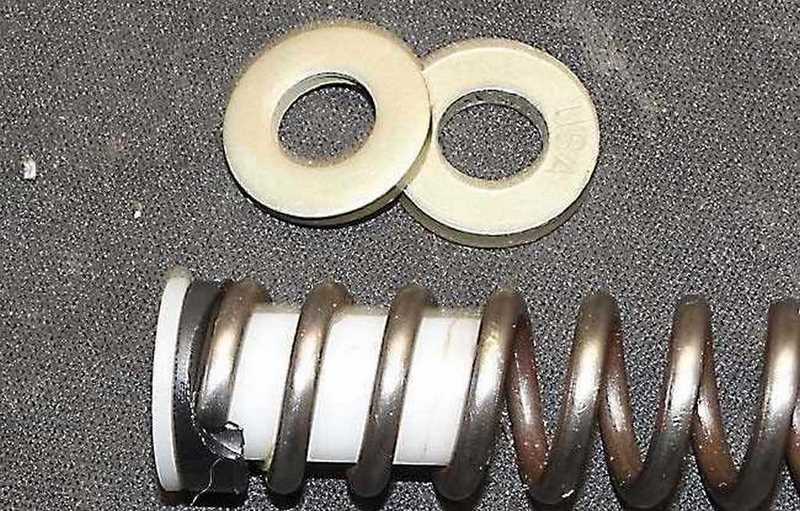 The new forward spring guide is in the mainspring, ready for installation.

The washers are to allow the user to tune his rifle. Tom Gore tells me that with both washers installed (ahead of the spring guide) the rifle will approach 12 foot-pounds. I decided to install one of the two washers with the new guide.

Getting the old guide off the mainspring was a bit of a chore, because like all the other parts in this kit there is literally no tolerance. I use a flat-bladed screwdriver through the mainspring coils to lever the guide forward. Once it has moved a little you can grab it and pull it out. The new white guide with the black rotation ring goes into the spring. I lubed it with grease and, although it didn’t slip right in, it did go into the spring in less than a minute.

I had to relubricate the mainspring and rear spring guide, because at this point most of the grease I had put there last time had worn off through handling. I decided to use one of the two washers with the new forward spring guide for no particular reason, so I lubed it with grease and put it on the flat end of the new spring guide, then I slid the assembly into the gun and prepared to close the spring tube.

The rest of the assembly went smoothly and the rifle was back in its stock and ready to roll. Naturally I fired the rifle several times to make sure the new seal was doing its job.

This completes the swapping of the piston seals. I’m now ready to test the rifle’s velocity again. Tomorrow.