The problem
Mag cover
What to do?
Swiss files
Remove the clear cover
Now to test
Discussion
Summary

Today I fix the rotary magazine on the Air Venturi Avenger Bullpup. What a timely report! I had to use several of the tools that I showed in the two tool reports, plus one that several readers recommended but I chose to ignore. A good Friday report!

I was informed by a reader that a Benjamin Marauder rotary magazine would fit the Avenger. No — it won’t Let me show you why.

And there is why a Benjamin Marauder magazine (on the right) won’t fit into an Avenger Bullpup receiver. Both the black plastic body AND the clear plastic cover are too thick!

This is why you shouldn’t offer advice when you think something might work but don’t know. I had planned to shoot a group from the magazine today, but this discovery set me on a different path.

Okay, I have to use the Avenger’s magazine. Why doesn’t it feed? A check of the cover where the bolt passes through to push the pellet into the breech revealed why. Tool number one — a jeweler’s loupe. 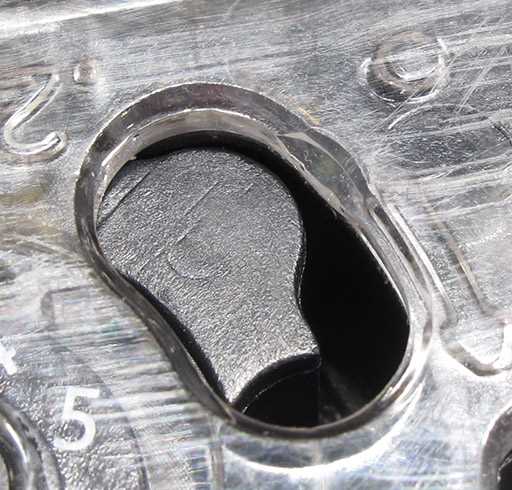 And there is the reason the mag doesn’t work! With a magnifier you can see the fault clearly.

Well, some material must be removed from the mag cover at the slot the bolt passes through. Not a lot, because that dent has been enlarged many times in the picture and there are also angles in the plastic. Whatever will I do?

I thought to use my Dremel tool, but it’s too aggressive for small work like this. I think I will use my Swiss files! Tool number two!

Yes, I own several dozen Swiss files. I was not sure they were needed for a basic tool set, but guys — you got me! I also own several diamond files and one of them is also very small for work like this.

That’s a diamond file on top and two small Swiss files below. I used the top one and the bottom one because I didn’t find the middle one until I took this picture.

I took the cover off the mag. Then I put on the magnifying hood. That’s tool number three. I used the diamond file to open the hole in the cover where the dent was — but only that far. Then I used the half-round Swiss file to even the slot so the hole wasn’t a hole anymore. A Swiss file is a very small metal file that works like any other metal file. The only difference is its small size. 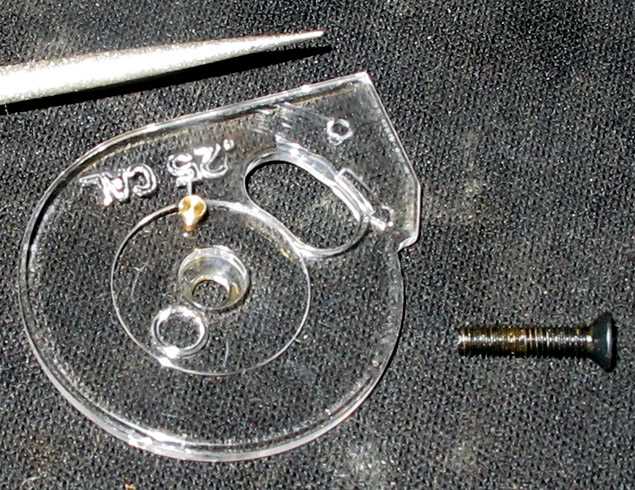 Let’s get to work on that cover. I’ll start with the diamond file.

I worked carefully and slowly. Even so I was filing plastic and the work went fast. Once the dent was opened all the way I relieved both sides of the slot so it wasn’t just a small hole, or the edge of one. I used the Swiss half-round file for that. 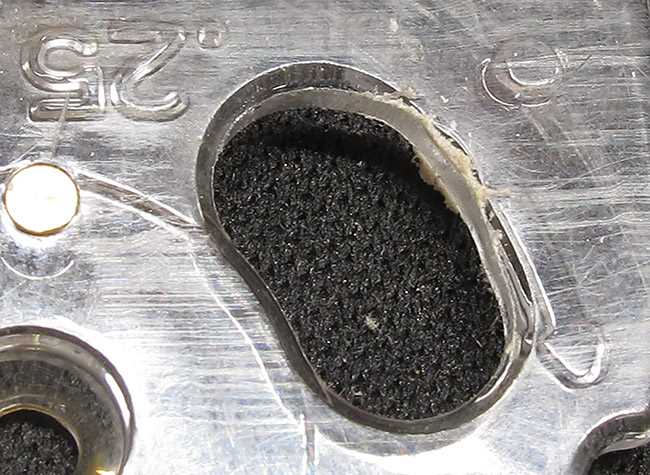 After the work you can see where the dent was, but only just. That’s the way I want to leave it.

I put the cover back on the magazine. Then I loaded a single pellet and worked the sidelever. It fed easily with slight resistance. I like that because the bolt will wear that slot open as the mag is used.

Next I loaded eight .25 caliber pellets into the magazine and installed it in the receiver. All eight fed and the last few fed without resistance. Job done!

Okay, BB agrees that small files are good tools for every airgunner to have. But here is my warning — KEEPA YOU HANDS OFFA THE SEAR SURFACES! Most sears in airguns today are made from low carbon steel that can only be case-hardened. Case-hardening is a thin shell of hardness that a file can break through. After that you don’t have a real sear any longer; you have a clutch. And it’s one that can slip!

Number two, and I say this to myself as well as to all you readers — don’t guess what works. If you know for certain that something will interchange with something else, fine — we all learned something. If you don’t know please say that you THINK it might work.

And finally, for all of you who think that because I felt a little resistance when the bolt went forward that the pellet will be damaged and somehow less accurate, let’s remember that the pellet doesn’t have to pass through the magazine cover after it is first loaded. It remains inside the black plastic magazine body until the bolt pushes it into the breech of the barrel. So I don’t anticipate any less accuracy from this repaired magazine. I will say that in past tests of other airguns I have seen them more accurate when loaded singly than from a magazine of any kind, but that is the only difference I anticipate.

Short report. Took some time to do the work and take the pictures. But it is an excellent followup to our reports on the tools an airgunner needs — and why. Readers Alex2no, Peter and Michael, follow my lead at your own risk.

Next up will be an accuracy test using the repaired magazine. We can compare that to the sandbag rest test and to the best group from the first bipod test. I suppose I will have to shoot both from a bipod and from a sandbag, just to make it all as fair as possible.