Today we look at the materials our airguns are made from and how they have changed and are changing. The inspiration for this report came from the Texas airgun show that was held a week ago, from my personal encounters with ukuleles and from yesterday’s report on the Gamo Arrow.

I remember talking to big bore airgun maker, Dennis Quackenbush, several years ago about his rifles. He told me he made them from wood and steel in the traditional manner. And just because he did that he had a following. Dennis was always backordered. He would open “the list” for a certain number of big bore rifles and toward the end of his career it would be filled in a couple hours. Producing that batch then took him the better part of the next year to complete.

At the Texas airgun show last week I heard many people comment on such-and-such an airgun being made of real wood and steel. It was said in such a way as to proclaim that the materials the gun was made of were as important as how well it functioned. Remember the FWB 124? Real wood and steel!

But what about the more recent Sig ASP20? Not wood and steel, at least not in all cases. The ASP20 could be bought with a synthetic stock. But, because of the high cost of the molds to make such a stock, the first rifles hit the street with wood stocks. Sig bent over backwards to make those stocks look like they were made of synthetics. The why of it is beyond me, but it seems to be a part of the Sig view on the future of guns, or at least how they want to be known.

I will now shift gears. In the world of ukuleles there is a synthetic known as high pressure laminate or HPL. Many retailers will tell you that HPL is a thin plywood material, but the truth is there is no wood in it whatsoever. It’s sheets of paper held together by resin! Many kitchens have it on their counters, because the product known as Formica is one form of it. Many decades ago that material was brought out as a replacement for the mineral mica, hence the name.

Why on earth would anyone want a musical instrument made of paper? Well, let’s see. There are several reasons. 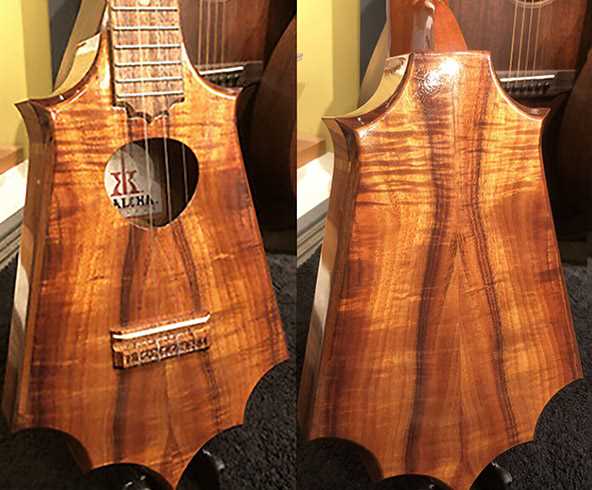 This custom bookmatched koa Hawaiian ukulele is selling for just under $3,000. 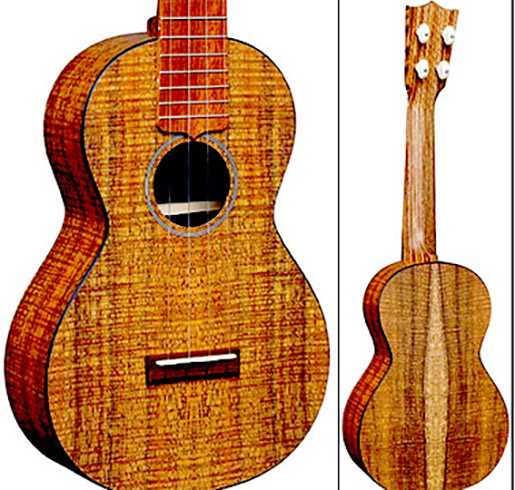 This factory-made ukulele is made of HPL made to look like koa and retails for $300.

Yes, I will admit that in my example the real wood uke I’ve shown does look better, but there is a deal. The deal is, the HPL uke doesn’t have a thin laminate of wood on top for show. That’s just a picture of koa wood! The top layer of paper has a picture of koa wood printed on the paper and if you look closely when you have the instrument in your hands you can see the dots in the photograph. Maybe that’s why it doesn’t appear more flamboyant, because every uke with that picture would look exactly the same.

Resistance to weather — An all-wood instrument should be stored at between 72 to 77 degrees F and keep the wood at 45 – 55 percent humidity, according to C.F. Martin & company. But in Hawaii, where some of the best guitars and ukes are made, the humidity seldom gets as low as 50 percent. So the instruments are stored carefully when not in use.

An HPL instrument can be stored in a hot car or taken to the beach and sit in a tent for days with no problem, because the resin in the material makes it highly resistant to moisture. It’s also far stronger than real wood, plus much lighter.

In 1947 the Sheridan company brought out their model A that we call the Supergrade today. It retailed for $56.50 at a time when a Winchester slide action model 61 rimfire (a very desirable firearm) sold for less than $50. The barrel in that Sheridan rifle was made from phosphor bronze. Why? Was it better? The two men who created the Model A rifle felt it was. They developed several test jigs to test certain things and they found they could get the highest velocity from a phosphor bronze barrel. In fact, when they switched to the Blue Streak and Silver Streak rifles that followed in 1949, they made those barrels from brass. It was better than steel but not as good as phosphor bronze. And these two softer materials are also easier to rifle — not a small concern when discussing production.

Steel is a good material for rifle barrels. It’s tough and can withstand lots of shots with minimal wear. It resists the heat of combustion when gunpowder burns. But multi-pump airguns don’t burn powder.

Multi-pump airguns exhaust high-pressure air to push the pellet, and when high-pressure air decompresses rapidly, moisture droplets form. Steel rusts in the presence of moisture — phosphor bronze and brass don’t. Do you get it? The right materials may not always be the historically finest materials, but that’s because when looking at history you are considering something that isn’t exactly the same as the thing you are now contemplating. Said simply — airguns are not firearms.

I’m about to tread on some toes. I don’t mean to, but I can’t avoid it. The HW 75 single stroke pneumatic air pistol that was also formerly sold as the Beeman P2 is a delightfully accurate airgun with a wonderful trigger. It retails for about $500 and is made from real wood and metal. 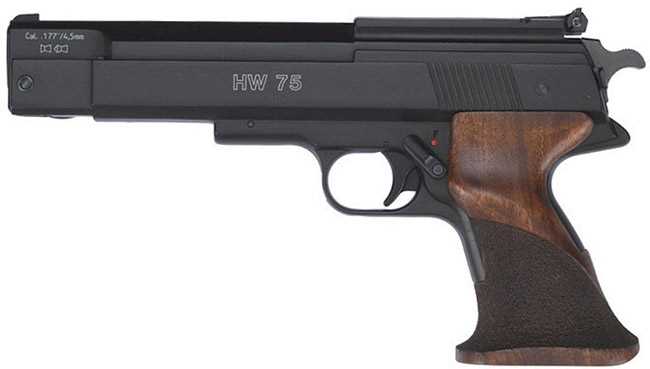 But there is another single stroke that stirred the pot. When the Beeman P3 single stroke pneumatic pistol came out people hated it! They said it was plastic, because that’s mostly what you see on the outside. But the P3 is delightfully accurate and has a wonderful trigger. And it retails for just over half as much as the HW 75. 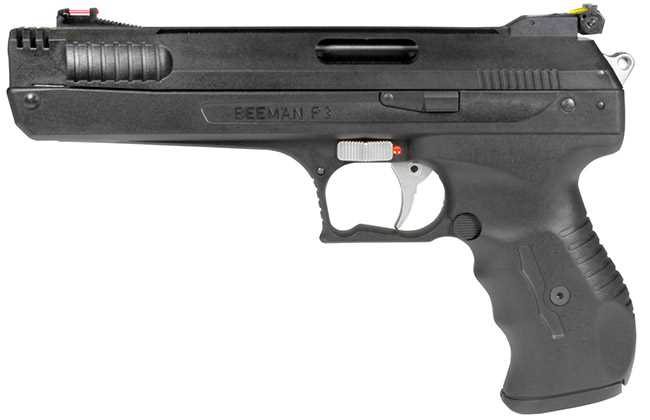 And then came the Beeman P17. It looks very much like a Beeman P3 and functions similarly, yet retails for less than one-sixth of what the P3 sells for. 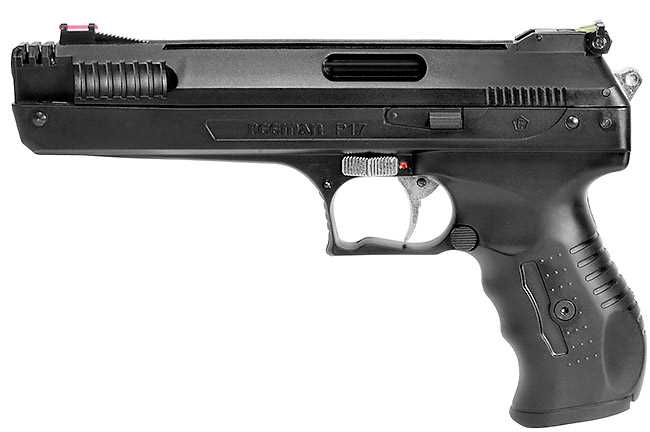 The Beeman P17 looks very similar to the P3.

In truth I have owned and tested all three airguns. The Beeman P2/HW 75 has a gorgeous trigger and feels great in my hand. It’s heavier than the Beeman P3/P17, so if weight is what you want, it’s the one for you. But the accuracy is fairly equivalent to that of the P3, perhaps slightly better, and the triggers are so close I can’t pick.

Which one do you buy? It’s subjective, isn’t it? One person values accuracy over everything else. Another values appearance. And another wants both. And still another wants the best deal possible. Three different airguns and four different ways of looking at them.

The automobiles of the 1940s and ’50s had steel bodies made from what today would be considered heavy metal stock. Today’s vehicles are made from thinner stuff — MUCH thinner stuff! But today’s cars get three times the mileage and possibly more, and their lighter weight is part of why that is true.

My digital caliper came from China and cost me $20. It measures in SAE (inch), metric and fractions of an inch. When I  measure with it I get a number out to three or even four decimal places.

My Mitsutoyo dial caliper measures only inches and stops at the thousandth of an inch. It’s heavy and the caliper jaws move with a silky smoothness. It does not need a battery like the thinner and lighter Chinese digital caliper. And it cost many times what the Chinese caliper cost.

The Mitsutoyo is by far the “nicer” measuring instrument, but it isn’t any more accurate. And it is one-tenth as discriminating. Know why I own it? It doesn’t need batteries, plus its jaws open to the 8 inches I sometimes need. The Chinese caliper is the greatest value. The Japanese caliper is the more favored tool.

Today’s report is not written to change anyone’s mind. It’s written to get you to ponder the things you appreciate and wonder why you do.