Today we test the accuracy of the .30 caliber Umarex Gauntlet 2. I must admit I was pleasantly surprised by its performance.

Given the power of the .30 caliber Gaunltlet, plus the discharge noise, I had to test it at my rifle range. I could have run a 25-yard test there, but since 50 yards was available I decided, why not?

I shot 7-shot groups because that is what the circular magazine holds. However, in one test I shot just five shots.

The weather was perfect. There was no wind on this morning, so all shots went where they did on purpose with no outside interference. Let’s get started

The first pellet I tested was the JSB Exact .30 caliber pellet that weight 50.15-grains. Sight-in was special, so let me tell you about it.

I scoped the rifle with an older  Hawke 4.5-14X42 Sidewinder scope in Meopta rings.

I was alone on the range. That means I could walk forward of the firing line, so I did. I went up to about 30 feet from the target. I always back my targets for these 50-yard tests with target paper measuring 2 feet wide by three feet high. That way if the rifle is hitting off the target paper I can usually see where the shots go. My first shot hit above the target paper because I had shimmed the rear scope ring. Knowing that at 50 yards it would drop some, I went back to the shooting bench and cranked the elevation adjustment down a lot — but not too much. It was less than a full turn of the elevation knob.

The second shot hit on the target paper about 4 inches below the aim point and 1.25-inches to the left. I dialed the scope’s adjustments up and to the right and the shot climbed two inches and also went one inch to the right. One more adjustment hit just outside the bull I aimed at. It hit just outside the black at 7 o’clock so I decided to leave the scope there and shoot a group of 7.

The first group of seven pellets measures 1.354-inches between centers. The last shot is the one on the lower left. Phooey! 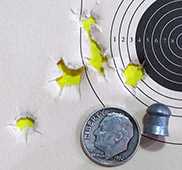 Following this group I adjusted the scope both up and to the right. I wanted the pellets in the black, but to preserve the center dot aim point.

The next group hit the target where I wanted, so I didn’t adjust the scope again in this test. Five 50.15-grain pellets went into 1.028-inches between centers at 50 yards. That’s minute-of-coyote or bobcat accuracy for sure.

I found the .30 caliber Gauntlet very hard to cock on this morning. Once I even failed to cock it and had to remove the magazine to prevent a double feed. I mention this because I believe there was some discussion about it. I filled the reservoir after this group, so there were a total of 16 shots on the last fill. My carbon fiber tank has long since lost its air to fill to 4,350 psi. There may be 3,800 psi remaining in the tank.

The next pellet I tried was the 44.75-grain JSB. I didn’t change the scope for this because I wanted to see what this lighter pellet would do. Seven of them made a 0.866-inch group at 50 yards. This group hit the target nearly one inch higher than the heavier 50.15-grainer, so now we know.

This is the smallest group of the test. It is so much smaller than groups made by any other pellet tested that I have to declare this pellet is the best one for the Gauntlet 30 — at least of the ones I tried.

The last pellet I tested was the 50.15-grain JSB KnockOut hollowpoint slug. I knew some of you would want to know about slugs and when I ordered my ammo this was the only one available.

The KnockOuts hit the target considerably below where the 50.15-grain JSB domes had hit after the final scope adjustment and I presume that is because they are traveling slower. More of their body contacts the rifling and the additional friction must slow them down.

Seven slugs landed in a 1.644-inch group at 50 yards. It’s the largest group of the test. I would not choose this round for the .30-caliber Gauntlet.

The .30 caliber Gauntlet put seven JSB KnockOut hollowpoint slugs into a 1.644-inch group at 50 yards. It’s the largest group of the test.

The .30-caliber Umarex Gauntlet 2 is a good big bore air rifle that can deliver around 100 foot-pounds of energy at the muzzle. It is a repeater, which is unusual in a big bore. I saw 28 good shots per 4,350 psi fill. The lower power level, the super-high fill pressure, plus the smaller bore diameter are all factors that contribute to the higher shot count.

The Gauntlet 2 is huge! It’s long, wide and heavy. It’s a rifle you would want to sit in a stand with, but not to carry as you trudge around the field.

Cocking is heavy. The bolt comes back easily enough until it’s three-quarters back and then it takes some real muscle to finish the stroke. I found myself putting the bolt handle intentionally into the rear slot of the receiver, to ensure that I completed the cocking cycle.

The price is very low for all that you get. And that is certainly a factor to consider when buying any big bore.

The .30 caliber Umarex Gauntlet 2 is an interesting big bore air rifle. You could think of it as a happy medium between a smallbore PCP and an all-out thumper big bore that only shoots cast lead bullets. The low price is certainly a strong point in its favor.