I told you yesterday I was going to test this rifle again. Today we look at the accuracy of the Air Arms S510XS Ultimate Sporter with Laminate Stock shooting JSB Jumbo Monster Redesigned pellets at 25 yards.

A lot tied up

I have a couple premium  accessories tied up with this rifle. There is the Meopta MeoPro Optika6 3-18X56 scope with an illuminated reticle. It’s mounted in Sportsmatch 30mm high adjustable scope rings that are themselves the best of their type that I’ve seen. They allow for both adjustment of scope height (really the angle of the scope to the bore) as well as side-to-side. Selling for $150, these rings are not cheap,and neither is the scope. They compliment each other. 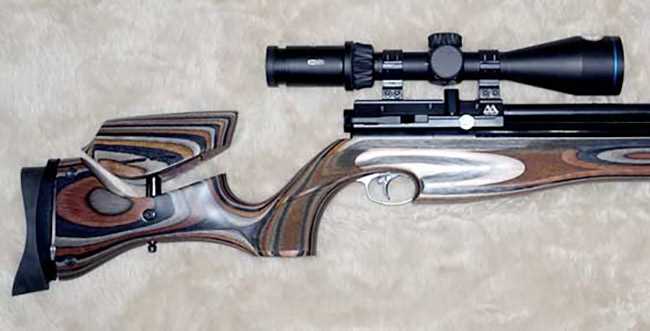 The Meopta scope on the S510 rifle.

I would normally take the scope off and mount it on other test airguns when I’m finished with the report on the S510XS, but I decided that this time I needed an accurate pellet rifle for many things, so I left it just like it is. Or at least I thought so. It turns out that I did mount the scope on a BSA R10 for a test, but after that was over I brought it back to this rifle. I’ll say more about the scope near the end of the report.

Yesterday you learned that my Air Venturi high pressure air compressor was leaking oil but the leak healed when I filled two carbon fiber air tanks. I overfilled the 98 cubic foot tank to 5,000 psi in the process. So I used that tank to fill this rifle and I decided to shoot it for accuracy with a pellet that I didn’t know about back when I originally did accuracy testing with this rifle, back in 2019.

Today’s test will be shot from 25 yards. I will shoot 10 pellets per group. In past tests this rifle made 10-shot groups as small as 0.18-inches at that distance. The rifle is rested directly on a sandbag and is shoved forward so the triggerguard sits in the valley on the sandbag and the rifle doesn’t tip side-to-side.

The rifle’s power is set two clicks down from the maximum, which is the midpoint, where it was set for the previous test in February of this year.

The first pellet I tested was the 16-grain dome from Air Arms. This is the pellet that made a 0.18-inch ten-shot group at 25 yards. This time, though the first 10-shot group with this pellet was larger. It was 0.304-inches between the centers of the two holes farthest apart.

I adjusted the scope three clicks to the left after this group. And I have a lot more to say about this scope, but I’ll say it at the end of the report. Let’s shoot the pellet I haven’t tried in the rifle yet.

I had no clue where this much heavier pellet would go at 25 yards, so although I did adjust the windage of the scope, I left the elevation exactly where it was. The pellet hit the target lower, and many will say, “Of course.” But I didn’t know.

Ten JSB Exact Monster Redesigned pellets made a 0.311-inch group at 25 yards. It’s the largest group of the day and yet it’s still quite decent. After this group I adjusted the scope up 12 clicks and 2 clicks to the left.

Ten JSB Monster Redesigned pellets made a 0.311-inch group, but nine of them are together on the bottom.

And before we move on, I will say a word about that Meopta scope. It is so razor-sharp that I saw clearly that the one pellet hole that’s high in this group came on the third shot. The other nine are grouped together and below. Therefore a second group with this pellet was in order.

The second Monster group is the real teaching point of the day. Ten pellets are in a group that measures 0.214-inches between centers. Now, THAT is a group!

One good turn deserves another, so I also shot a second group of the Air Arms 16-grain domes. This time I was concentrating as much as I could, but alas — the first shot was a pinwheel (a shot that is exactly centered and removes the 10-dot) that took out the aim point. After that I had to guess where the center of the bullseye was for the other nine shots. I did it well enough to put 10 pellets into 0.274-inches at 25 yards.

Today’s success would not have been possible if not for the Meopta scope. I illuminated the central dot and overlaid it on the dot in the target, which is why the pinwheel in the final target was such a problem.

The sharpness of the image seen through this scope is incredible and the adjustment knobs move in sharp clicks — their wonders to perform.

Because of this scope the Air Arms S510XS is one of the few air rifles I own that fits me perfectly. I have adjusted it for my personal tastes and everyone else better keepa their hands offa it!

I’m surprised by the success of the heavy JSB Monster Redesigned pellet. I have the rifle set for power in the mid 20 foot-pounds range and even if this heavier pellet boosts that by a pound and a half, it’s still going downrange pretty slowly.

I’ll be looking for more reasons to shoot this rifle in the future. You can help me with that.