Today we return to look at the Crosman Fire breakbarrel air rifle. There is a big surprise coming — at least it was for me.

I’m doing this test in the person of a new air rifle owner who has stumbled on this blog and is trying to apply the principles he has read. The Fire was all he could afford and since it came with a scope he thought it was a deal. But in shooting it he found that the scope that came bundled with the rifle didn’t focus at the distances he wanted to shoot, so he was fortunate to be able to upgrade to a UTG Bug Buster 3-12X32 scope. He mounted it on the rifle, sighted in and shot in Part 5. From that he was able to back up to 25 yards, which was covered in Part 6.

In Part 6 our fictitious owner discovered that the JSB 8.44-grain pellet was the most accurate in his rifle. Let’s see what he discovers today. I will now step into character.

In the last test in Part 6 the final group I shot was with JSB 8.44-grain pellets. Five went into 0.537-inches at 25 yards. I thought that was pretty good for the rifle, since my other groups all measured over an inch. I wanted to test the Fire with 10 shots the way BB does, so today is the day.

I shot today’s entire test with the JSB 8.44-grain pellet. I had planned to shoot two other pellets and I did try one but quit after three shots for reasons I will share when we get there. I think I have found the best pellet for my Fire.

I shot off a sandbag rest at 25 yards with the rifle held in the artillery hold. I’ll say a lot more about this as we go. All groups are 10-shot groups, though I may have to stray off the paper to show some.

I wondered whether my shots would hit the same place after two months off. My last group was on the edge of the black at 7 o-clock. The first shot today hit at the top of the bull and I wondered if the scope had been bumped. Then I remembered that I had to relax and hold the rifle as lightly as possible. More on this in a bit. 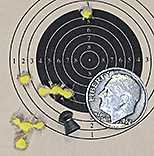 The first group measures 1.645-inches between centers, but the last nine shots are in 0.737-inches. They are exactly where the last shots from the last group in October fell.

The thing I noticed this time was that on the first shot I was pulling the rifle into my shoulder. When I relaxed, the shots all went to the same place they did before.

Okay, could I do it again? That was what I wondered. On the next target eight of the ten pellets went into 1.048-inches. But at some point I must have held the butt too hard to my shoulder and two of the pellets dropped off the paper. 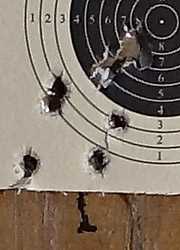 Two pellets hit below the target paper. I must have held the butt too tight to my shoulder.

After this target I tried three JSB Exact RS pellets. But when the second one hit four inches from the first and the third landed six inches from that I stopped. I guess the JSB 8.44-grain pellet is what the Fire wants.

I adjusted the scope up and a little to the right. The scopes clicks are too quiet to hear and too soft to feel. They are there, but I used the amount those adjustment knobs moved to guesstimate how much to adjust.

I was going to try my hardest to shoot the best group I could this time. The secret with this rifle is to not pull it into your shoulder. It makes all the difference in the world. I hold the rifle on the flat of my off hand that touches the back of the cocking slot in the stock and I can feel the square bottom of the forearm on my hand.

It’s the trigger that causes all the trouble. It’s so heavy that I instinctively pull the stock back into my shoulder. I have to consciously relax before the shot each time.

The first shot of the third group took away my aim point. Of course it did! But with the scope at 12 power and with its thick reticle this didn’t seem to matter as much as it might if the image were larger and the reticle were thinner. My shots seemed to go to the same place, shot after shot. It was only when I walked down to retrieve the target that I saw a single pellet was not in the main group. These 10 shots are in 0.533-inches between centers at 25 yards. This group is slightly smaller than the 5-shot group I shot in October! And nine of these shots are in 0.474-inches. This is the big surprise I mentioned at the start.

Would I shoot better and learn faster with a rifle like a TX200 Mark III? Undoubtedly. And someday maybe I’ll have one. But, with work, even a cheap air rifle can be made to shoot — or at least this one can.

That’s as far as I’m going to take this report. It appears that Crosman is no longer selling the Fire. But what we have done in this series should apply equally to any spring-piston air rifle.

In this series I have shown you the ins and outs of breaking in, learning and adapting to a breakbarrel spring-piston air rifle. I hope the series has been of some help.