Today I tell you how straightening the barrel of this century-old BB gun went and then we look at its performance. Last time I shot a single BB out at 157 f.p.s. What will she do today?

Boy, did I ever have a lot of helpers ready to school me on how to straighten this solid brass shot tube! The way some of you talked you would think this thing is going into a NASA satellite!

I straightened the shot tube exactly as I described to you in Part 2, by laying it on a flat steel table (on my vise) and tapping it gently with the wide head of a plastic hammer. read more

Chris USA suggested today’s topic last Friday, when he asked my about the tantalizing results I got from the Webley Mark II Service air rifle. Among his comments, he said this, “Perhaps the biggest thing to consider,… and maybe more accurate,…. it is just plain LUCK. Maybe, it is just the plain and simple fact as to how the pellets flew and just happened to be where they landed. So yea,… I would be interested hear your thoughts on what would appear to be sporadic anomalies.”

Among the “sporadic anomalies” he referred to was the last group, where 3 shots went into a tight cloverleaf and the other 2 were wild. What causes a rifle to do that — to put several shots so close together and then throw the others far away? 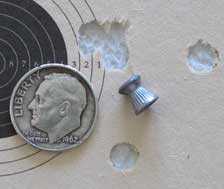 This is the target Chris referred to. Why are 3 pellets so close and the other 2 so far away?

I told Chris he had just asked the big question — the one people have been discussing since the firearm was invented. It all boils down to the title of today’s report, What is accuracy?. I told Chris that Dr. Franklin W. Mann spent 37 years of his life experimenting to discover the answer. He wrote a book about his findings titled,

The Bullet’s Flight from Powder to Target read more