Today I tell you how straightening the barrel of this century-old BB gun went and then we look at its performance. Last time I shot a single BB out at 157 f.p.s. What will she do today?

Boy, did I ever have a lot of helpers ready to school me on how to straighten this solid brass shot tube! The way some of you talked you would think this thing is going into a NASA satellite!

I straightened the shot tube exactly as I described to you in Part 2, by laying it on a flat steel table (on my vise) and tapping it gently with the wide head of a plastic hammer.

The photo I showed you made it look like there was a single bend in the tube. The truth was the tube was bent in numerous places. It was twisted subtly into a serpentine shape.

I have some experience doing things this way, and in less than 10 minutes I had it much straighter. I also cleaned the inside of the shot tube with a wire bore brush. It’s not perfect, and I doubt it ever will be, but it’s better than it was.

After straightening and cleaning the 4.55 mm lead balls dropped all the way down the shot tube to the place where the tube tapers smaller. After maybe 10 shots, though, the BBs began stopping a couple inches up from the bottom and remained that way for a while. I still had to seat the BB into the tapered place with a cleaning rod, but now they all shoot out. And I picked up one additional thing by straightening and cleaning the shot tube.

Now that the ball goes into the tapered place in the shot tube, I can also load 4.50 mm lead balls. They are lighter than the 4.55 mm balls. But, better than that, they are widely available. Where the 4.55 MM balls are expensive and hard to find, the 4.50 mm balls are standard airgun ammunition.

These are number 12 zimmerstutzen balls. If you don’t know what that means, read my article on zimmerstutzens. After straightening and cleaning the bore they were stopping about two inches from the bottom of the shot tube. Before I straightened and cleaned the barrel they had been stopping about two inches from the muzzle, so there was definite improvement.

Just for fun I then dropped a ball into the shot tube and did not press it in with a cleaning rod. It did seem to fall all the way into the tapered breech. It came out at 154 f.p.s.

This little BB gun is not perfect. While I was shooting the 4.55 mm balls, the entire shot tube came out of the gun on one shot! It apparently works free, now that I have removed it so many times and also oiled the airgun liberally.

Next I shot H&N 4.50 mm lead balls. Pyramyd Air isn’t stocking them at present, but they do have Gamo 4.50 mm lead balls. The H&N balls I shot weighed a very uniform 8.3 grains. They all seemed to drop into the taper in the shot tube, but to keep both tests the same I also pushed them lightly into the breech with the cleaning rod and discovered that they were already there!

Just for fun I then dropped one of these smaller balls into the muzzle and shot it without pushing it into the breech with the cleaning rod. That one registered 157 f.p.s. on the chronograph. So it does reach the breech.

The smaller lead ball may not go faster because there is more room inside the bore for the air to blow past the ball. I don’t want to try any smaller balls because I think accuracy will suffer. Remember that we learned that lesson while testing the Tell BB gun.

What does today’s test give us?

Today’s little test gives us two lead balls to test for accuracy. I believe I will press all the balls down with the cleaning rod, but not hard. I just want to be certain they are all at the breech.

Well, this little 120-year-old BB gun still works. It may not have been too much more powerful that this when it was new — maybe 200 to 225 f.p.s.?. It cocks easily and is as light as a feather. Ideal for children! 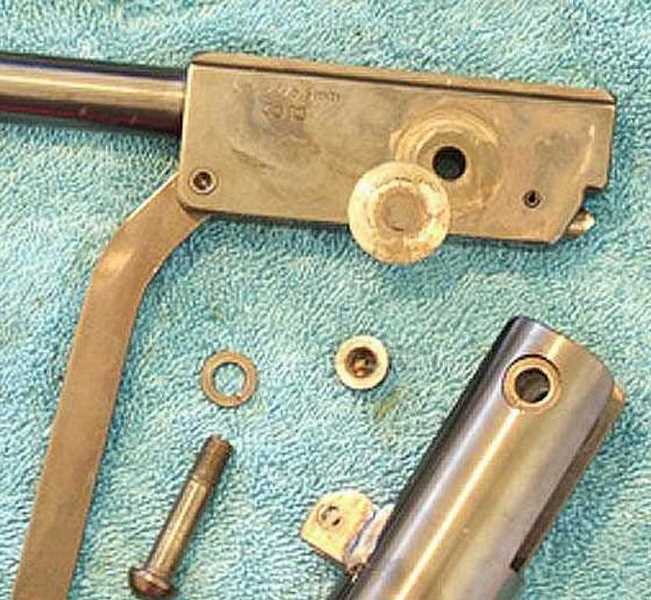 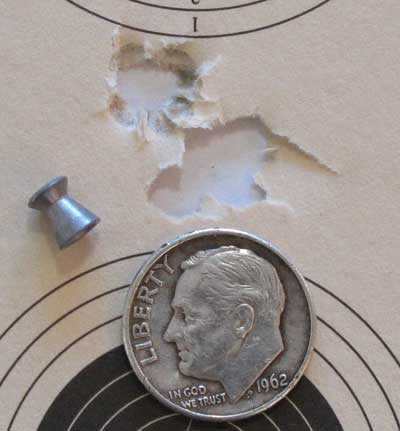