Today we are going to discuss optically centering a scope. It’s going to be a difficult report for me to write, because the subject does not have much merit for airgunners. So I will compensate by adding some things that do have merit. Let’s go!

What optically centering DOES NOT mean

Let’s start with what optical centering DOESN’T mean. The optical center of the scope is not the place at which there are an equal number of clicks up and down and side to side. I say that and some of you already know it and yet the website “RifleOpticsWorld” has an online article written by “Rifle Optics Team” that says that setting a scope to the optical center is simply returning it to the factory setting. Excuse me?????  read more

This is an ongoing series about scope questions and issues. Blog reader David Enoch asked for it originally, but many other readers have jumped in since it began. Today, I’ll talk about adjustable scope mounts.

This series was started for blog reader David Enoch; but after reading the comments many of you have written, I have to think it’s for most of you. Today, we’ll look at optically centering a scope — what’s involved and why you’d want to do it.

Not all scopes work this way, I’m aware, but the majority of modern scopes do; so let’s not get into discussions of German scopes and Russian scopes whose reticles actually do move. They’re sufficiently uncommon that there’s no need to confuse the average shooter with their differences.

An optically centered scope is one whose crosshairs remain fixed on a target as the scope is rotated 360 degrees on its axis. I’ve never seen a scope that was perfectly centered, and I doubt one exists. The closest I’ve seen was a scope whose reticle moved about one-eighth inch when rotated 360 degrees while focused on a target 20 yards away. Most scopes can get only to within three-eighths of an inch under those circumstances. 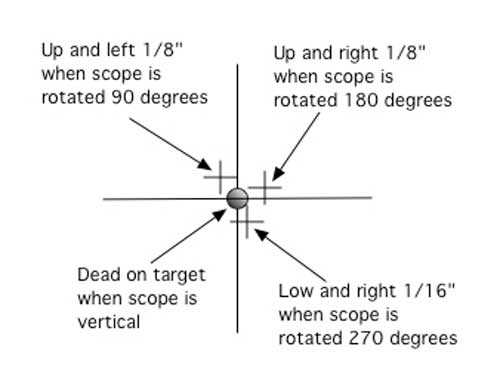 When the scope tube is rotated, the intersection of the crosshairs moves against a distant target. The object of optical centering is to get the movement as small as possible.

Why optically center your scope?
This practice started and died with field target. Shooters discovered that if their scopes were not parallel with the axis of the rifle’s bore, not only would the pellet impact rise and fall as the elevation knob was adjusted for different targets — it would also move from one side to the other — typically from right to left, though not always. That’s because the scope was right on at the sight-in distance, but off to one side when the scope was adjusted closer and to the other side when it was adjusted farther. 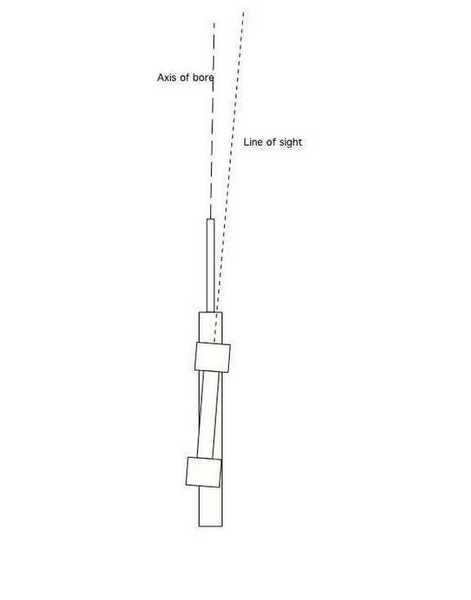 This drawing of a top-down view of a scoped air rifle is greatly exaggerated, but it shows how a scope may not be aligned with the axis of the bore. 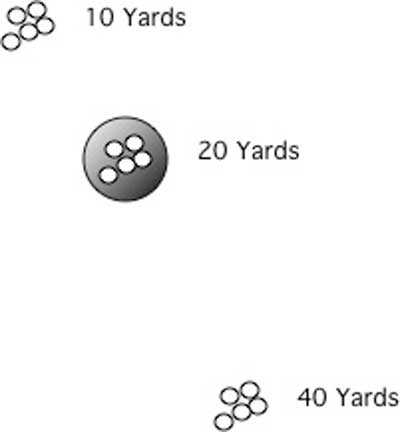 I was writing The Airgun Letter (1994-2002) when I competed in field target. Although I started out using springers and the holdover method of sighting, I switched to PCPs, which gave me a better chance to compete. I also started adjusting the scope’s elevation for every change in distance. That was when I discovered optical centering.

The way to optically center a scope in those days was to put it on a solid rest that did not move but allowed the scope to rotate around its axis (in this case that means the scope tube) 360 degrees. Then sight at a target at some distance and watch the center of the reticle move against the target. 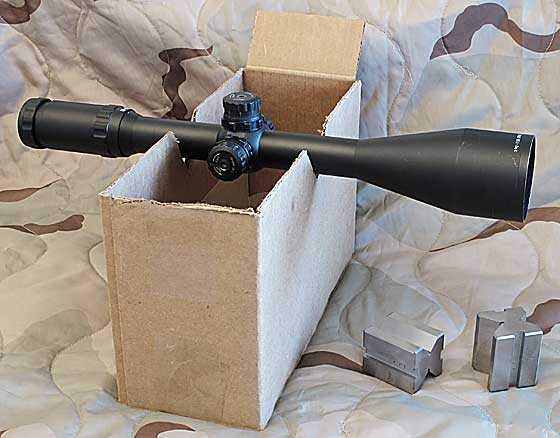 I started with actual machined Vee blocks, until I realized that precision isn’t required to optically center a scope. A cardboard box with 2 Vee notches works just as well. read more