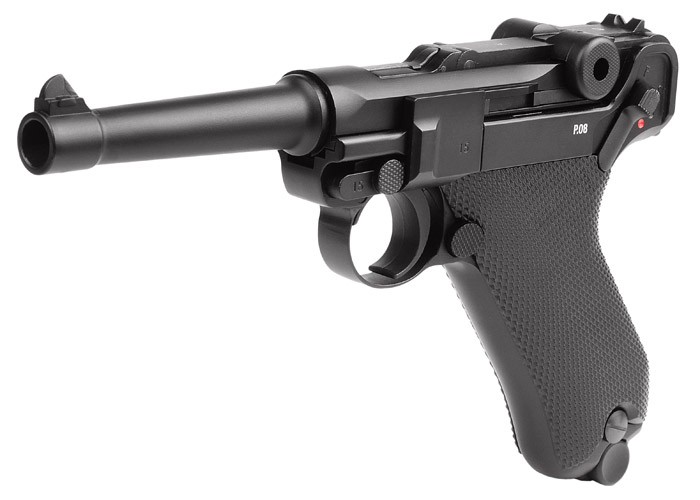 I received this pistol last week and I have to say WOW. This is one of the best built blowback togglelock lugar I have seen. Unlike its WE airsoft counterpart, this gun is solidly built and the internals are beefy and strong and not o verly engineered but having said that the proof is in the function and mine funtions perfectly. the trigger pull is very light and will take you by suprise if you are not careful. The accuracy is spectacular for a smooth bore bb gun on all the types of bbs I shot with it,except copperheads (@ 20 ft.)the safty only engages when the pistol is cocked and ready to fire, the pistol feels great in the hand and is nicely balanced and the sights are easy to use even though they are in motion the kick is a bit harder than my 22s. and the toggle lock up on the last shot is nice all in all I would say I can see why the Lugar p08 is so popular even today. This pistol looks good ,feels good, shoots good and the fun factor is off the charts. So I give it a solid 5 star

Only 1 thing and anyone who ownes the WE p08 airsoft will know about part # 122 . It is the flat washer that locks the clevis at the rear of the toggle bolt to the upper right side of the upper receiver, they fall off very easy especially if you remove the upper receiver for cleaning and lubing, if you want to get it to stay on and still be removable without ruining the pistols finish use a rubber cement that is safe for skin applications, apply a little around the washer and put it back on. it will hold the part on and can be removed and simply rubbed off like without damaging the pistol or the finish , and beleive me that part can come off even when your shooting the gun and there is only one place I know to get that part.but that is the only thing that could ruin your day about this pistol, or if you run out of co2 or ammo. I LOVE MINE!!!

buy it it will be the most fun purchase you will make it is solid fun and has a solid backing at Pyramid. p.s get a spare mag or two if you can afford it. I also used Crosman and Swiss Arms c02 powerlets , just make sure you have them centered in your mag(centered on each side ) or you will not get the mag. in the grip.

I have a collection of real Lugers, it is an almost exact replica. If you want to have an expensive metal replica, go ahead, if you expect having fun shooting it....NO

I purchased two, one leaks out of new box the other quit working after a few cartridges with inoperative trigger, Been 3 weeks Pyramid Air got my new and broken Luger and still have not shipped, item is in stock....March/April 2020