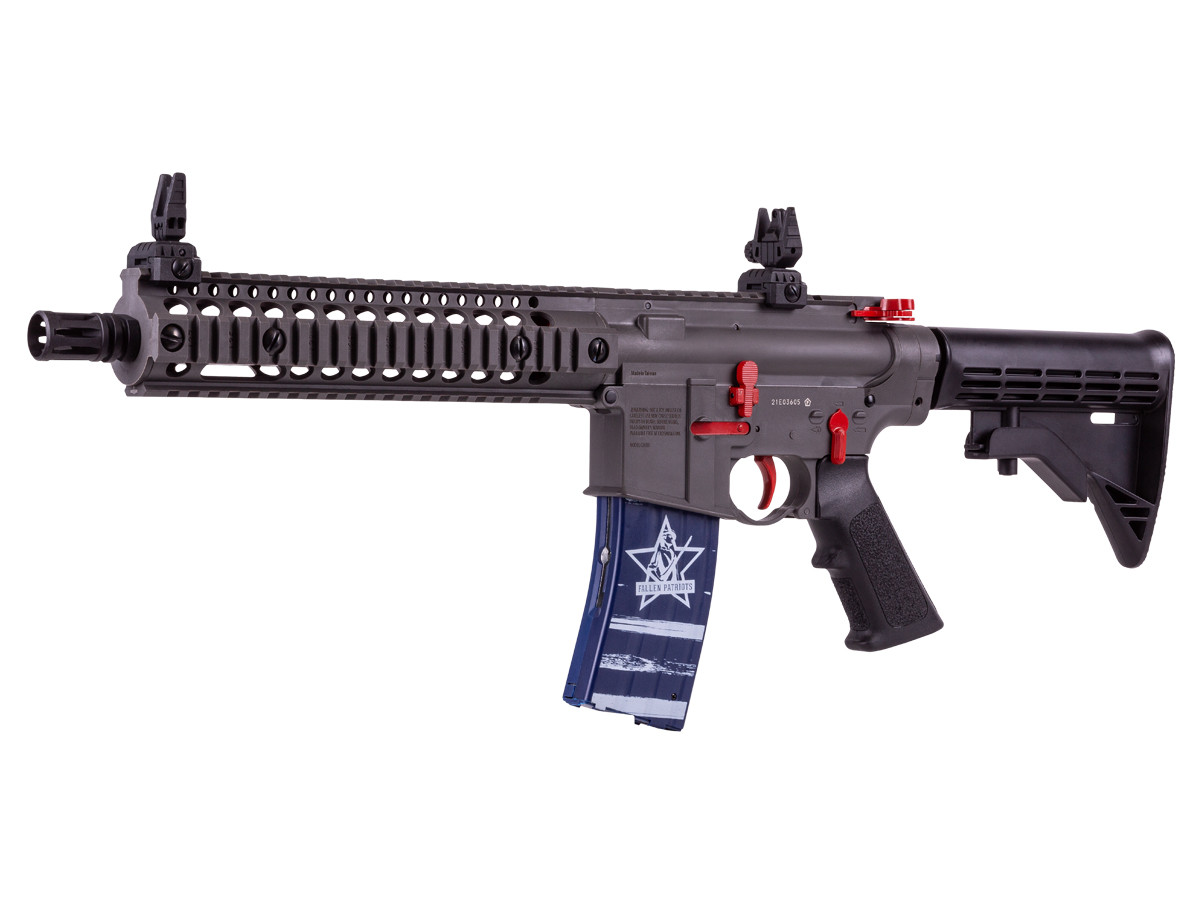 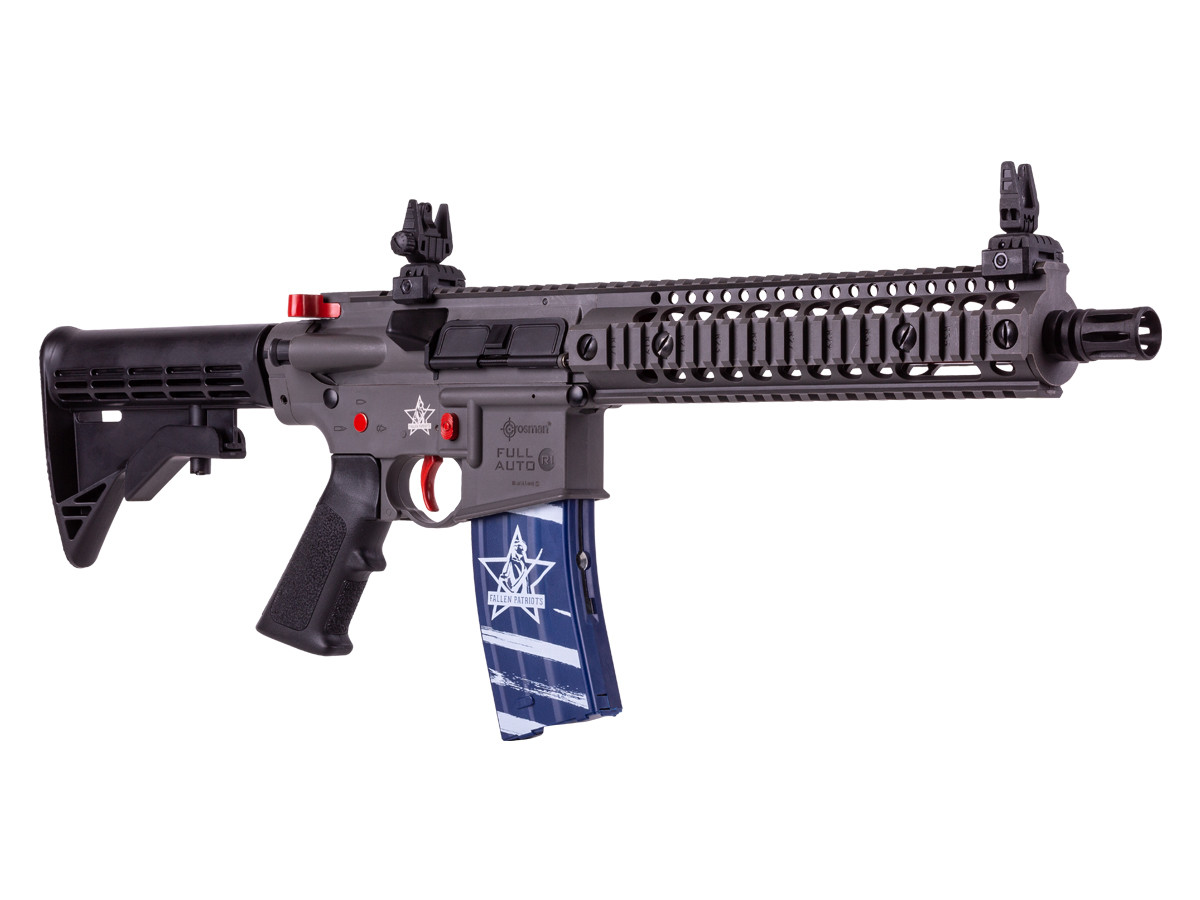 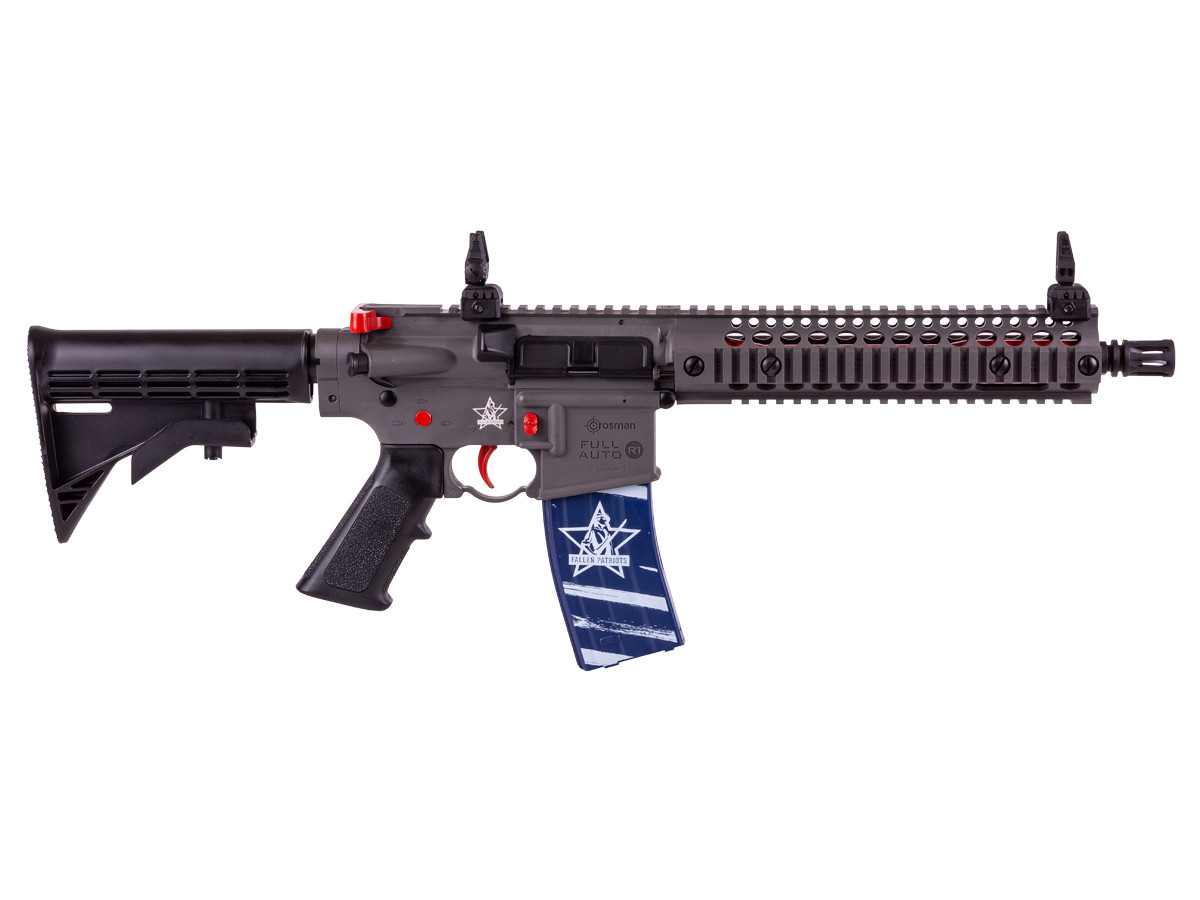 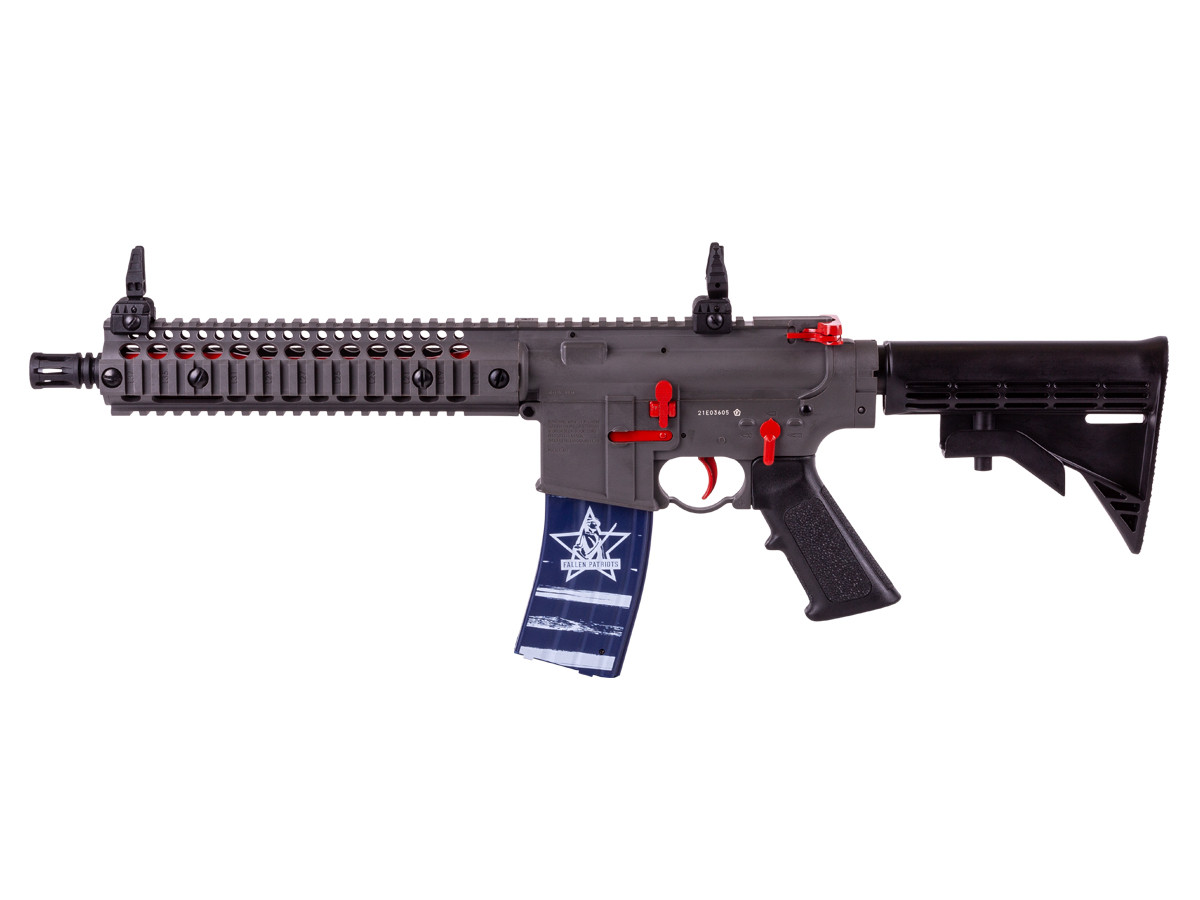 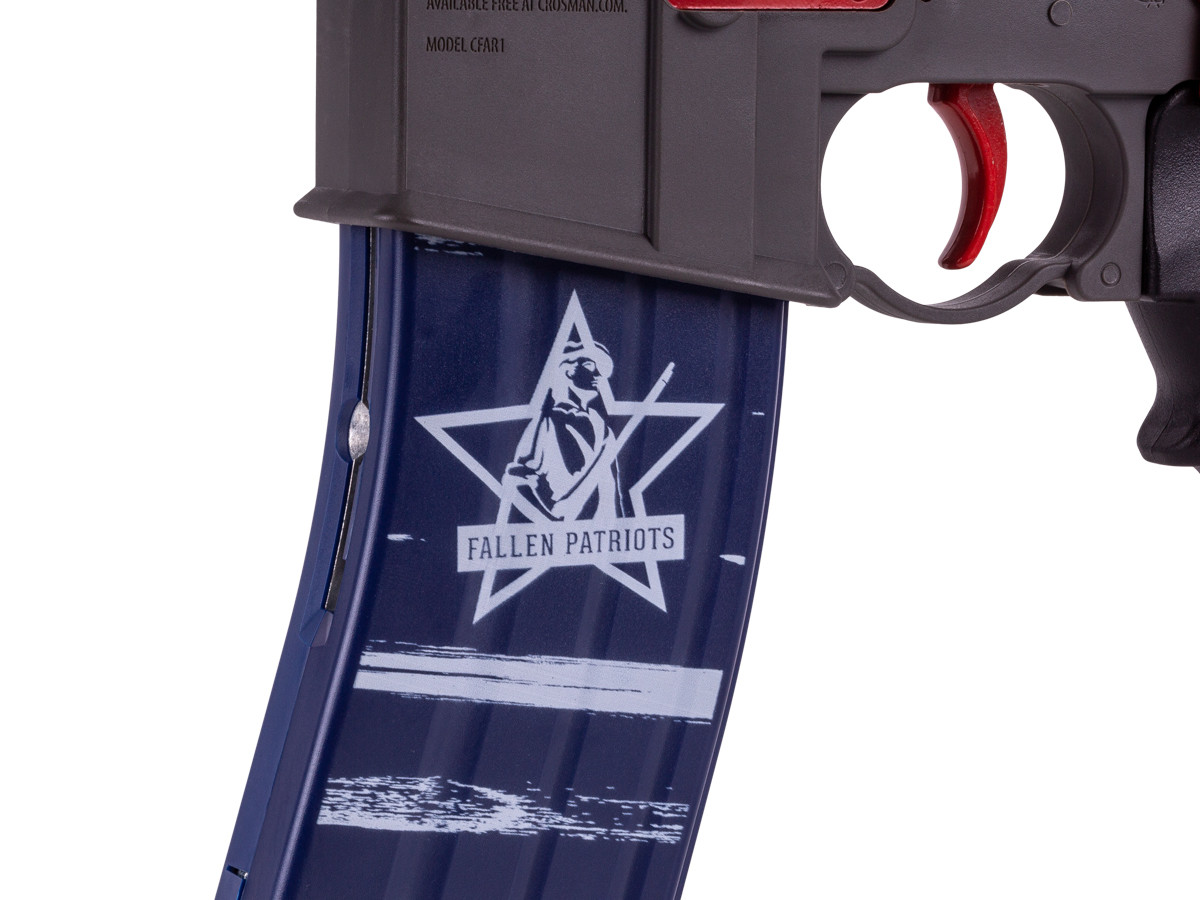 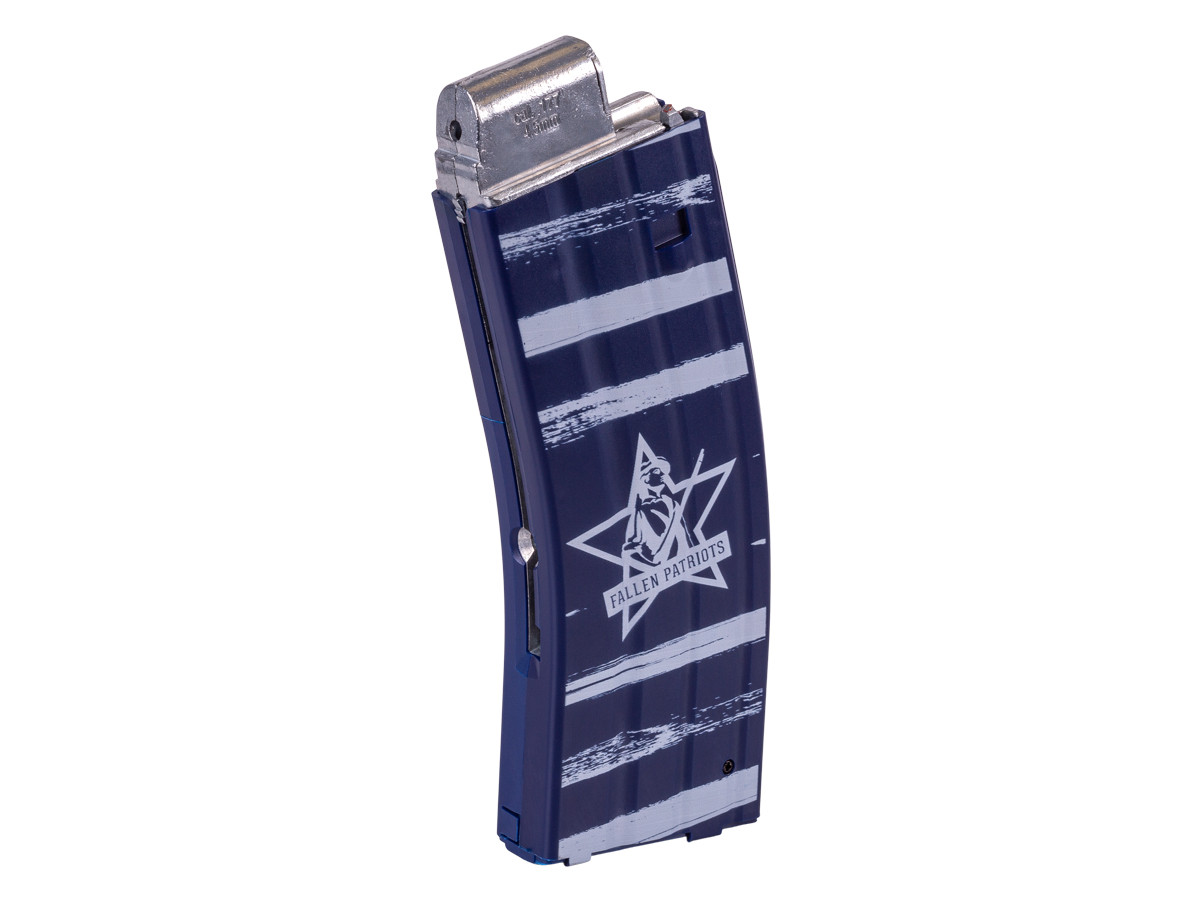 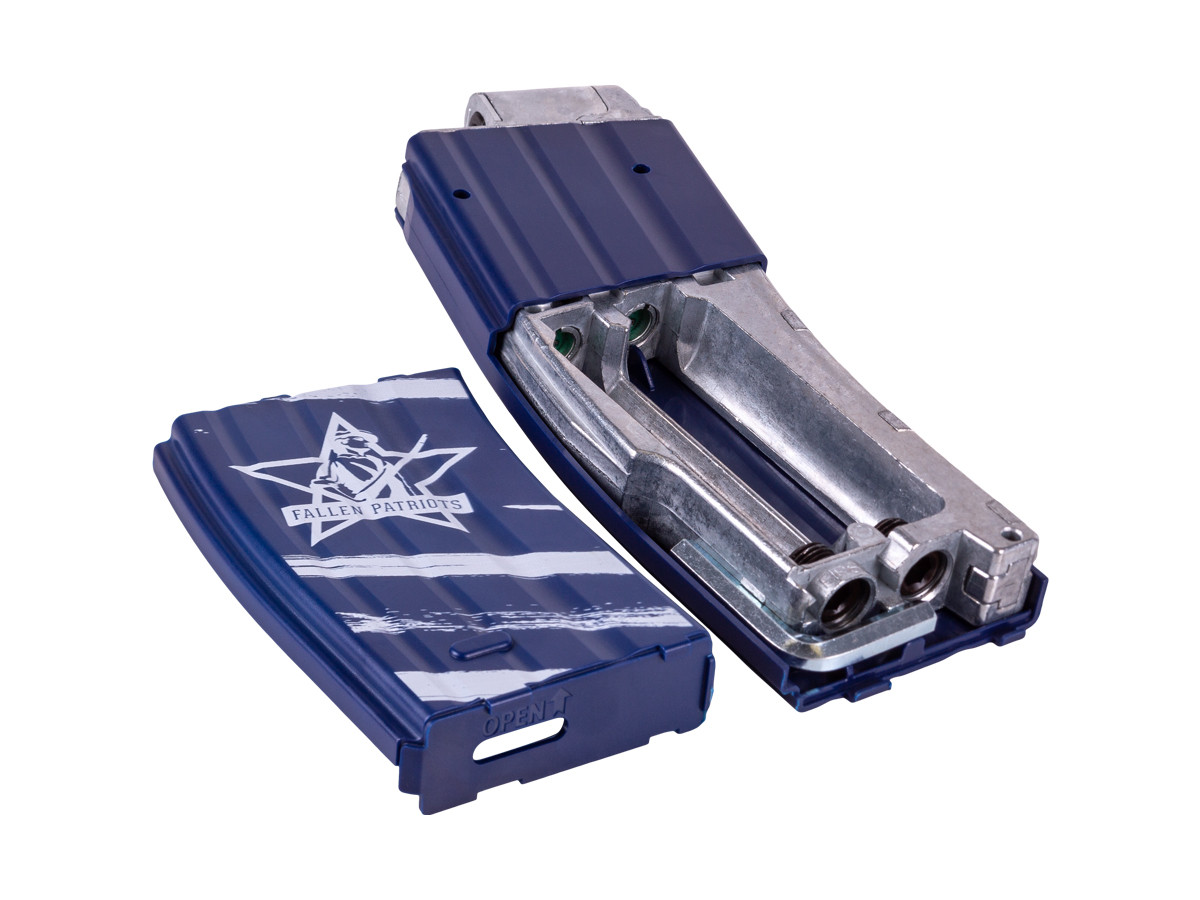 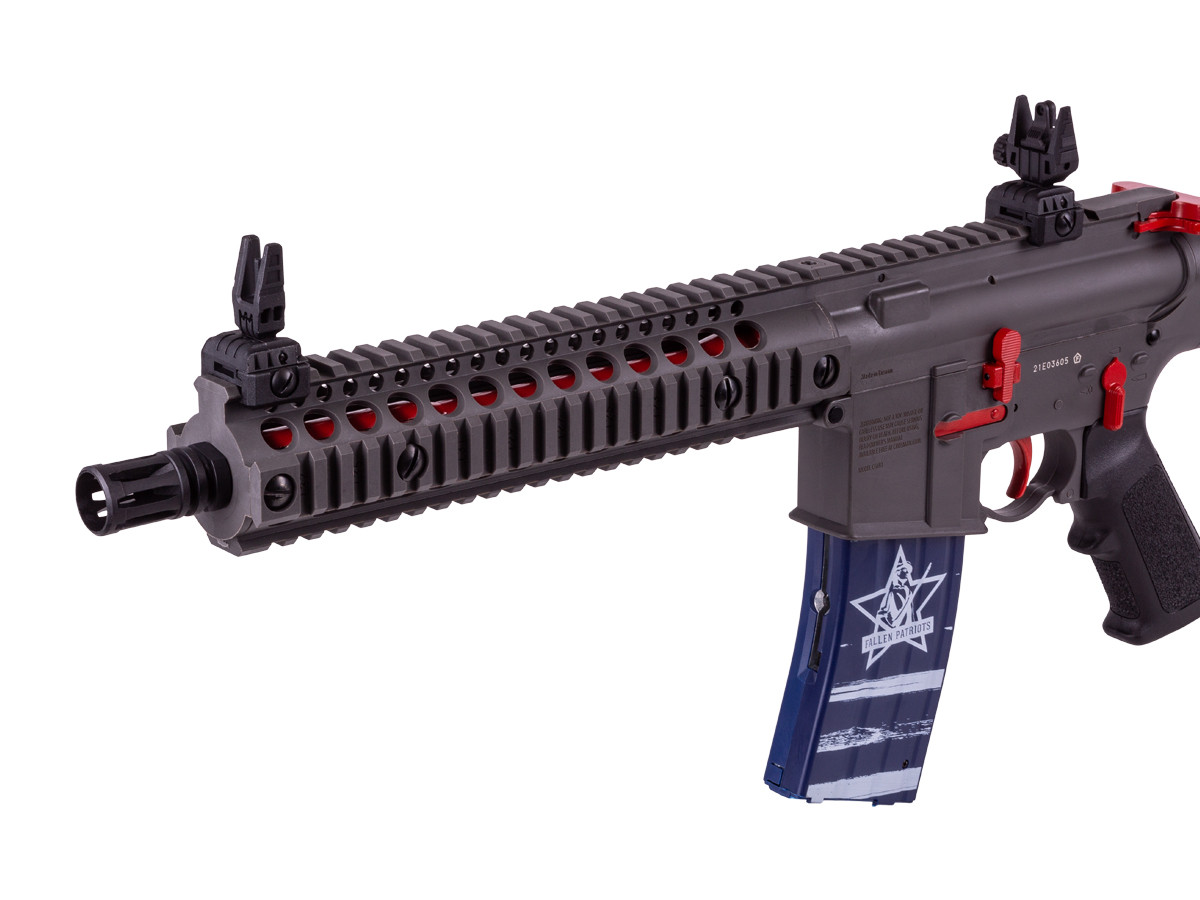 
The Crosman R1 Full Auto BB Air Rifle, Fallen Patriots Edition gives shooters the same performance as the standard edition, and also helps to support the Children of Fallen Patriots Foundation, an organization dedicated to providing educational counseling and college scholarships to children of US service members who lost a parent in the line of duty.

This limited edition includes features not found on the normal version, including a special stealth gray stock with the Fallen Patriots logo above the trigger, in addition to patriotic coloring, such as red metal components and a blue magazine with the Fallen Patriots logo on both sides. A portion of the proceeds from the sale of these airguns is donated to the organization.

This select-fire CO2 BB gun includes removable front and rear open sights. Reaching velocities of up to 430 FPS and a cyclic rate of up to 1400 rounds per minute, this airgun is designed to deliver features focused on fun and excitement.

The air rifle gives shooters realistic feel and operation, plus AR platform compatibility for the ability to customize its parts, such as the pistol grip and rear stock. It uses two CO2 cartridges contained in the 25 round drop free magazine and has a buttstock that adjusts to 6 separate positions, resulting in a variable length of pull.

For those airgunners familiar with the flexibility of the AR firearm platform, this represents an alternative that does not cost as much to shoot, in addition to being less noisy. For anyone who's not familiar, this represents an easy introduction to the safe handling and operation of something similar, with blowback that mimics recoil, AR takedown pins, and more.

For optics, this CO2 airgun comes with removable front and rear open sights that fit on the upper rail, and the quad Picatinny rails on the forearm can be used for accessories like bipods, lights, and lasers.

To get an enjoyable select-fire CO2 BB gun that aids a worthy organization with a portion of the proceeds and also provides many of the same features as the AR platform, in addition to a thrilling way to shoot cans or targets, buy a Crosman R1 Full Auto BB Air Rifle, Fallen Patriots Edition today at Pyramyd Air.

I have this, a regular R1, and a DPMS. They are great guns to tinker with. I kinda lost interest in the AR platform during my time in the Army, but after messing with these things I have started to really appreciate the modularity. I have totally disassembled all three, and moved stuff around and tweaked to my taste. My Fallen Patriots R1 has a Crosman 2100 barrel now that works well. The DPMS had a barrel out of the Crosman M4 barrel, it didn't work out so well, but it was the proof of concept I guess. This one has a red dot now, The DPMS has an open reflex. I like the bolt carrier assembly so far. Nothing has broke yet. They seem to be fairly forgiving and strong, even if the receivers are plastic, you don't really notice. I appreciate being able to use real and airsoft accessories on them. Generally, I have faith and trust in the reliability of this platform so far. I have shot over 5000 BBs between the 3 of them so far and it is pure joy to hit the fun switch.

Different aperture sights, the ones that come standard do not seem that great. They work, I just do not care for them. The mags are too expensive and the check valve ball does not always work the way it should loading CO2 cartridges. I would Like to see a higher FPS, and one that shoots pellets. Tried shooting Dust Devils once, never again. Tried lead BBs, and they bounce back too. It would be nice if the upper and lower were metal.

The look and feel. Added scope, bi-pod and flashlight an handles add-ons well.

As a collector this a must have. Order extra mags, ammo and CO2 because once you start shooting you can't stop. Having the UMAREX Legends collection this Crosman rates with the quality expected from Crosman. Read the instructions carefully and make sure to oil in the spots indicated...Part of the purchase price goes to a good cause...This is a limited edition....Don't pass it it up...