Before we begin I have a word about my health. Next Tuesday I’m going to have my pancreas repaired. This is hopefully the final operation I will have to undergo. It will be a major operation where they open me up rather than going in laprascopically, so I’ll be in the hospital for a week or possibly longer to recover. I have written blogs to cover the time I’ll be away, plus I’ll probably have my laptop at the hospital, but I may not be as easy to reach next week. If everything goes according to plan, I should get the drain out of my side and the stent out of my pancreas by the end of this year. And, while I’m away, I’d like to ask the veteran readers to help out the new guys, as you always do.

We’re back with the big Diana 75 target rifle today, and it’s velocity-testing day. Mac was kind enough to test the rifle with quite a few pellets, so we’ll get a good picture of how powerful it is. Along those lines, I was asked this week by someone in the UK how difficult it would be to boost the 75’s power up to the UK legal limit of 12 foot-pounds. I told him it would be impossible to do because the rifle was engineered to do a certain thing, which is shoot targets. The powerplant doesn’t have the swept volume to go as high as 12 foot-pounds. But from his question, I could tell he wasn’t asking what he really wanted to know.

He actually was so impressed by the 75’s accuracy at 10 meters that he extrapolated it out to 55 yards and wondered what a wonderful field target rifle it might make. Well, a TX200 is just as accurate, and it’s already been engineered for field target.

I see that viewpoint from the field target crowd a lot. They see the stunning 10-meter accuracy of these target rifles and assume they would be perfect for field target, if only the power could somehow be boosted. Back in the 1990s, people were going crazy by turning $2,000 Olympic PCP target rifles into $3,000 field target competition rifles, when all they had to do was look around at some of the fine rifles that already existed. Just because a gun shoots a tight group at 10 meters doesn’t mean that it’s also going to be as good at long range. It probably will be pretty good, but so will a purpose-built rifle costing one-third as much.

A .45-70 revolver doesn’t have the same range and power as a .45-70 rifle, not to mention its wrist-snapping recoil! You can’t just extrapolate a certain feature out to infinity and have it remain stable all the way. Things tend to work best when all the many factors are engineered to complement each other and to work together. Okay, so now we understand that. Back to today’s report.

Mac’s rifle is still in the original styrofoam shipping container it came in back in 1979! Kevin saw it on Mac’s table at the Roanoke airgun show, and he commented how new it looked. What he didn’t see, because it wasn’t displayed, was the complete original set of tools, sight inserts, literature and parts that also came with the gun. This really is a complete set! 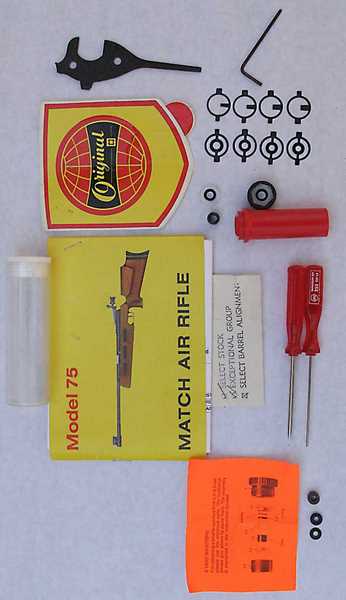 As complete a set of original accessories as you’ll ever see. There’s even a sighting adapter to allow you to shoot at 6 meters instead of 10!

And, the sights are a wonder to behold. Back in its day, the Diana 75 went head-to-head with Feinwerkbau, Walther and Anschutz. All four makers had beautiful target sights that helped the shooter extract all the points possible from their target rifles, and Diana did not scrimp in any way. When the rifle was resting on your shoulder, the rear sight cup came right to your eye and closed out all of the world except that little black circle 33 feet away. It worked like radar, guiding your body to keep the black circle centered inside the front sight element, which was usually an aperture of some kind. Though you looked through that huge adjustable rear sight, you had no perception of it being there. All you saw was the front sight element and the bull. 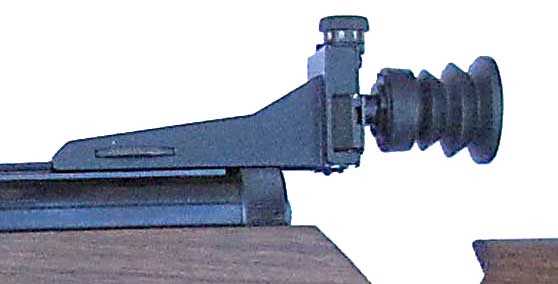 Once you had it up to your eye, you lost all sense of the huge rear sight and fully concentrated only on the front sight and target.

The front sight of the 75 is a traditional globe with a wide variety of inserts. You can see in the picture what was available back in the late ’70s when this rifle was new, but today the clear Lucite aperture has replaced all the old inserts in popularity, because it enables the shooter to see much more than just the bull he’s shooting at. Shooting at the wrong target used to be a huge problem when there were 12 bulls on a target sheet, and the clear front inserts solved it. Of course, these days, the targets are presented electronically, one bull at a time, so the possibilities of doing that are greatly diminished, as long as you don’t shoot at your neighbor’s target. 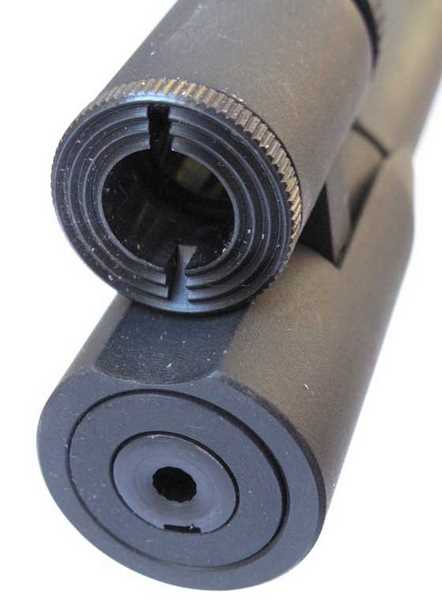 The globe front sight is typical for 10-meter rifles. Of course, it accepts many different inserts.

RWS Hobby
The RWS Hobby pellet is generally the lightest lead pellet available. In this rifle it averages 619 f.p.s., with a 28 foot-second spread from 607 to 635 f.p.s. The average muzzle energy is 5.96 foot-pounds.

JSB Diabolo Exact 8.4 grains
A popular round-nosed pellet is the JSB Diabolo Exact 8.4-grain dome. JSB labels this as a match pellet right on the tin, but of course you cannot shoot in a match with anything other than wadcutters, so it really isn’t a match pellet. That’s just the name they gave it, and I prefer to call it a dome to avoid confusion. It averages 566 foot-pounds, with a spread from 554 to 581 f.p.s. The average muzzle energy is 5.97 foot-pounds.

RWS Superdomes
RWS Superdome pellets are one of Mac’s standbys. He likes their performance in many guns and always falls back on them in a pinch. In the Diana 75, they average 538 f.p.s., with a spread from 524 to 544 f.p.s. At the average velocity, they generate 5.46 foot-pounds.

Mac noted that all pellets fit the rifle’s breech easily, with Hobbys being the loosest fit. And he reminded me to tell you that this gun has been resealed. If you recall, I mentioned that all RWS Diana recoilless rifles have problems with their original piston seals dry rotting, so Mac has had this one resealed with a more permanent material. Outwardly, the gun looks brand new, and with the new seal it acts as good as it looks. The 75 I owned years ago averaged 630 f.p.s. with RWS Hobbys, so this rifle is in the same ballpark.

Mac made one additional observation. It was 56 deg. F in his garage when he chronographed these shots. By the time he reached the third type of pellet, the velocities started to vary wildly. He thought the rifle was failing; but when he shot at a test soda bottle, the shot seemed as good as ever. What it boiled down to was the battery was dying and the cold weather was speeding it along. The 75 is so fast to cock and load that Mac was staying ahead of the battery’s recovery time. When he slowed down between shots, the battery caught up, and the velocities returned to normal again. With cold weather hitting us now, that’s something to keep in mind.

We’ll look at accuracy next, and I promise you, this rifle has it in spades. You’re going to be envious.