Announcement: Brendon Krahn is this week’s winner of Pyramyd Air’s Big Shot of the Week on their facebook page. He’ll receive a $50 Pyramyd Air gift card. 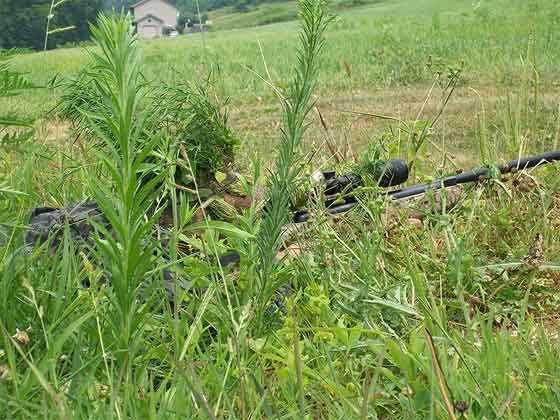 Brendon Krahn is this week’s Big Shot of the Week. He’s sniping at starlings with his .177 Remington NPSS.

That’s right, sports fans, today you’re getting a twofer. For the benefit of our readers outside the U.S., a twofer is slang that means “two for the price of one.” I decided to report on both Mac’s Diana 60 velocity test and my HW 55 Custom Match velocity test for reasons I will explain in each part. Grab a large cup of coffee and an extra Danish and sit back! read more

Today, we’ll look at the accuracy of the Diana 75, and I’m going to tell you right now that it’s something to behold! Mac is a dedicated mini-sniper — the sport in which you use 10-meter rifles to shoot at small reactive targets like empty cartridge cases from long distances. Mac has done it from 50 yards, shooting offhand with his favorite FWB 300 target rifle. But he’d forgotten how very nice this Diana 75 is until this test forced him to rediscover it.

The test was conducted outdoors in calm weather. First, I asked Mac to shoot groups at 10 meters, because this is a 10-meter rifle, after all. But then he moved out to 25 yards and shot the same pellets. read more

Before we begin I have a word about my health. Next Tuesday I’m going to have my pancreas repaired. This is hopefully the final operation I will have to undergo. It will be a major operation where they open me up rather than going in laprascopically, so I’ll be in the hospital for a week or possibly longer to recover. I have written blogs to cover the time I’ll be away, plus I’ll probably have my laptop at the hospital, but I may not be as easy to reach next week. If everything goes according to plan, I should get the drain out of my side and the stent out of my pancreas by the end of this year. And, while I’m away, I’d like to ask the veteran readers to help out the new guys, as you always do. read more

I’ll be having another outpatient procedure today and will be gone most of the afternoon. I’d like to ask the regular blog readers if they’d help out answering questions from the new people. Edith will be with me in the hospital and will have her computer and also help out with answers if needed.

Readers who have been with us for several months know that my friend Earl “Mac” McDonald has been helping me test airguns while I recover from my hospitalization. Well, Mac is an airgunner, too, and he has a nice collection of fine vintage guns that he would like to share with all of us. So, while we were on the way to the Roanoke airgun show, we discussed the possibility of his testing some of his guns that may not be well-known among airgunners today. read more