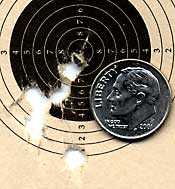 It was bound to happen sometime, and today was the day. My Oehler 35 chronograph failed to function at the range, so today has to be an accuracy day instead of a velocity day. The problem was overhanging trees that blocked the sky from the skyscreens. I could have moved into the sun, but I was short on air; and before I ran this test, I had no idea how much air the pistol would use. So, conservation was the main goal. I went straight to shooting groups.

Perhaps, now is the time to mention that I mounted the superb Hawke 4.5-14×42 Sidewinder scope on the pistol in Leapers 30mm high rings. Because I used a two-piece mount, the positioning options are very generous, which may be important as I get used to holding the pistol.

After a sight-in of two rounds at ten feet, I was on paper at 25 yards and ready to begin. Then, the enormity of this report hit me. The TalonP air pistol has adjustable power and, despite my saying in Part 1 that everyone will probably leave it at full power all the time, I discovered otherwise when the situation became real. With adjustable power and a fairly broad choice of pellets, I could spend a year with the gun and not learn all its secrets.

When you find yourself in a similar situation, you can turn it around by starting with what you know. I knew that AirForce said this gun gets 30 good shots on low power, so I adjusted it as low as it would go and began shooting.

They aren’t boasting, folks. This pistol really does get at least 30 good shots on low power. And they are not low-powered shots, either! We’ll have to wait until I get the chronograph numbers to back it up, but I could tell just by the time of flight and the impact sound made by the pellet that these quarter-inch lead pellets were hitting with authority.

Even at the lowest power setting, the TalonP air pistol slammed the target hard. These five JSB Exact King pellet went into 0.751 inches at 25 yards.

The first pellet I tried was the 25.4-grain JSB Exact King dome. These fit the bore very well. They sailed right into the target and left only enough of the center of the bull that I didn’t lose my aim point.

The early success got me started; and from that point on, I had a ball. I shot the pistol 30 shots per 3,000 psi fill, but I shot five-shot groups instead of ten because I was still thinking about air conservation and there were lots of pellets and power settings to test. 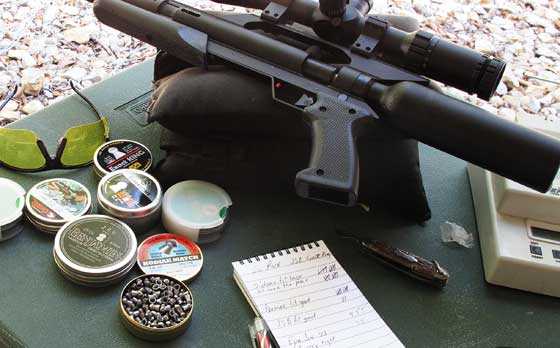 Lots of pellets and lots of options make for an involved test. 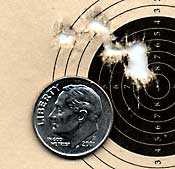 After the first run, I started fiddling with the power setting. The JSBs did well until I boosted the power to No. 6 on the dial. Then the pellets started to open up. 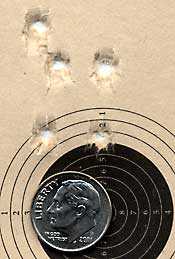 When the power wheel reached No. 6, the group started to open for the JSBs. 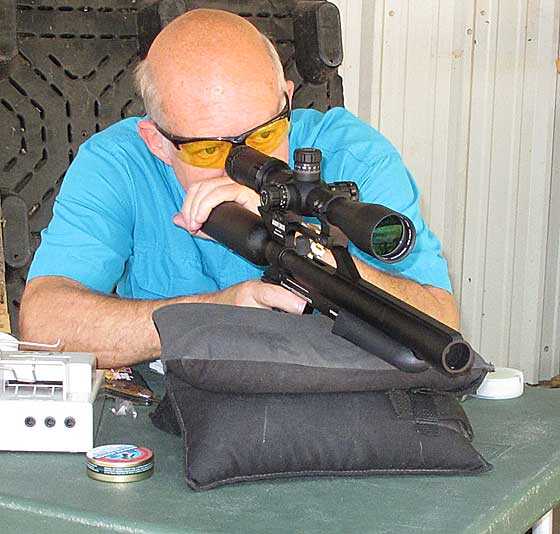 Shot from a rest, the pistol was very stable.

By this time, I’d fired many groups and was ready for the big enchilada — the 43.2-grain Eun Jin pointed pellet that produces 50 foot-pounds in this gun. I filled the tank and ran the power wheel all the way up.

Loading these big pellets was a chore! They take a real push to seat them in the breech, and I got sore fingers after loading just a few.

Up to this point, I thought the discharge sound of the gun was well below what I was prepared for. But that left me wide open for the first powerful shot that barked as much as a .25-caliber pocket pistol. A second shot sent me hunting for ear protection. I finished four shots but noted that this power setting isn’t the best for this pellet. The group size was two inches, which made me conclude that I wasn’t using the best setting. I dropped the power and began testing all the other pellets.

Eun Jins at power setting No. 6 did even worse than they had with the power set all the way up, so I shelved them for another day. Next, I backed off the power setting to No. 3 and tried RWS Superdomes. They didn’t even want to stay on the paper at 25 yards, but I’d noticed that they were very loose in the breech — the only pellets that were loose in this gun.

The reason I backed off the power is that these pellets are all lighter than the Eun Jins, and I didn’t want to distort them with too much of an air blast. If there was any tendency toward accuracy, I could tweak the power setting at any time.

Gamo Pro Magnum pellets teased me at the No. 3 power setting, but there was still one flyer that opened the group too much. They deserved more attention, but after two similar “teaser” groups, I moved on.

The next pellet I tried was the .25-caliber Benjamin dome. It has no special name; but in this pistol, it certainly deserves one! These pellets were phenomenal, grouping around a half-inch time after time. 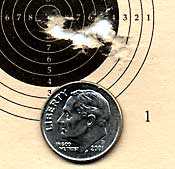 At power setting No. 3, these Benjamin pellets made this great 0.556-inch group. This is one of three similar groups with this pellet!

The last pellet I tried is the one AirForce believes was used to kill a prairie dog at 100 yards with a TalonP pistol a couple weeks ago. Watch for a YouTube video of that hunt soon. The 31-grain Beeman Kodiak Match dome is just about the ideal weight for an airgun of this power; it can handle the power, yet has the weight to deliver the punch downrange. 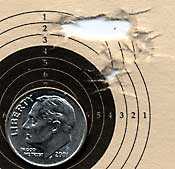 Best group of a day that was filled with good groups was this set of five Beeman Kodiaks that went into 0.554 inches.

So far, what do you think?
Well, I was wrong about the TalonP. It isn’t for wide-open shooting at all. It is an accurate air pistol with plenty of finesse for every accurate pellet that can be found. The fact that it also has stunning power should be secondary to its utility as a hunting airgun. That’s just what I think to this point!

Oh, and about the air use — you can forget all the worrying. I consistently got 20 shots at power (not the highest power, but power setting No. 6) and 25 shots at the most accurate setting (power setting No. 3), so far. There’s so much to learn about this airgun, and I’ve only started with today’s report. Now that I know which pellets are accurate at which settings, I can test those for velocity, so this report can be bounded in some sensible way.

There’s a lot more to come!