Browning’s new Buck Mark URX air pistol has a lot going for it.

The Browning’s Buck Mark URX is another cool pellet pistol I saw at the 2012 SHOT Show and wanted to test for you as soon as it became available. This pistol is a single-shot breakbarrel (the packaging says it has a “one stroke cocking mechanism”) that has the same general profile of the Browning Buck Mark .22 rimfire pistol, but it is not an exact copy. The single thing that attracted me to this pistol is the velocity — an advertised 320 f.p.s. with lead pellets and 360 f.p.s. with lead-free alloy pellets. That tells me the gun cocks easily and should have a very smooth firing cycle, and that, in turn, promises good accuracy! I can only hope!

This is an inexpensive air pistol. It comes in a blister pack that’s designed to hang in a standard store wire rack. The appearance may put off some shooters who feel that they can’t get quality in an airgun this inexpensive, but we have the Beeman P17 single-stroke as an example of one that does deliver. So, I’ve learned to reserve judgement until all the testing is completed. The recent lesson of the Winchester M14 rifle reminded me to hold my opinion until all the cards are dealt!

I’ll tell you how engaging this pistol is. When I first picked it up, it wasn’t 5 minutes before I’d cocked it and fired the first shot. The barrel breaks open easily, and no cocking aid is required. The piston stroke is longer than you might think, and the barrel keeps on coming down and back for a long time. That tells me the piston stroke is where the power comes from, so the mainspring can be relatively light. 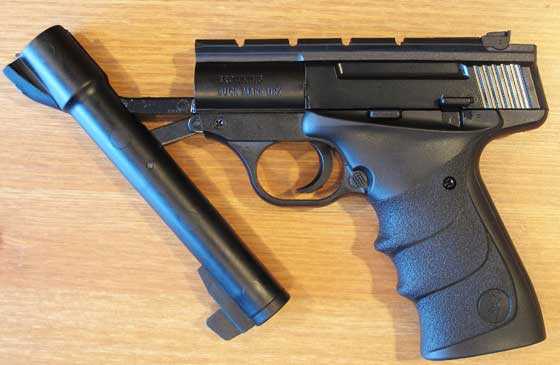 The Buck Mark URX breaks open farther than you expect. This tells us the piston stroke is long.

The cocking link is in two pieces, which allows the cocking slot to be very short. In the case of this pistol, it’s non-existent, as the link feeds straight back through a slot in the frame. That gives the frame more rigidity, which in turn reduces any vibration. This gun is low-powered, so there won’t be a lot of vibration to begin with. And with this design, it should be very smooth.

The safety comes on every time the pistol is cocked, and the lever is placed perfectly for right-handed shooters to release it with their thumb. In every other way, this pistol is entirely ambidextrous; and I went so far as to cock and shoot it in my left hand! The safety comes off easily with the trigger finger of a southpaw, so I don’t want to hear any complaints to the contrary. 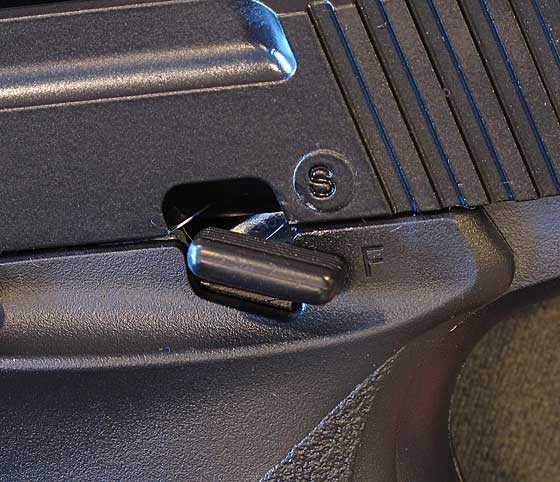 The safety pops up automatically when the pistol is cocked. Right-handed shooters will also find it handy for resting the thumb.

Naturally, the exterior of the gun is all plastic except for a metal trigger, a metal safety switch and a couple screw heads. You have to accept that in an airgun at this price level; but as the Beeman P17 taught us, it doesn’t mean the gun can’t also be a great target pistol.

The sights are traditional (aka not fiberoptic — thank you, very much!) and the rear sight adjusts for both windage and elevation. Neither adjustment has a detent, but the windage adjustment does have a small scale for reference. You can watch the sight elevate simply by looking at it from the side as you adjust it. 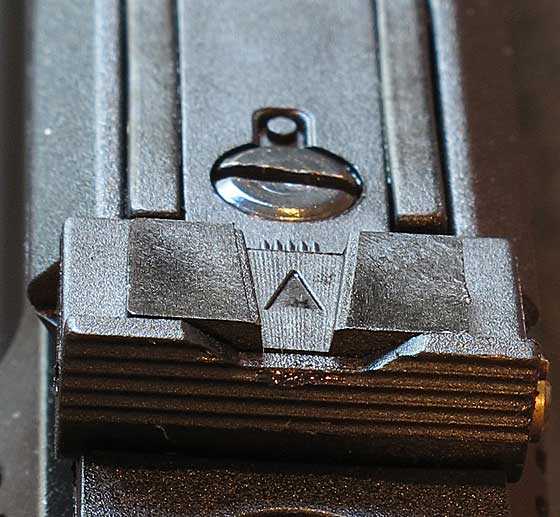 The rear sight has a small scale for reference when adjusting the windage.

The top of the gun has a Weaver base molded in. It looks like a Picatinny, but the cross-slots are 3.5mm instead of 5mm, so it’s definitely Weaver, only. That means you can mount optical sights, of course; and if I see the accuracy to warrant it, I may try that.

The pistol grip is raked back at a good angle for pointability, and there are finger grooves at the front. I find that a good hold is gripping the gun naturally and hooking my thumb over the safety switch — not unlike the hold I would use for a 1911 pistol.

The pistol weighs a pound and a half, which is on the light side for best accuracy, but I’ll know more about that when I shoot it. For now, all I can say is that it’s a very light air pistol.

What appears to be the barrel from the outside of the gun is actually a plastic shell enclosing a thin steel tube. I have no problem with that, because many air pistol barrels are similar; but this one ends six-tenths of an inch before the end of the jacket. There’s no “technology” (baffles or compensator) forward of the true muzzle, so this step was obviously taken just for looks.

For some reason, the barrel of the test pistol is very dirty. I look at a lot of airgun barrels, and it’s rare to see a dirty one like this. I will definitely clean it with a brass bore brush and some JB Bore Paste before doing any further testing.

Everywhere I look on this pistol, I see the thought that went into the design. For instance, the spring-loaded detent that locks the barrel shut is located above the breech rather than below. It’s a cone-shaped detent that seems to combine the smoothness of a ball bearing with the more positive lock of a chisel detent. The important point is that it doesn’t take a slap to open the breech for cocking the gun! It’s the detent we all like. 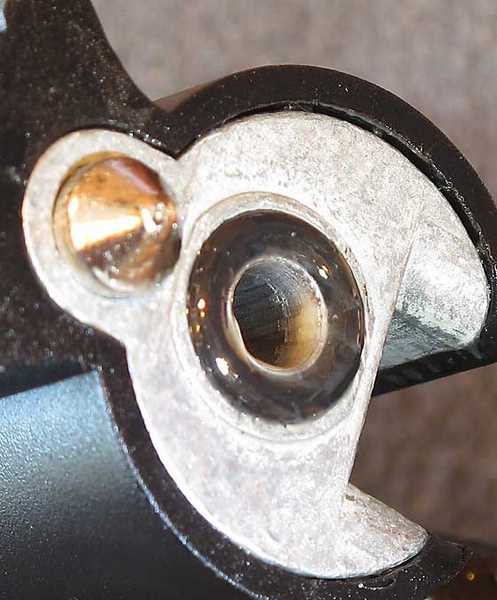 Here you see the unique locking detent and the leade (taper) in the breech that allows easier pellet insertion.

And the innovation doesn’t end there. The breech is relieved with a leade (taper) for easier loading! This, on an air pistol that sells for under $50 — but you won’t see it on some air rifles costing $350 and more. It’s a small thing until you try to load the gun 200 times in one session. Then, it spells the difference between a numb thumb and one that feels normal.

Another hint of someone who cares is the fact that, the moment the breech is opened, there’s spring tension on the barrel. There’s no fraction of an inch slop between opening the barrel and where the cocking arm is under tension. It’s a small thing; but in many spring-piston rifles, it can cost a lot of money for a good tuner to get the same thing.

Yes, I already know what the trigger pull feels like and how the shot cycle feels, but you have to wait for them. All I can tell you at this point is that I am smiling!