This is going to be a long report. How long, I can’t say at this time because I’m sure I don’t know everything we’re going to do. Many airgunners have wondered openly how the twist rate of the rifling affects how their guns shoot. But wonder is as far as it’s gone because I’m not aware of any test report that’s ever been written on this subject. Indeed, whenever we get on the subject of twist rates, the equations start flying and we all lean back in our easy chairs while we ponder the implications. But nobody ever seems to do anything concrete to answer the question. That ends today.

What is twist rate and what does it do?
First, let’s all understand what we’re talking about. As a pellet travels down the barrel of an airgun, it’s held by ridges called lands that run along the inside of the barrel. These lands stick up in the barrel and twist in a spiral, engraving the sides of the soft lead pellet and making it spiral as it moves forward. The twist rate is how far the pellet must travel in the bore to make one revolution. A 1-in-10-inch twist rate means that the pellet is turning one complete revolution for each 10 inches of barrel it traverses. That twist rate is written as a ratio — 1:10 inches.

Spinning helps stabilize a pellet in flight. Just as a bullet is made stable by spinning on its axis like a top, a pellet is also stabilized the same way. But pellets of the diabolo design (hollow tail and wasp waist) are also stabilized by the high drag of their tails and the forward weight bias of their design (i.e., more weight in the head than the tail). So, spin is just one of the things that helps stabilize a diabolo pellet in flight, and exactly how much spin it takes is the question we’re discussing. We also want to know what the other effects of the spin rate might be. For instance, does a faster spin slow down the pellet because of greater friction while it’s inside the barrel?

The most common twist rate
When pellet guns were first rifled, they were given the twist rate that was common for the .22 long rifle cartridge at that time, which is one complete turn in 16 inches of travel in the barrel (written as 1:16″). If there was any experimentation with other rates, nothing’s been written about it; so, the pellet gun twist rate has been 1:16″ since the beginning — about 1905. That holds true for all four smallbore calibers (.177, .20, .22 and .25).

I can’t say for certain if other twist rates have ever been used. I hear reports of other rates, such as 1:14 inches, but no proof is ever offered. My thought is that perhaps these other rates are obtained from people incorrectly measuring the twist rate. The simplest way of measuring the twist rate in any rifled gun is to make a mark on a cleaning rod, then pass a wire brush down the bore of the gun on the end of that rod and note how far it goes before the rod makes one complete turn. This method is makeshift, to be sure, but it’s accurate enough for a rough estimate.

I don’t doubt that other twist rates have been used at times, but the makers of those barrels have not made a point of mentioning it in their promotional literature. Twist rate is something airgun writers have elected to ignore over the years, perhaps not finding the subject worth discussion since all airguns seem to have the same rate.

A few of us, though, have wondered what might happen if the twist rate was changed. Since the only way to tell is to test barrels with different twist rates in the same gun, and since nobody makes barrels of different twist rate for airguns, the question has remained unexplored until now. Some time ago, airgun maker Dennis Quackenbush approached me and asked if I would be interested in conducting such a test. I said yes, and we both settled on the Talon SS from AirForce Airguns as the ideal testbed because the barrels can be exchanged so easily.

The experiment
Dennis made two barrels for my Talon SS. Both are .22 caliber, which is also the caliber of the factory Lothar Walther barrel in my gun. He made these barrels from scratch. They’re cut-rifled, which means that each groove is individually cut. Doing it that way, he was able to use a sine bar (a tool used to measure angles) to control the rifling pitch that results in the twist rate.

Talon SS factory barrel (center) is flanked by the two barrels made by Dennis Quackenbush for this test. 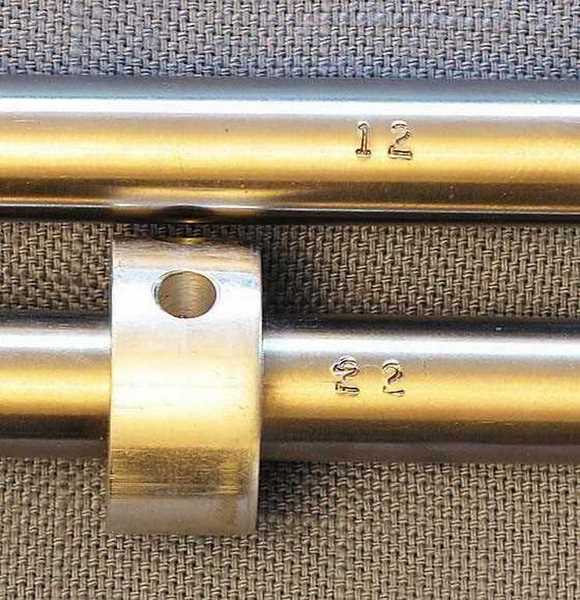 Dennis marked each barrel with the twist rate. The top is 1:12 inches and the bottom is 1:22 inches. 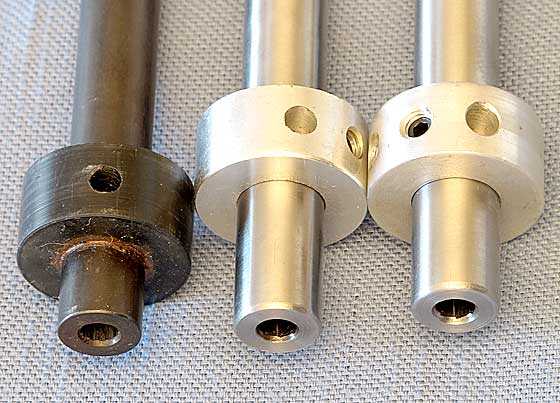 In the other barrel, he put a 1:12″ twist. That was for no reason other than it’s far enough from 1:16″ and 1:22″ twist rates that there ought to be some differences that can be observed. One curious sidenote to this test is the fact that Aguila makes a special subsonic .22 long rifle cartridge that has a 60-grain bullet. To stabilize that bullet that leaves the muzzle at around 900 f.p.s., a rifle has to have a 1:10″ twist rate. There are special barrels made for the Ruger 10/22 rifle for just that round. Like the Talon SS, the 10/22 has a barrel that’s quick and easy to change.

The most common method of rifling barrels these days is button rifling, in which a hardened “button” is either pushed or pulled through the bore, cutting all the grooves at the same time (actually, it doesn’t cut the metal so much as it “irons” the steel into the desired shape). The button must be made for a single twist rate, taking into account the thickness of the barrel walls and the type of steel in the barrel because the steel springs back a little after the button has passed through. So, the spring rate of the barrel steel must be controlled by the size and shape of the button, as well as the type and thickness of barrel steel, itself. Using a button is a very fast way to rifle many barrels, but it limits you to just one twist rate per button.

Cut rifling is therefore a slower process but does give the barrel maker more flexibility over the type of barrel he makes. Dennis didn’t put a choke into his barrels because we aren’t interested in their ultimate accuracy. But the factory Lothar Walther barrel is choked. So, this will not be a test that pits the accuracy of the Quackenbush barrels against the Lothar Walther barrel. We’ll be examining accuracy potential, but only so far as one twist rate seems to have an advantage over the other with a given pellet at the same power setting. If something interesting pops up, we may wish to explore it further with other barrels in the future.

AirForce helped, too
Dennis contacted John McCaslin of AirForce Airguns for some of the critical dimensions of the barrels. John shared these with him and also provided the bushings for the barrels he made. Even though they were made 12 years after my SS was made, these bushings fit my rifle perfectly.

Test objective 1
The first test objective is to determine the effect of a different rifling twist rate on the accuracy of various pellets at various velocities with barrels of different twist rates. All three barrels will be considered, but we’re really interested in the results of the two barrels supplied by Quackenbush. I can’t say that the factory barrel will be used as a control because it’s made differently than the two barrels Dennis has made (different rifling method and it’s choked). But the data will be included in the test report simply because it exists and may be of interest at some point. Any poential accuracy differences will be noted.

I’ll conduct this test at 25 yards and again at 50 yards. That will tell us how the different twist rates perform at different distances.

Test objective 2
Another factor that airgunners have talked about for a long time is the effect of twist rate on velocity. This discussion has been limited to big bore airguns because, as I’ve noted, all smallbores have the same twist rate. The popular theory is that a faster twist rate will result in a slower bullet velocity when everything else is the same. I’ll test the barrels at different power settings for each pellet I test.

What we’ll get from this test is a broad look at how the twist rate of a rifled barrel impacts (or doesn’t impact) the overall performance of pellets in a gun whose baseline performance we already know very well. I’ve thought long and hard about what would be the best way to conduct the test. Do I test the velocity first and then the accuracy? Or do I turn it around and test accuracy before velocity? I have a plan in mind, but I’d like your input before I start the testing. Remember that I already have a lot of good data on this rifle using the factory barrel.

Summary
As far as I know, an experiment like this has never been published before. Perhaps it’s been done, or perhaps parts of it have been done. If so, they didn’t put it in print. Neither Dennis nor I know how this will turn out. As he says, we’re pushing back the boundaries of ignorance in airguns.

I’d like to thank Dennis Quackenbush in advance for the work he’s done to make this test possible. I also want to thank AirForce Airguns for their part in what we’re about to do.

89 thoughts on “How does rifling twist rate affect velocity and/or accuracy? Part 1”